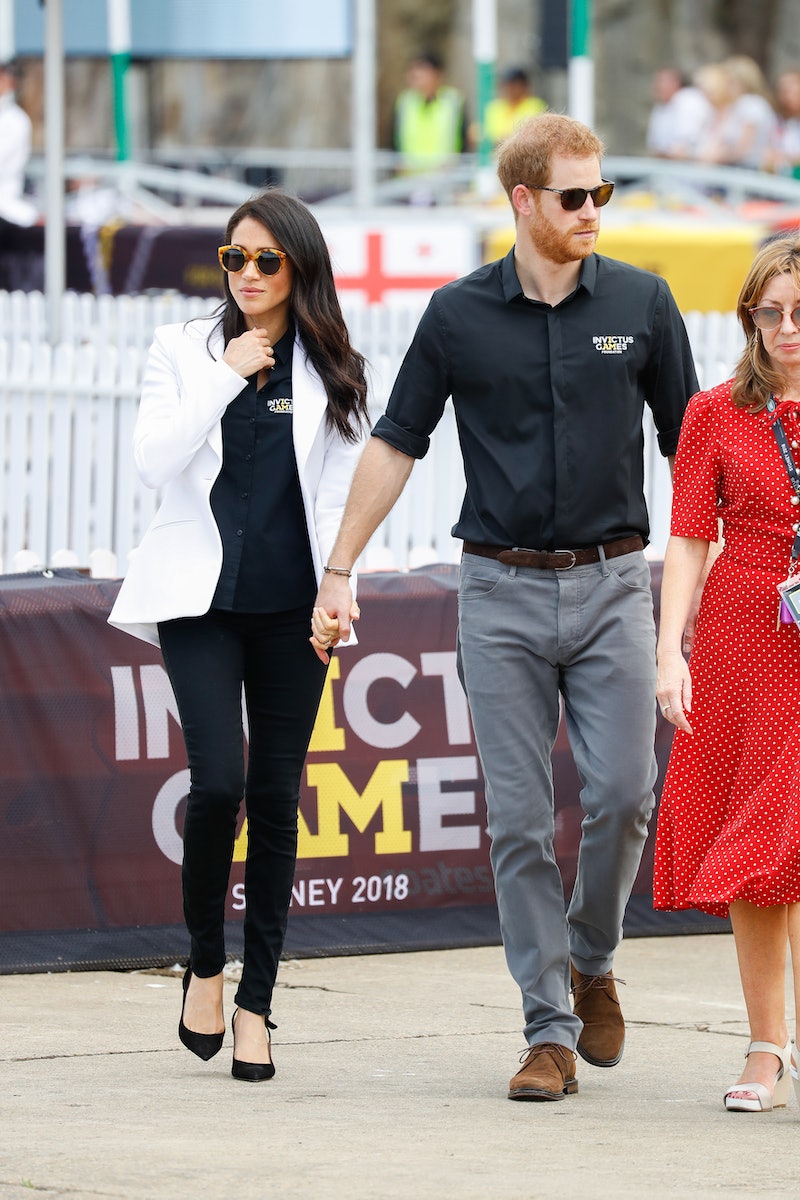 When it comes to royal fashion, you may associate style with luxury brands and fancy hats. However, that's not always the case, especially with Meghan Markle. The Duchess of Sussex knows how to rock casual chic, and now, Meghan Markle's Mother jeans are 30% off during the Nordstrom Anniversary Sale. If you've been wanting to pick up a pair of denim from Markle's favorite jean brand, now is officially your chance.

If you haven't heard (but if you're a lover of all things online shopping you probably have), the Nordstrom Anniversary Sale is happening right now, and there are some serious discounts on everything from cosmetics to skin care to fashion. One of those discounts just happens to be on one of Meghan Markle's favorite brands: Mother.

Currently, a pair of black Mother jeans are up for grabs at 30% off, but if you want to snag them, you'll need to do it soon. The Anniversary sale ends on Aug. 4, and there are only a few pair left. While the Pixie Ankle Skinny that are on sale aren't the exact pair that Markle has worn in the past, the only difference is that instead of a zip fly, this pair has buttons, so you can still totally twin with Markle in these.

Most recently, Markle wore the black pair of Mother denim in Australia with her husband Prince Harry. The pair were attending the outdoor portion of the Invictus Games, so of course, Markle went more casual. According to Fashionista, she was wearing the Looker style in the Not Guilty wash. While the front of the jeans may be just slightly different than those on sale at Nordstrom right now, the look and cut are the exact same.

If you're just not feeling black jeans, don't worry. There are other pairs on sale as well. While Markle hasn't worn them, the brand also had its Looker style with a racing stripe down the side at a discount. As of press time, they are sold out. Then, there are the jeans that Nordstorm has on sale outside of the anniversary deals, and one pair in particular may look familiar to Markle fans.

The Markle and Mother connection initially began when the former actor attended the 2017 Toronto Invictus Games with Prince Harry. Her distressed ankle-length jeans from Mother were an instant hit and generated a 400 person waitlist. While Markle's exact denim from that day aren't up for grabs at a discount on Nordstrom, another incredibly similar pair are available.

While not part of the Nordstrom Anniversary Sale, this pair of distressed skinny jeans from Mother is still discounted and ring in at 40% off the original retail price. While a slightly different wash, they're incredibly similar to the pair Markle is most well known for wearing.

If you want to get your hands on some Meghan Markle approved denim, head over to Nordstrom now. With a few pair already included in the Anniversary Sale and more reduced outside of the event, it's definitely time to start stocking up on denim for fall.

More like this
Harry Styles’ Red Carpet Looks Have One Thing In Common
By El Hunt
15% Pledge Director LaToya Williams-Belfort On The Impact Of Supporting Black Business
By Dominique Norman
Gigi Hadid Has Been Wearing UGG Boots Nonstop At Paris Fashion Week
By Dominique Norman
How To Wear A Bucket Hat Like Rihanna, Dua Lipa, & More
By Allie Fasanella
Get Even More From Bustle — Sign Up For The Newsletter