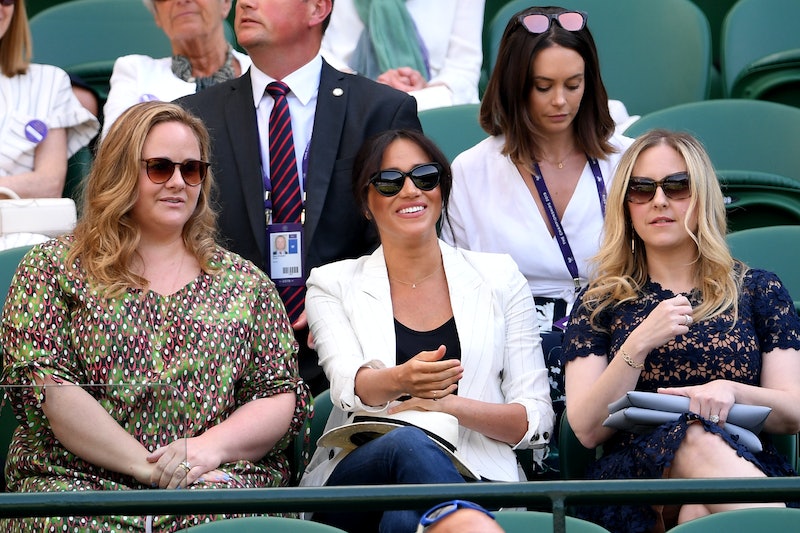 Meghan Markle loves a good pair of jeans, at least if her past fashion choices count for anything. In fact, the Duchess of Sussex has had several pair go viral after wearing them. Now, the jeans Meghan Markle wore at Wimbledon have been identified, and it turns out that she's rocked them before.

According to a press release from the brand, Meghan Markle's jeans are from Outland. The ethical denim brand appears to be a favorite with Markle as she's worn them a major seven times since her engagement to Prince Harry. The choice of Outland makes total sense for the Duchess as the denim brand employs vulnerable women in Cambodia who have graduated from their training program thus providing a living wage, job training, and experience to those who have escaped slavery and exploitation.

Markle's exact jeans from Wimbledon are the Harriet style in the Byron Tonal color way. There's good news about the denim. The pair are still available on the Outland website for under $200. The skinny jean style is a classic, high-rise and is actually Outland's most popular denim style according to the website. The only downside is that the size range is not incredibly inclusive only extending to about a US size 18 (34 in Outland's sizing).

However, if you love the jeans and want to cop Markle's style, you still can.

According to the Outland website, the denim retails for $195.

If you follow Markle closely, especially her style choices, you'll likely recognize the name Outland from her trip to Australia and New Zealand back in October 2018. During her time there, the Duchess of Sussex practically lived in the Outland Harriet jean though in a black wash. In fact, she wore the denim four times while traveling.

Markle first wore the jeans while in Dubbo, New South Wales where she paired them with a blazer from friend Serena Williams' clothing line. She continued to wear them throughout her visit rocking them while sailing and during other appearances according to website What Meghan Wore.

Outland isn't the only denim brand that Markle has been linked to, though. There's another pair that people know the Duchess of Sussex for wearing, Mother Denim. Back in September 2017 when Markle and Prince Harry went public with their relationship, they appeared together for the first time at the Invictus Games in Toronto. For the evening, Markle wore a slightly distressed pair of light wash jeans from Mother, and they almost immediately sold out.

The denim was so popular that it didn't restock until March 2018 where the Love Gun Ankle Fray jeans garnered a 400 person waitlist and yet again sold out. Then, they finally popped back up in June during another restock. Like the Outland jeans, Markle doesn't just wear a brand once. While in Australia, she wore a black pair of Mother denim when not rocking Outland.

Clearly, when it comes to jeans, Meghan Markle knows how to pick them. If you want to emulate her Duchess style, her Outland jeans from Wimbledon are still available and ready to shop on the brand's website.