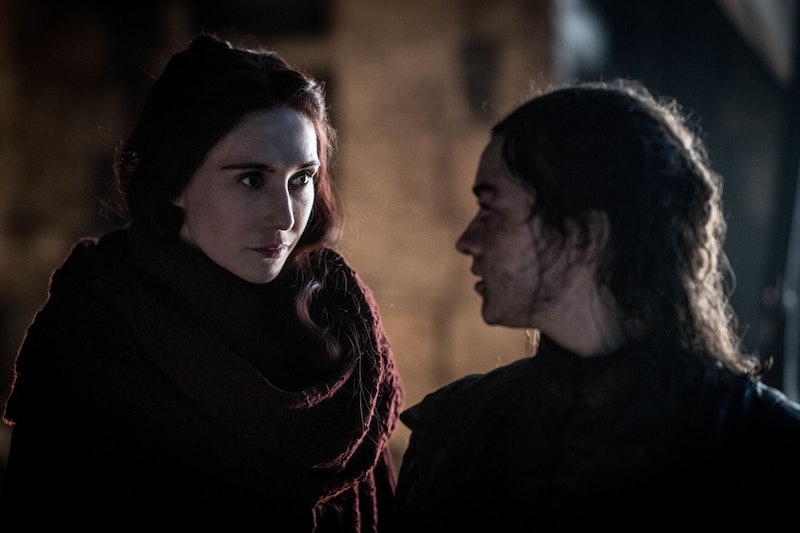 Spoilers for Game Of Thrones Season 8 Episode 3 ahead. Turns out, there could be more to Melisandre's prophecy than meets the eye, quite literally. When Melisandre reminded Arya of the Season 3 conversation they had about "brown eyes, blue eyes, green eyes" in "The Longest Night," many fans — not to mention Arya herself — interpreted it to be about the icy blue eyes of the Night King. But, now fans think that Melisandre's "green eyes" prophecy is a hint that Arya will kill Cersei.

“I see a darkness in you," Melisandre told a young Arya when they first met in Season 3. "And in that darkness, eyes starring back at me. Brown eyes, blue eyes, green eyes. Eyes sealed shut forever. We will meet again.” And in Season 8, they did. These words helped Arya kill the Night King, taking him out with a Valyrian steel blade, saving Winterfell, and perhaps all of mankind. (And possibly, revealing that Arya is the Prince Who Was Promised, depending on who you ask.)

However, this prophecy Melisandre had about Arya is still unfinished. Arya may have taken out the blue eyes, but what about those others eyes the Red Priestess said she was destined to shut forever? Well, according to Time, the green eyes in question could very well be Cersei's, since the Lannisters are known for their blond hair and green eyes. The current occupant on the Iron Throne could be destined to be taken out by Arya. And what do you know, Cersei is still on Arya's Kill List, so she could kill two goals with one sword.

It also doesn't hurt that Arya has clearly put a lot of stock in what Melisandre says. In Sunday's episode, when the priestess told her she would take out blue eyes, Arya realized that she needed to kill the Night King. Knowing that Cersei might also be part of this prophecy might mean she's willing to do anything to kill her.

After all, Cersei has done a lot to hurt her and the Starks, including trying to kill Arya's direwolf, Nymeria, and treating Sansa like a prisoner. And Cersei may not have killed Arya's dad Ned Stark, but she certainly did nothing to stop it. There's a lot of bad blood there that Arya might want to spill.

There have been many guesses on who might kill Cersei, and there are plenty of clues that Arya could be the one to do it. For instance, Maggy the Frog's prophecy that Cersei will be choked to death by the "valonqar," which is a High Valyrian word meaning "little brother." The belief was that this prophecy was about her actual little brother Tyrion, who isn't really a fan of his big sister. However, Arya could also fulfill this rather vague prophecy, being that the Valyrian language uses a lot of gender neutral words. For instance, "prince" could also mean "princess," which means "little brother" could also mean "little sister." Arya might not technically be Cersei's little sister, but she is a younger adversary that is a little sister to Sansa Stark. Not to mention, she could be the Princess Who Was Promised. Basically, whether Cersei realizes it or not, there's evidence that she should be scared of Arya.

It's important to note that Cersei isn't the only one with green eyes. Daenerys Targaryen also has green eyes, and she's causing problems for Arya's big sis Sansa, which could be enough to end up on the younger Stark's hit list. Not to mention, Khaleesi has been showing signs that she might not be the kind of ruler the Seven Kingdoms needs.

Fans are already guessing that Dany might become the Mad Queen (or possibly, the Night Queen), which means Arya might have no choice but to take out this green-eyed mother of dragons. After all, Arya told Ed Sheeran and the rest of the Lannister army last season, "I'm going to kill the queen," and she never said which one.

If she was to kill Dany, a fan named @oliwierkalina guessed on Twitter that Arya could become the new Kingslayer, taking the title from Jaime Lannister, who killed Daenerys' father.

Yes, this is a lot to take in. But it's clear Arya's on a mission and anyone and everyone with green eyes should be on the defensive.