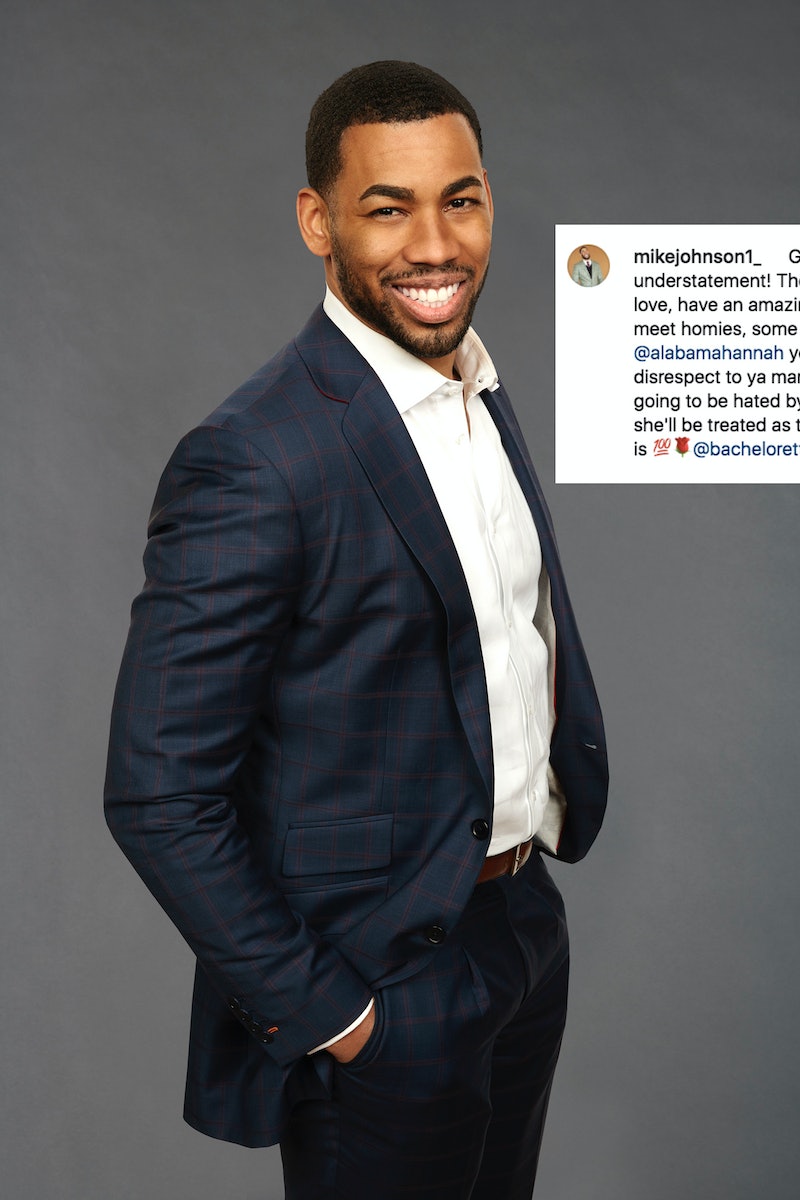 It was tough to watch Hannah eliminate Mike on The Bachelorette on Monday night. He was one of the good ones. While he didn't find love with Hannah, a bunch of franchise alums think Mike should be the next Bachelor. And who could blame them? He was actually one of the few guys on the show there "for the right reasons." Even Mike's goodbye message on Instagram was on point.

Along with a series of photos, Mike told his followers,

"Grateful is an understatement! The opportunity to find love, have an amazing adventure, and meet homies, some for life is a blessing. @alabamahannah you know you fine, no disrespect to ya man. My future wife is going to be hated by all her friends bc she'll be treated as the queen I know she is."

It's really that last sentence that stands out though, the one about finding his future wife. He's ready, you guys. This could mean that he's going to pop up on Bachelor in Paradise this summer. Or maybe, just maybe he's open to being the lead on the next season of The Bachelor.

No matter how Mike reappears on reality TV, the fandom will be on board, but there are definitely plenty of Bachelor and Bachelorette alums who think Mike should hand out roses on his own season.

Here's a round-up of all the support he's received from those who know the series best.

Bachelor fan-favorite Jade Tolbert kept it simple and just commented with the hashtag "mikeforbachelor." As one of the most liked people from the franchise, if Jade believes Mike should get his own season, other people are bound to agree. And they do!

Mike's fellow Bachelorette contestant Luke Stone, aka Luke S., thinks he would be a great lead. And he's not wrong.

Garrett, who got eliminated during the same episode of The Bachelorette that Mike did, is also trying to get the hashtag trending.

Even though Matt Donald only appeared on one Bachelorette episode, he can't help being invested in the future of the franchise. If he could cast a vote for the next lead, it would be for Mike.

There were a lot of people who commented on Mike's Instagram post about The Bachelor, but there were also some former Bachelor cast members who made posts of their own about this. On July 2, Bachelorette alum Rachel Lindsay posted a video to her Instagram Story declaring that Mike is the best choice to be the Bachelor.

Even before Hannah sent Mike home, former Bachelor Nick Viall showed support for Mike nabbing the lead role next season. Nick has been on two Bachelorette Seasons, Bachelor in Paradise, and his own season of The Bachelor. He knows what he's talking about. Mike Fleiss, are you listening?

Evan Bass couldn't help getting upset over Mike's goodbye during Monday's episode. One thing that could cheer him up? Mike becoming the Bachelor. Same here, Evan. Same here.

Mike is just looking for a fourth lady to join his sister, mother, and grandmother as the most treasured women in his life. Why not search for that special lady on a reality TV show? Especially since there are so many franchise alums who want Mike to be the Bachelor.