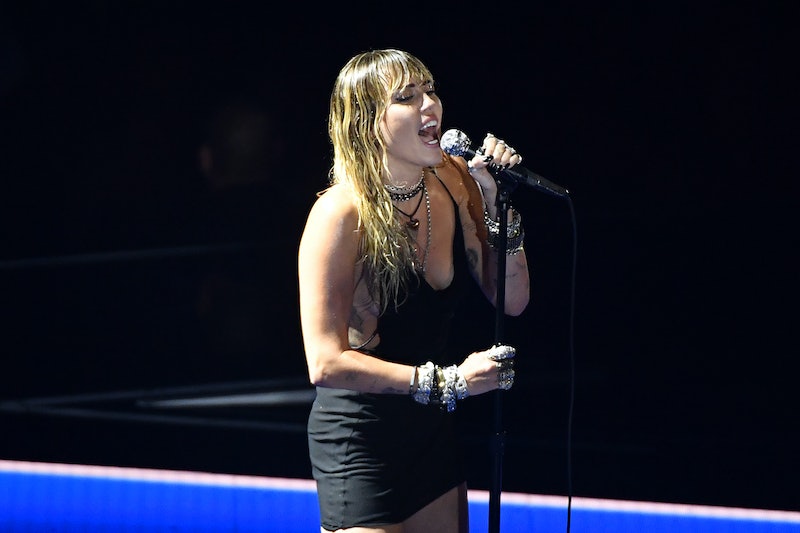 Miley Cyrus has had a few notable VMA performances over the years, like when she twerked on stage with Robin Thicke back in 2013. But Cyrus' 2019 VMAs performance was buzzy for another reason, since she performed "Slide Away" live for the first time after her split from Liam Hemsworth. The song was released just days after their separation became public, and the "Slide Away" lyrics seem to address why they broke up. Beyond the song, Cyrus has been open on social media about the reasons behind their impending divorce. But her "Slide Away" VMAs performance gave audiences a raw rendition of the personal track.

After her split with Hemsworth was announced, Cyrus had been spending some time away on a trip to Lake Como accompanied by her sister Brandi Cyrus and friend/potential new romantic interest Kaitlynn Carter. But she was back in the spotlight at the 2019 VMAs — even if it was a rather stark spotlight. Her "Slide Away" performance was presented in black and white to TV audiences with instrumentalists beautifully lit behind Cyrus in a V formation. Their bodies reflected off the stage to create a water effect as Cyrus sang lyrics like "So won't you slide away? Back to the ocean, I'll go back to the city lights."

While Cyrus' 2013 VMAs performance may always be her most famous (or infamous) time on the awards show, she also performed "Dooo It!" in 2015 and "Younger Now" in 2017. But her appearance at the 2019 show on Aug. 26 was significant because of how the timing relates to her personal life. Cyrus and Hemsworth had been together on and off for 10 years and were married for eight months when they announced their split on Aug. 10. On social media, Cyrus denied that an affair was the reason for their breakup and noted that she has made a "healthy decision for myself to leave a previous life behind."

The lyrics to "Slide Away" reflect how Cyrus has said that she and her husband grew apart as they have grown up. "Move on, we're not 17/I'm not who I used to be/You say that everything changed/You're right, we're grown now," she sings. During her VMAs performance, Cyrus' emotional delivery highlighted the deeper meaning behind the lyrics. She also demonstrated how, while she is no longer in a committed relationship with Hemsworth and standing alone in a spotlight, she has the strength to be OK on her own.

Cyrus' parents Billy Ray (who won an award with Lil Nas X earlier in the night) and Tish Cyrus were there in the audience to cheer her on. Miley's performance will undoubtedly leave fans thinking about her separation from Hemsworth all over again. But, as she has made it clear on social media, Cyrus understands that ever since Hannah Montana and growing up with her famous family, her personal life has been public. So while people will continue to speculate about her behavior, Cyrus got to control that narrative with her VMA performance to "Slide Away."

More like this
Selena + Chef Season 4 Was Filmed At Hannah Montana's Old Malibu House
By Jake Viswanath
An Ultimate Guide To The Music Of 'Rap Sh!t'
By Brad Witter
How Lady Gaga & Adele Are Closer To The EGOT All Of A Sudden
By Jake Viswanath
Bridgerton’s Simone Ashley Stars In ODESZA's "Love Letter” Music Video
By Radhika Menon
Get Even More From Bustle — Sign Up For The Newsletter