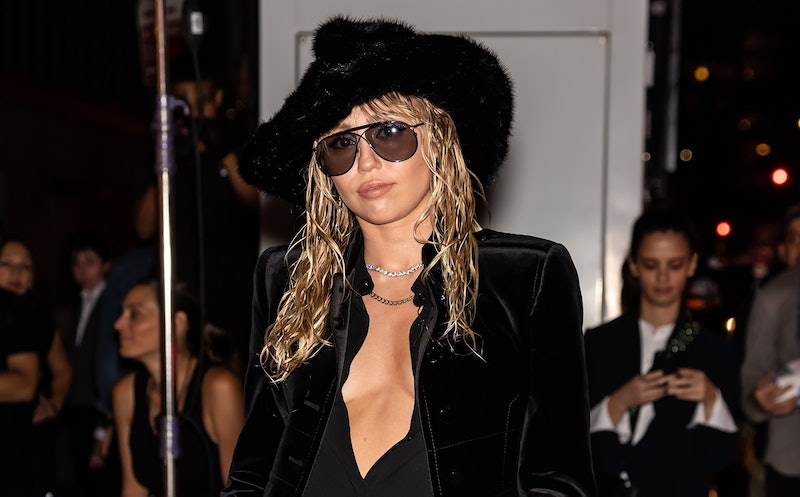 Miley Cyrus is bringing her new beau home for the holidays — and he's already part of the family photos. A day before they were spotted having a lunch date in Los Angeles, Miley Cyrus and Cody Simpson celebrated Thanksgiving with her family, proving that the pair's romance is already getting serious. The "Slide Away" singer's younger sister, Noah, shared a photo from dinner on Thursday, Nov. 28, with Simpson and Cyrus joining the famous family at the far end of the table.

"Extremely thankful for everyone at the table," Noah captioned the black and white photo, which also featured her and Cyrus' older brother Trace and mother Tish. The "July" singer also added that the family was having "a very sober thanksgiving staying hydrated."

Thanksgiving is far from the first time that Simpson has spent time with the Cyrus family; according to People, the "Golden Thing" singer accompanied his girlfriend and her family to a dinner in Nashville, Tennessee, to celebrate Cyrus' 27th birthday. Cyrus has also earned the seal of approval from Simpson's mother, as the Aussie singer's mom, Angie, shared a photo of the happy couple on Instagram on Oct. 13. "Puts a smile on my dial to see you both so blissfully happy," Angie captioned the post. "Hearing your laughs and seeing the smiles on your faces lights up my heart."

When not spending time with family, Simpson has spent much of the past month by Cyrus' side as she recovers from undergoing vocal chord surgery on Nov. 10, per E! News. The singers have chronicled her recovery with plenty of PDA-filled posts on social media, including a since-disappeared video that Cyrus posted on her Instagram Story of herself dancing with Simpson.

The couple — who began dating in early October — have endured a few hospital visits over the course of their relationship. On Oct. 8, Cyrus revealed on Instagram that Simpson came to visit her in the hospital while she was recovering from tonsillitis. He even wrote a song for Cyrus to cheer her up, titled "Golden Thing," which she pushed him to release as a single so that everyone else could hear what Cyrus dubbed "my favorite song in the world."

"I wrote her a song this week that she’s pretty much forcing me to put out," Simpson told People on Oct. 11 about the track. "She was like, 'If you don’t put this sh*t out, I’m putting it out on your behalf for you. I’m getting your Spotify login and doing this sh*t myself.'"

While their relationship might seem to have gotten very serious, very quickly, Cyrus and Simpson have actually been friendly for years, which laid the foundation for their romance. “The reason why it hasn’t been a really crazy sudden thing is just because we’ve been friends for so long,” he told People, adding that he and Cyrus "found each other again in a space where we’re both not partying, working real hard, and it just keeps things healthy and it’s good."

Add to that the seal of approval from both families, and it looks like Cyrus and Simpson's relationship is going strong.

More like this
Kim Kardashian Father’s Day Tribute To Kanye West Called Him “The Best Dad”
By Stephanie Topacio Long
Dan Levy’s Father’s Day Pic Of Dad Eugene Spoofs The ‘Schitt’s Creek’ Vet’s Past
By Grace Wehniainen
Prince William & His Kids Are Adorable In A Smiley New Photo For Father’s Day
By Stephanie Topacio Long
What Is Elvis Presley’s Net Worth? How The King Earned & Spent His Fortune
By Grace Wehniainen
Get Even More From Bustle — Sign Up For The Newsletter