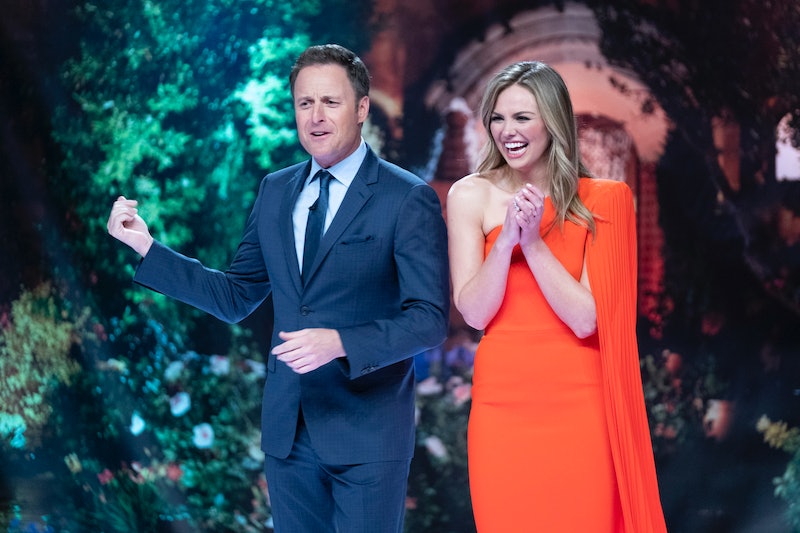 Colton Underwood might have broken all the rules when it came to his finale of The Bachelor since he didn't propose to girlfriend Cassie Randolph. But Hannah Brown is prepared to get things back on track for the franchise. Hannah B. is ready to get engaged on The Bachelorette, according to an interview she gave to People. The article, published Wednesday March 13, followed Colton's "After the Final Rose" finale episode on March 12 where Hannah was announced as the next Bachelorette. At 24 years old, Hannah is the youngest Bachelorette in the history of the show, but that doesn't have any impact on how ready she is for the proposal at the end of the season.

One of the main criteria for being on The Bachelor or The Bachelorette is a desire to be engaged, since the show typically ends with a proposal. Yet, Colton and Cassie flipped the script after she expressed her uncertainty at making such a lasting commitment. Considering how many Bachelor engagements fail (yes, specifically Bachelor ones), it was a refreshing change of pace for a season to end with the decision to date. But lest you think that the franchise would be changing its formula, Hannah told People that she is ready for an engagement. "This is something I really believe in," Hannah said. "And at the end of the day, I want somebody who loves me and chooses me. I'm ready for my moment."

This focus on wanting to be with someone who wants to be with her echoes what Hannah said when Colton sent her home after taking her home to meet his family on Week 7 on The Bachelor. "The desire of my heart is to be loved so fearlessly by somebody," Hannah said at the time. "I will not allow myself to not feel chosen every single day and I'll wait 'til whenever that is."

Hannah valuing her own self-worth really resonated with Bachelor Nation as reactions to her Women Tell All appearance highlighted. This way of thinking will certainly help her be a beloved Bachelorette, but also will be essential on her journey to find lasting love. And based on her comments to People, it seems like The Bachelor assisted with getting her into this mindset. "I didn't end up with Colton, but I ended up loving myself more," Hannah said. "I came into that show as someone who wasn't as open as I am now. I was terrified to be my true self because I felt that it wasn't enough. But I allowed myself to break down those walls."

The very same night of her Bachelorette announcement, she got to kick off her season when five of her contestants showed up to "After the Final Rose." As has happened with other live introductions to the Bachelorette in the past, there were some awkward moments. But hopefully out of the batch of Luke, Dustin, Cam, Connor, Luke S. (apparently, the name "Luke" will be the "Hannah" of this season), and the other contestants, she'll meet someone who values her true self as much as she does.

Based on previous Bachelorette seasons, Hannah's season could be premiering on Memorial Day, which is just two months away. So she'll be meeting those other suitors sooner rather than later. As she told People, she doesn't have a specific type but wants "someone with a good heart." And if she truly connects with a good-hearted man, she very well could end up engaged. To show just how ready she is, Hannah shared an adorable throwback of her as a child dressed in white and wearing a veil-like headpiece on Instagram. "Wish me luck, y'all," she wrote.

While she still has to master handing out roses, Hannah does seem emotionally prepared for her Bachelorette journey. And there are no hard feelings when it comes to her ex Colton and his girlfriend Cassie. "I'm happy for Colton. He was able to choose somebody and it wasn't me, and that's okay," Hannah said. "I've moved on. And I'm excited to find my person." And the world will be rooting her on as she gives finding love on national TV another try.