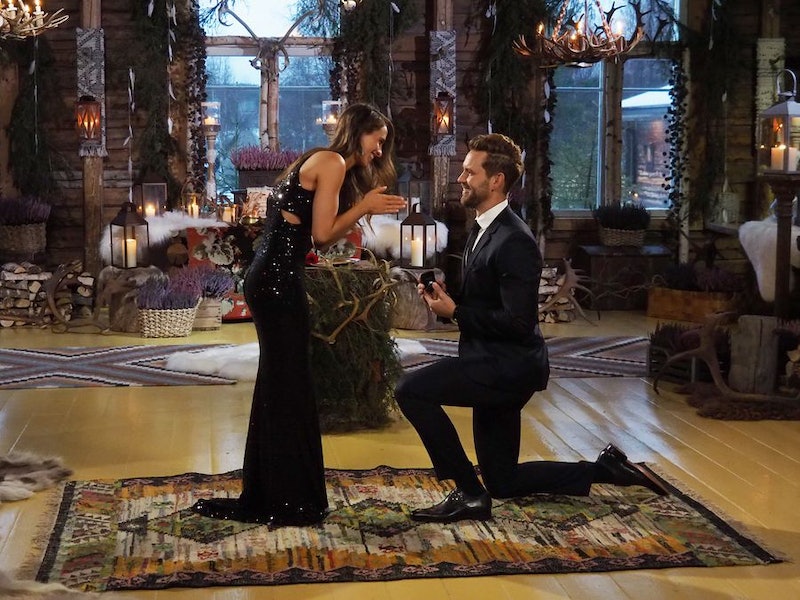 When it comes to whether couples are more successful on The Bachelor or The Bachelorette, you might think the differences are negligible. After all, both are part of the same reality TV franchise, so you'd probably expect them to have similar success rates. But as it turns out, that's not the case. A couple formed on The Bachelorette is a little over three times as likely to succeed as one formed on The Bachelor. Of course, that doesn't mean having a woman at the helm of the decision-making process is a guaranteed home run. A couple that gets engaged on The Bachelorette has just under a one-in-two chance of making it work long term, compared with The Bachelor's one-in-seven shot. And to be honest, even though it may sound low, neither number is that bad. Remember, this is the incredibly subjective and stressful process of falling in love on national television we're talking about.

In its 13 seasons, The Bachelorette has produced six successful couples. Season 1's Trista Rehn and Ryan Sutter have been married since 2003 with two children, Max and Blakesley. After a slight dry spell, Season 7 introduced Ashley Hebert and J.P. Rosenbaum, who married in 2012 and have kids, Fordham and Essex. Season 9 brought Desiree Hartsock and Chris Siegfried together; they walked down the aisle in 2015 and have a son, Asher. Although they have yet to set a date, Season 11's Kaitlyn Bristowe and Shawn Booth remain engaged, as do Season 12's JoJo Fletcher and Jordan Rodgers. And though it hasn't been revealed whom she chooses, Rachel Lindsay ends Season 13 with a ring on her finger. That adds up to six out of 13. Naturally, those statistics may thin out in the future, but this is how things stand right now.

In contrast, the Bachelors haven't fared nearly as well. Even with eight more seasons under its belt, the show has produced only three longstanding unions, and just two marriages so far. In fact, it took 13 whole seasons for the first relationship to even stick: Jason Mesnick and Molly Malaney. And it's worth noting that even Mesnick has an asterisk by his name, because Malaney was not the woman he proposed to in his finale.

That was Melissa Rycroft, whom he broke up with on After the Final Rose, where he also asked Malaney for a second chance. And he got it; the two have been married since 2010 and have a daughter named Riley Anne. The first Bachelor couple to get married off of an engagement in the finale was Season 17's Sean Lowe and Catherine Giudici. They wed in 2014 and welcomed a son, Samuel, last year. And then, of course, there's Nick Viall, who's engaged to Vanessa Grimaldi after the Season 21 finale. The two haven't solidified any wedding plans yet, and there are rumors of a rocky relationship, but so far, they seem to be making it work.

That brings the grand total of surviving Bachelor couples up to three, which coincidentally is also the length of the streak of successful couples that The Bachelorette has going — just to put things in perspective. So whoever takes up the Bachelor mantle next, take this word of advice: Try to think like a woman. Assuming you want a happy marriage and a family and all the joy that comes along with it, that is. If you're interested in an engagement that lasts a few months before quietly imploding, then by all means, keep doing what you're doing.

It's not clear what the secret to Bachelor Nation success is, but the women appear to have found it, so you'd be wise to sit up and pay attention.