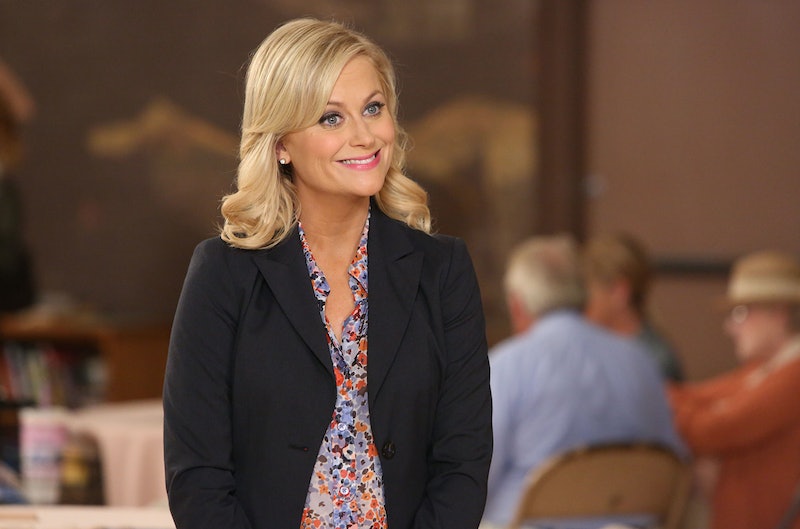 Despite her longstanding adoration of former Vice President Joe Biden, Parks and Recreation's Leslie Knope would be supporting Elizabeth Warren for president in 2020, according to the NBC comedy's co-creator Michael Schur. "Elizabeth Warren would be setting Leslie Knope’s hair on fire right now," he hypothesized of the character played by Amy Poehler from 2009 to 2015 in a Wednesday, Oct. 23 BuzzFeed News interview. He added that he thinks the senior United States Senator from Massachusetts' views "aligns with a lot of what Leslie believed in about the ability of the government when it's functioning well to affect people's lives for the better."

Schur further explained that the women share another thing in common: always having a plan. Noting that Leslie "loved a good binder," he predicted to BuzzFeed that if the character ever ran for president herself (which was left up in the air on the show), "‘I've got a plan for that' would totally have been her slogan."

That's not to say Warren would necessarily have Knope's official endorsement on lock, however, since Schur admitted to BuzzFeed that "there's a lot of candidates that she would like for a lot of different reasons." (In addition to Biden and Warren, frontrunners for the 2020 Democratic presidential nomination currently include: Vermont senator Bernie Sanders, South Bend, Indiana mayor Pete Buttigieg, and California senator Kamala Harris.)

One of those Democratic presidential hopefuls would likely still be Biden, however. Although Schur admitted he doesn't know "what Leslie would think" about Biden nowadays, he said he believes she would still "admire a lot of his sort of roll-up-your-shirtsleeves, fight-for-people kind of attitude." He further explained to BuzzFeed that the fictional character's love for President Barack Obama's VP on the series stemmed from Leslie being "rapaciously, sexually attracted to him" as well as Biden's "kind of plainspoken ... 'man of the people' quality." (Schur added he "can't speak to his physical attractiveness now all these years later, 10 years after the pilot came out.")

On Parks & Rec, Leslie even met her "hero" Joe Biden during a Nov. 2012 episode titled "Leslie vs. April." After predicting she'd be president by 2020 (before deciding 2024 was more feasible) in the episode, Leslie accompanied fiancé Ben (Adam Scott) for her surprise engagement present: a meeting with Biden, who appeared on screen as himself. Poehler's giddy Parks and Rec character even comically interrupted the then-VP to inform him there's no way she could "take over Madam Secretary Clinton's position." As she held his hands, Biden also told Leslie (who referred to him as "very handsome" and "precious cargo") that he wanted to congratulate her for "doing such a good job" in her town and the state of Indiana.

Biden and Poehler later appeared together on Late Night with Seth Meyers' premiere episode in Feb. 2014. During their joint interview, Biden revealed that Poehler had improvised the end of their brief scene together. Recalled the former VP, "She turned to the Secret Service Agent, who didn't know what the hell to do, grabbed him by the lapel and said 'You take care of him!'"

For her part, Poehler has had her own ideas of whom Leslie might support in the 2020 Democratic presidential primaries. During a Variety red carpet interview in March 2019, the actor guessed that her character would likely endorse Midwest candidates, Minnesota Senator Amy Klobuchar or Buttigieg. Poehler said she thought Leslie might like Buttigieg's "underdog status," but also joked that "she'd probably be too busy fixing the bench." (Worth noting: the Variety interview happened before Biden officially entered the 2020 presidential race in April 2019.)

Although Leslie's supposed candidate endorsements are hypothetical, Warren would surely be pleased to have the beloved Parks and Rec character "in this fight" with her.

More like this
Ashton Kutcher Wants Danny Masterson “To Be Found Innocent” In Rape Retrial
By Jake Viswanath
Megan Mullally & Nick Offerman’s Relationship Includes Several Collaborations
By Caitlin Gallagher and Brad Witter
'Abbott Elementary' Fans Probably Missed This 'Parent Trap' Easter Egg
By Sam Ramsden
At 28, Debra Jo Rupp Was Living A Much Different '70s Show
By Grace Wehniainen
Get Even More From Bustle — Sign Up For The Newsletter
From hair trends to relationship advice, our daily newsletter has everything you need to sound like a person who’s on TikTok, even if you aren’t.