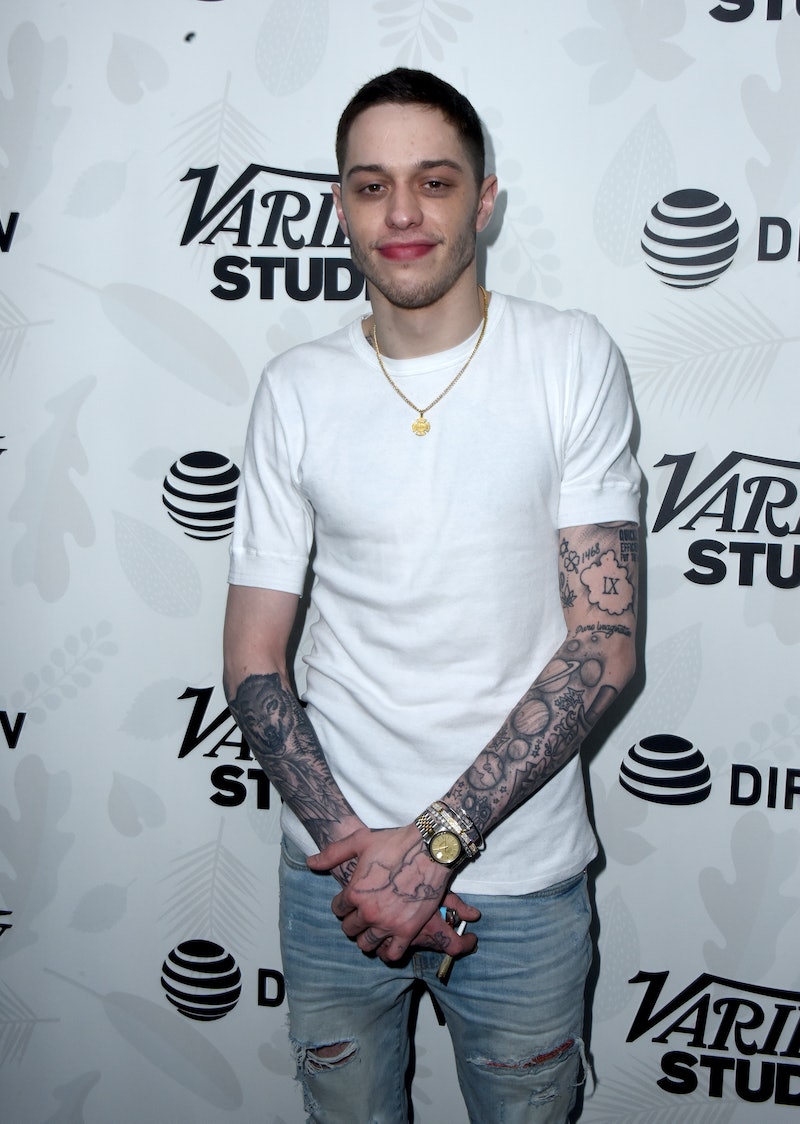 Where there are comedians, there are hecklers. But during a performance on Monday night, Pete Davidson kicked out a heckler who referenced Mac Miller at a comedy show. Audio released by TMZ revealed that while Davidson was performing at South Orange Performing Arts Center in New Jersey on Feb. 25, an audience member yelled out Miller's name, prompting Davidson to reportedly ask him to leave.

Things were already off to a morbid start during Davidson's set on Feb. 25, even before Miller's name was even brought into it. As heard on the audio obtained by TMZ, Davidson was starting a joke that began, "My friend died in my apartment ..." Almost immediately, a male member of the audience can be heard yelling out, "Mac Miller?" — referencing Davidson's ex-fiancée Ariana Grande's former boyfriend, who died from an accidental drug overdose in September of 2018. Davidson the reportedly replied, "Oh Jesus Christ. Who's that guy? We're getting him out."

As clearly heard on the audio, the comedian then refused to continue the set until the person was removed from the audience, asking for other people in attendance to direct security to where the person was sitting. "I'll wait. I will not continue until that kid's gone," Davidson said, per the recording. "I'll leave, so if you want the show to continue, call out the person who did it." He added, "Give him his money back and get him the f*ck out. I don't deal with that sh*t at my shows."

The whole interaction, per the recording, only took about two minutes, and Davidson can be heard trying to keep the humor going throughout. He joked how he didn't feel like he could try out any new material after this insensitive interruption. "I'm gonna have to f*ckin' do jokes that I know will work," he said to laughter in the audience. And once the audience member was successfully found and removed, Davidson said, "I'm gradually trying to get us back up to the f*cking fun-level we were at five minutes ago." Then, per TMZ, he made a Dane Cook joke and continued on with his show.

After Davidson's very public whirlwind romance with Grande, the pair split in October 2018 — just a month after the death of Swimming rapper Miller. Grande and Miller had dated for two years before they split in May 2018 — the same month Grande began her relationship with Davidson. And, as Grande has been open about on social media, Miller's untimely death was devastating for her, and it reportedly took a toll on her relationship with Davidson, something fans think she sang about on her recent track "Ghostin."

Following the end of his engagement with Grande, Davidson canceled some comedy performances. And in December, the comedian deleted his Instagram account, following a very frank post about how his mental health was suffering from all of the bullying and harassment he had been receiving online due to his relationship with Grande.

It's clear, given the situation, that this heckler crossed a line by invoking Miller's name, an apparent attempt to bait the comedian mid-set. By politely asking him to leave, and insisting that he be refunded for his ticket, Davidson took the control away from the audience member and made it clear that comments about the deceased rapper will not be tolerated at any of his shows.