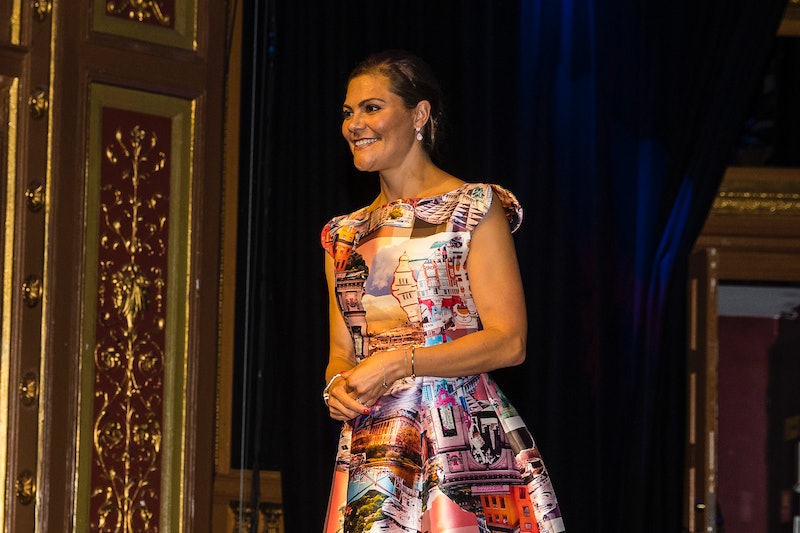 If you've got a closet of flannel, mom jeans, and maybe a choker of two, there's a good chance you're indulging in the resurgence of '90s fashion. Turns out, the revival is way more popular than you may have thought. Princess Victoria of Sweden rewore her mother's gown from 1995, and it's proof that even the most glamorous of pieces from the '90s are back and don't see to be going anywhere.

According to People, Princess Victoria attended the 2018 Nobel Prize ceremony wearing the same dress her mother, Queen Silvia, wore in 1995. Honestly, who would have known (other than People and a royal historian)? The color blocked dress features a bright pink strapless top, a golden yellow sash tied around Princess Victoria's waist, and a voluminous grey ball gown skirt. In description, those colors don't necessarily sound like something that would work together, but in reality, it's a totally gorgeous, vintage (are the '90s considered vintage now), gown.

While Princess Victoria did wear her mother's gown, she chose to accessorize it in a slightly different way. While Queen Silvia wore a large, double chain diamond necklace with the strapless gown back in 1995, Princess Victoria chose to pare down the look and did not wear a necklace. As for her tiara, it's different from her mother's but still an obviously gorgeous accessory — hello, it is a tiara, after all.

Princess Victoria's decision to wear the gown proves that 90s style is still in and can still be worn in a modern way. Plus, how cute is it that she honored her mother by wearing the gown?

Of course, royals sharing styles isn't exactly something new. Outside of the Swedish monarchy, the British royals are also known for wearing family heirlooms and pieces that honor members of the family. Perhaps most notably is Kate Middleton's engagement ring. While it's not a gown from Princess Diana, it is a bit of her memory that Middleton wears daily.

Middleton's sister-in-law, Duchess of Sussex Meghan Markle, has also taken part in borrowing pieces from family members. While some expected Markle to wear Princess Diana's favorite tiara for her own wedding, she chose not to do so, but she still had a bit of the late royal with her for her wedding. During her reception to celebrate her marriage to Prince Harry, Markle wore Princess Diana's gorgeous aquamarine ring on her hand.

Middleton doesn't just wear her late mother-in-law's pieces, though. The future queen has also worn jewelry from her grandmother-in-law, Queen Elizabeth's, personal collection as well. As for Markle, she's worn more from Princess Diana's jewelry. While in Australia, she wore butterfly-themed pieces from her collection.

While sharing jewelry may be great amongst the British royals, Princess Victoria's decision to wear her mother's dress from 1995 is next level kind of sharing. Not only is it a sweet homage, but it's proof that all fashion eventually circles back around to being in style. Right now, it's the '90s turn to head up the trends.