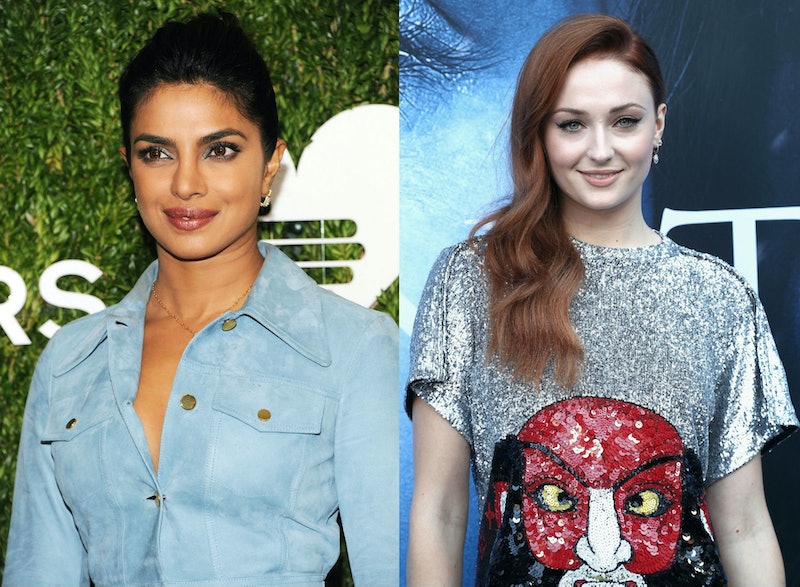 The J Sisters are back at it again. According to People, Priyanka Chopra and Sophie Turner had a dinner date in Los Angeles, and no, Nick and Joe Jonas were not in attendance. Chopra and Turner's latest outing is just further proof that these two have an amazing sisterly bond and that they don't need their respective significant others by their sides in order to hang out.

It seems like ever since Chopra and Nick Jonas got engaged in July 2018, the former Quantico star and the Game of Thrones actor have been inseparable, or at least formed a quick friendship. When Chopra and Nick confirmed their engagement in August of last year, Turner took to Instagram, where she not only shared a sweet photo of the couple, but wrote, "Wow. First I’m blessed with an incredible future brother-in-law, and now such an beautiful, inside and out, future sister-in-law. I’m so excited to welcome you into the family @priyankachopra. I love you both."

The two talents have spent a lot of time together, including ringing in 2019 with Nick and Joe in Switzerland, you know, as one does. They shared plenty of photos, including some top-notch pictures together like the badass women they are in their on-point ski outfits. Be sure to scroll through Chopra's series of images in the below Instagram. Seriously, how amazing do they look? Chopra and Turner should probably star in some type of project together at some point in the future, don't you think?

Of course, prior to her major wedding weekend with Nick, which Turner also attended, the Dark Phoenix star helped Chopra celebrate her bachelorette party in Amsterdam in November 2018. As you can see further down below, they spent the morning wearing eye masks reading "Hungover," which couldn't be more appropriate for the typical bachelorette celebration.

Chopra captioned the adorable photo, where she and Tuner don't look hungover one bit, "The morning after...#TheJSisters #Bachelorette @sophiet."

Yes, she also used the hashtag "#TheJSisters." The nickname "The J Sisters" refers to them both being romantically involved with the Jonas brothers. Chopra, obviously, is married to Nick, whereas Turner is engaged to Joe. Regarding the latter relationship, the singer and GoT star announced their engagement in October 2017. It's unclear when they will officially tie the knot.

Chopra used the same nickname when sharing an Instagram Story of the two during her bachelorette party. Later on that evening, the Baywatch actor posted a video on her story, which showed Chopra carrying Turner on her back through the streets of Amsterdam. In the video, Chopra was heard saying, "In heels. This is what you have to do for sister-in-laws these days!" Yes, in that video, she accompanied it with #TheJSisters hashtag.

It really does make for a great and catchy nickname. It also goes to show you how much they truly care about each other, not to mention appreciate and support one another. Not only did Chopra and Turner gain an entire family when coupling with Nick and Joe, but they also got each other as wonderful sisters.