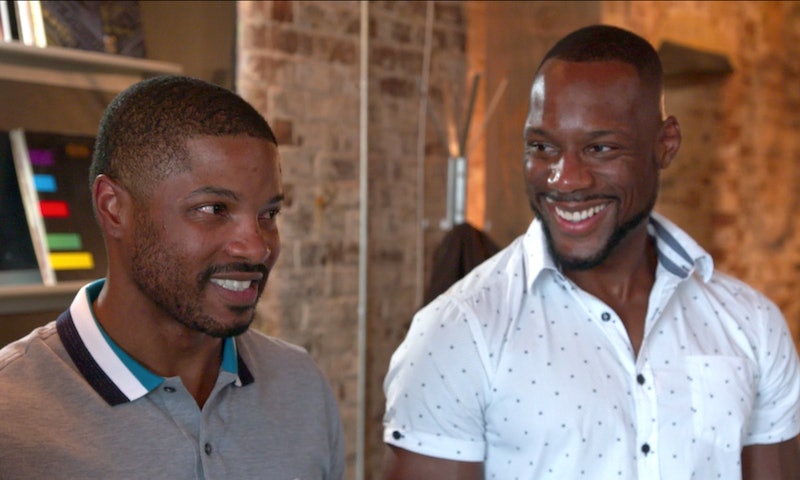 You might've thought you were safe from the tear-jerking moments, at least until Season 2 premieres, but think again. Queer Eye's AJ and Drey are married, according to a tweet from Netflix's See What's Next account, and there aren't enough Jonathan Van Ness GIFs in the world to adequately express the excitement that this news brings. The newlyweds are AJ Brown and his partner Andrey, who were introduced to the world in Episode 4 of Queer Eye's Season 1, which premiered in February.

According to Netflix's tweet, the happy couple sat in with the Fab Five during a May 31 Queer Eye panel at one of the streaming service's awards-consideration events in Hollywood called FYSee. The pair posed with Jonathan, Antoni Porowski, Tan France, Karamo Brown, and Bobby Berk on the red carpet, and later, during the panel, revealed the happy news that they had recently walked down the aisle.

It's especially exciting because the couple's relationship had been under wraps during the time of filming, with part of the goal of Episode 4 for AJ to come out to his stepmother, Haide. He was understandably nervous, but the conversation went so beautifully and smoothly that it contributed to the episode being one of the most emotional of the season.

So when it was announced in February that AJ and Drey were engaged, viewers exploded in joy, and now they're full-on turning to dust with the reveal that the pair have officially tied the knot.

And with Queer Eye's Season 2 premiere right around the corner on June 15, you'd be well within your rights to wonder whether the premiere might give fans a peek at AJ and Drey's special day. It would only be fair, since the details of the happy event are still so scarce. All that was revealed at the panel was that the grooms put a ring on it — not when, or how, or where, or to what music, or what Tan wore, or how many times JVN teared up, or whether the cake was just all avocados, as an homage to Antoni. (Or whether they and the rest of the team was present at all, because, of course, it's up to AJ & Drey, but oh god, what if they weren't?)

The point being that clearly, fans need some more information about the wedding, so cross your fingers that it will crop up next season. And even if it doesn't, don't rule out a full wedding episode appearing as a bonus to the regular season at some point, because AJ and Drey aren't the only Queer Eye couple that got married this year.

Episode 1's Tom and Abby played a little will-they-won't-they with the audience, with the divorced couple reuniting on the season before revealing shortly after its premiere that they'd gone their separate ways. But then, just weeks later, Tom and Abby had reunited, with the on-and-off-couple announcing their engagement just days after that, in mid-March. And by the end of the same month, the Queer Eye couple had remarried, in a private ceremony in Tennessee. Unfortunately, Us Weekly reported that the Fab Five were not in attendance, and Tom tweeted in May that Netflix didn't send any cameras to capture footage of the ceremony, either.

But while it's a bummer that the streaming platform doesn't seem to have been present either of these two occasions, that just gives even more reason for a follow-up episode featuring one or both pairs, so stay optimistic.

At the end of the day, Queer Eye is quite literally bringing people together, and AJ and Drey are just the most recent example. Congratulations to the newlyweds, and feel free to post your pictures online anytime, wink wink, nudge nudge.