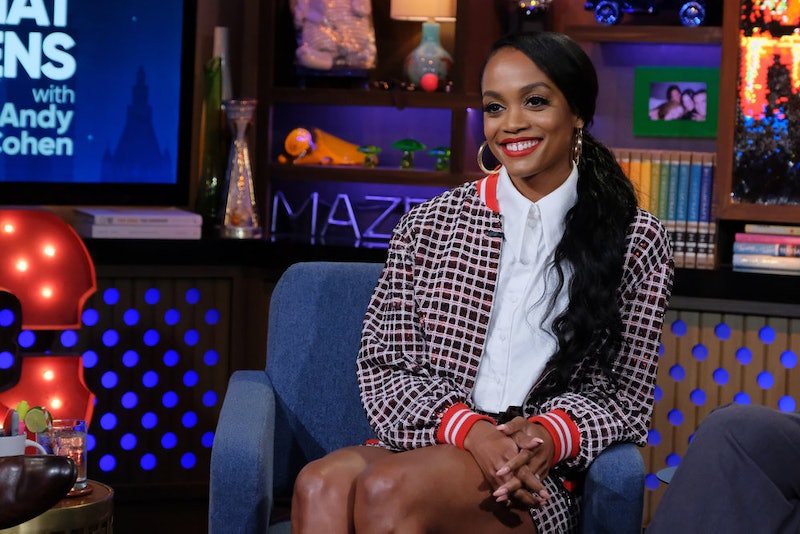 During an Oct. 3 appearance on Watch What Happens Live With Andy Cohen, former Bachelorette Rachel Lindsay said she and Raven Gates are not friends and they never will be again. (Bustle has reached out to Rachel and Raven's reps for comment, but has not yet received a response). A fan called in to ask Rachel, "What happened between you and your ex-friend Raven?" Before she could answer, Andy Cohen mentioned, "Number one question for you. We got this so much." Then he asked her, "What did she do to cause your falling out?"

Rachel replied, "I can't say. I promised I wouldn't say, but it was enough for me to not want to be friends with her anymore." In response, Andy asked, "And you're still not friends with her?" This prompted Rachel to share, "Not, not at all and I never will be." The WWHL appearance wasn't the first time Rachel addressed the end of her friendship with Raven. During a Sept. 11 appearance on The Morning Toast, host Claudia Oshry Soffer told the newlywed, "I just need to know why Raven wasn't at your wedding." Rachel married Bryan Abasolo, the final rose recipient from her Bachelorette season, on Aug. 24 in Cancun, Mexico.

Rachel's answer was very similar to what she told Andy on WWHL. She said, "This is what I will say: Raven and I are not friends and I promised I wouldn't talk about it." She added, "All I'll say is she knows what she did. You can ask her. Maybe you'll have her on [the show] and she can talk about it."

Rachel ended the conversation by saying, "I'm not gonna go to Twitter and say 'fickle and fleeting' again. I'm just gonna be quiet." She was referring to a 2017 tweet in which she wrote, "These Bachelor friendships are fickle and fleeting...#loyalty," but never clarified who that was about. On The Morning Toast, Rachel declared, "I've matured over the years, so I'm not gonna say anything."

Fans have followed Rachel and Raven's friendship since they met during Nick Viall's season of The Bachelor, which aired in 2017. When Rachel didn't receive a rose, she slipped Raven a note as she left the show. In a now-deleted tweet about the note, Raven described Rachel as "the greatest friend there is."

Before that, Rachel made it clear that she was #TeamRaven in a January 2017 tweet.

When Rachel was announced as the Bachelorette in February 2017, Raven congratulated her with a lengthy Instagram post. Raven even wrote that Rachel "IS friendship. And she IS LOVE. I am ALWAYS in your corner Rach!"

The two Bachelor Nation fan favorites soon lived in the same city: Dallas, Texas. Bryan moved in with Rachel shortly after their season concluded in 2017. In 2018, Raven relocated from Arkansas to live with Adam Gottschalk, who she met on Bachelor in Paradise Season 4 after he appeared on Rachel's Bachelorette season. In February 2019, Rachel and Bryan announced a move to Miami, Florida, Bryan's hometown.

While living in the same city is by no means a requirement for friendship, Raven was noticeably missing from some milestone events in Rachel's life. In August 2019, Rachel had her bachelorette party in Costa Rica with family and friends, which included some women she met from her time on The Bachelor. Alexis Waters, Astrid Loch, Whitney Fransway, and Kristina Schulman were all in attendance, but Raven was noticeably absent. The same group also attended the wedding in August, with Instagram users asking "Where's Raven?" in the comments section on photos.

Although Rachel and Raven are not currently friends, they seem to have shared many memories with each other and the Bachelor fans throughout the years.