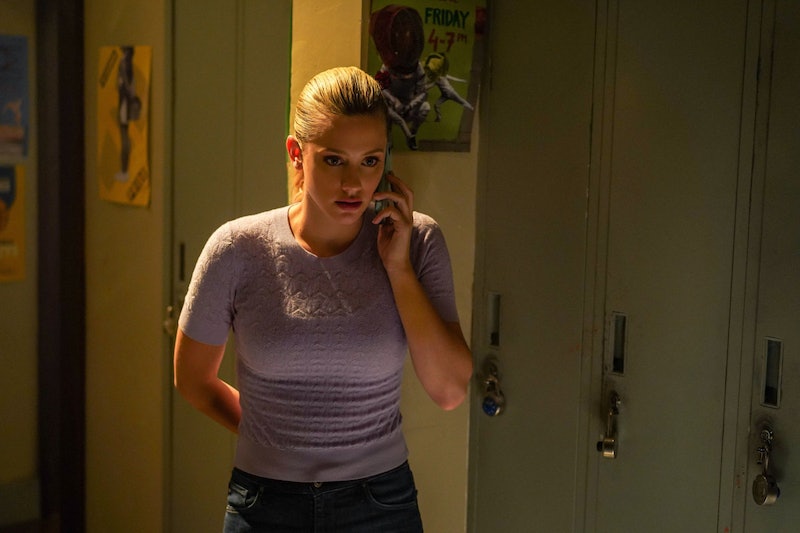 After the Gargoyle King turned out to be about six different people, a cult temporarily took over the town, and Archie got attacked by a bear, we could all use a recap of Riverdale Season 3 before the show returns. The finale dropped about five big reveals alone, so you may need a refresher just to try and make sense of it all. And there will definitely be some continuing threads in Season 4 you'll want to make sure you remember.

Season 3 took place primarily during Archie, Veronica, Betty, and Jughead's Junior year of high school. Between gang wars, cult rituals, and musical rehearsals, they actually went to prom and took the SATs. Archie started the year off in juvenile detention after being framed for a murder he didn't commit, then got roped into an illegal fight club during his stay there. Back in Riverdale, Veronica opened up a speakeasy below Pop's Diner while Betty and Jughead got to work investigating the Farm.

When Season 4 picks up, it will focus on Fred's death, which was written into the show after star Luke Perry died unexpectedly in March. Riverdale was still filming at the time, but as showrunner Roberto Aguirre-Sacasa told TVLine, they chose to wait to address Perry's absence until they'd had time to think about the right ending for Fred.

By the second episode, though, Riverdale should be back to its usual mystery-building. Here's what you need to remember heading in.

Children and adults alike became obsessed with a role-playing game called "Griffins & Gargoyles" in Season 3. It was played like Dungeons & Dragons, but had Jumanji-like consequences. The game was developed by the Sisters of Quiet Mercy as a twisted disciplinarian method, and used a drug called "fizzle rocks" to alter the minds of the players. In service of a costumed villain called "The Gargoyle King" who demanded sacrifice, playing G&G resulted in multiple suicides and homicides around town.

The Gargoyle King's identity remained a mystery for the entire season. Riverdale loves a red herring, and teased that the King was Tall Boy, Hiram Lodge, and even Jason Blossom at various points before ultimately revealing Penelope Blossom was the mastermind of the game, and Chic Cooper (who'd been presumed dead) was in the costume.

The Farm Did Some Major Recruiting

As if G&G wasn't enough of a problem for Teen Detective Betty Cooper, her mother joined The Farm — the cult where her sister fled in Season 2. Chad Michael Murray played Edgar Evernever, the Farm's enigmatic leader, who made his debut midway through the season after his followers had already sucked in most of the town. The recruitment process was largely helmed by Edgar's wife Evelyn, who posed as a student. At some point in the season, Cheryl, Toni, Fangs, and Kevin all joined The Farm, which caused some rifts in their friendships and romantic relationships.

Eventually, Betty discovered that The Farm was performing surgery on its members and harvesting their organs. They also robbed graves in order to convince members that they were communicating with their dead loved ones. In the finale, Cheryl found her brother Jason's body and brought it home with her.

Alice Was An FBI Mole

The only bright side to the creepy Farm storyline is that Alice was not, in fact, a true believer. She was an FBI mole working alongside her long-lost son Charles Smith to uncover the Farm's organ harvesting operation. Betty and Jughead's real half-brother turned up in the finale, played by actor Wyatt Nash. For those keeping track: we've already had one character on Riverdale pretend to be Alice and FP's son (Chic) and one pretend to be an FBI agent (Arthur Adams) but this is the real deal on both accounts.

That said, at the end of the season, Alice fled with the Farm to try and save Polly. Her whereabouts and safety are unknown going into Season 4.

Desperate for answers about the Farm and G&G, Betty started visiting Hal in prison, even though their relationship encourages Betty's dark side. Later in the season, he escaped when the vehicle transferring him got into a car crash. Hal re-assumed his role as the Black Hood and re-joined his former lover Penelope Blossom (aka the Gargoyle King). However, in the Season 3 finale, Betty shot her father as part of a "quest," and Penelope finished him off.

The Lodge Family Tension Heated Up

While Veronica was busy running an underground club and casino, Veronica's parents continued to spread their influence in town while feuding with each other. Hiram had both the juvenile detention center and the Sisters of Quiet Mercy working for him, and used the G&G obsession to his advantage. Hermione's tenure as mayor of Riverdale was unfortunately short-lived. She went behind her husband's back, did not approve of his plan to buy the town, and at the end of the season, Hiram had Hermione arrested for his attempted murder.

In the final moments of Season 3, a flash-forward teased that the summer after senior year, Betty, Veronica, and Archie will gather in the woods, covered in blood, and promise to go their separate ways to avoid getting caught for... something. We don't know what they did or didn't do. We don't know where Jughead is either, but as the group is burning his beloved beanie, it doesn't look good.

The Gargoyle King may be unmasked and the Farm seemingly gone for good, but there's no way that Betty, Jughead, Archie and Veronica are going to have a calm senior year free of murder and mayhem — fans didn't need a flash-forward to know that. It's only a matter of time before a new Big Bad emerges.