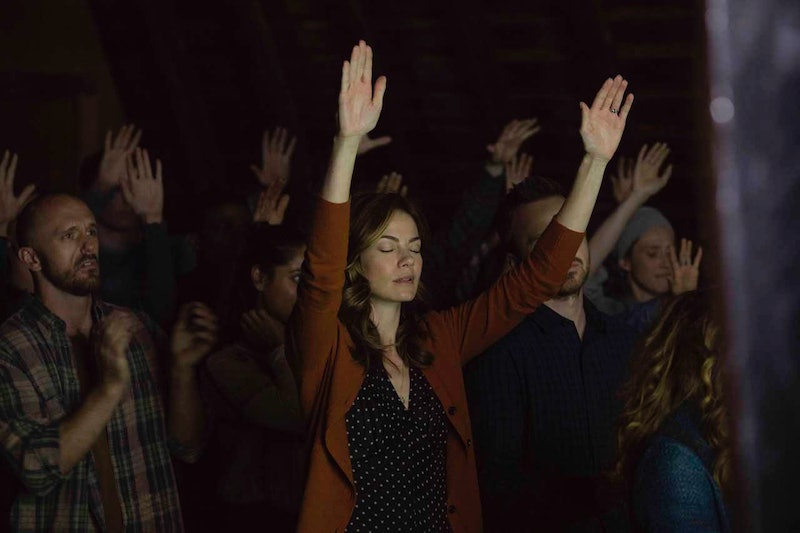 Hulu is known for its extensive library of television programs from other networks, but its growing assortment of original programming is nothing to sneeze at either. Case in point: Hulu's cult drama The Path is returning for a second season. Part psychological-thriller and part domestic drama, The Path has caved out its own unique space within Hulu's lineup, offering a unique and complex story to viewers. With the show making its Season 2 return to Hulu on Jan. 25, now is the perfect time to catch up with this recap of Season 1 of The Path.

Those who are already familiar with the show will surely recognize that The Path is a cult drama in more than one way. The show has a smaller, yet still very devoted following compared to other major streaming dramas like House of Cards or Transparent, but is also literally a drama about a cult (or as they say in The Path, "a movement"). The show follows different members of the fictional Meyerist Movement as their faith in their religion, and each other, is challenged and called into question. By the end of Season 1, it looked like it may have been the beginning of the end of Meyerism.

The story of The Path kicks off when Meyerist Movement member Eddie (Aaron Paul) goes on a religious retreat to Peru, only to discover the supposed true leader of the Meyerists, Dr. Stephen Meyer, lying unconscious in a coma having not written down the final supposed steps to salvation. Eddie starts to question his faith in the Movement, creating strain between him and his wife Sarah (Michelle Monaghan). This strain is further challenged by Cal (Hugh Dancy), the new ambitious leader of Eddie's and Sarah's Meyerist community.

Soon after returning from Peru, Eddie is suspected of having an affair. In reality, he's meeting with a former member of the Meyerists, Alison, who believes that Meyerism is a lie and that the Meyerists are responsible for murdering her husband. From the show's pilot, it would be safe to assume that the show would progress to Eddie having a continued crisis of faith, would debunk Meyerism, and save everyone from their manipulative cult leader. However, The Path takes a much more surprising turn over the course of Season 1 and forces Eddie to ask himself a rather chilling question — What if the Meyerists are right?

Over the course of Season 1, Eddie and Sarah's entire lives fall apart. Eddie's crisis of faith and Sarah's suspicions of infidelity lead to their marriage falling apart, and the two get the Meyerist equivalent of a divorce. Eddie's crisis of faith not only pushes him away from his family, but eventually pushes him out of the Meyerist community that he's built his life around. In the real world, Eddie has a series of visions that imply that there may have been more to Meyerism than he suspected.

The rift between Sarah and her husband pushes her closer to Cal, and sets her up in a position to be working directly with Cal in the cult's leadership. Despite Sarah's near un-wavering faith in the Movement, the first season ends with Sarah having to confront a major challenge to her faith — she discovers that recently discovered "final steps" to enlightenment weren't actually discovered at all — they were written by Cal.

Cal's ascension to the top of Meyerism involves him taking some very drastic steps that are bound to have major consequences in Season 2. Not only is Cal's fabrication of the supposed final steps of Meyerism a huge breach of trust to his entire following, but his rise to power has forced him to silence some of his detractors. Sometimes this is as easy as Alison, the former Meyerist who sought to bring the cult down, choosing on her own to come back to the movement after discovering that her husband wasn't actually murdered but died trying to find enlightenment. Other times, however, it involves murder, specifically murdering a Meyerist higher-up from Peru who thinks that Cal is too powerful for his own good.

While Season 1 started with Eddie and Sarah's life falling apart, it looks like Season 2 could be the fall of Cal. At the end of Season 1, Sarah was suspicious of Cal and was pulling at the thread of Cal's missing murder victim. Eddie returned to Peru to discover that Dr. Stephen Meyer may actually be alive and well — assuming Meyer's recovery isn't another of Eddie's hallucinations. This possible clash between Dr. Stephen Meyer and Cal could be a major game-changer for Meyerism when Season 2 of The Path comes around, and the playing field is set for a major battle of ideologies between Eddie and Sarah as they find themselves in opposite positions then they started in.