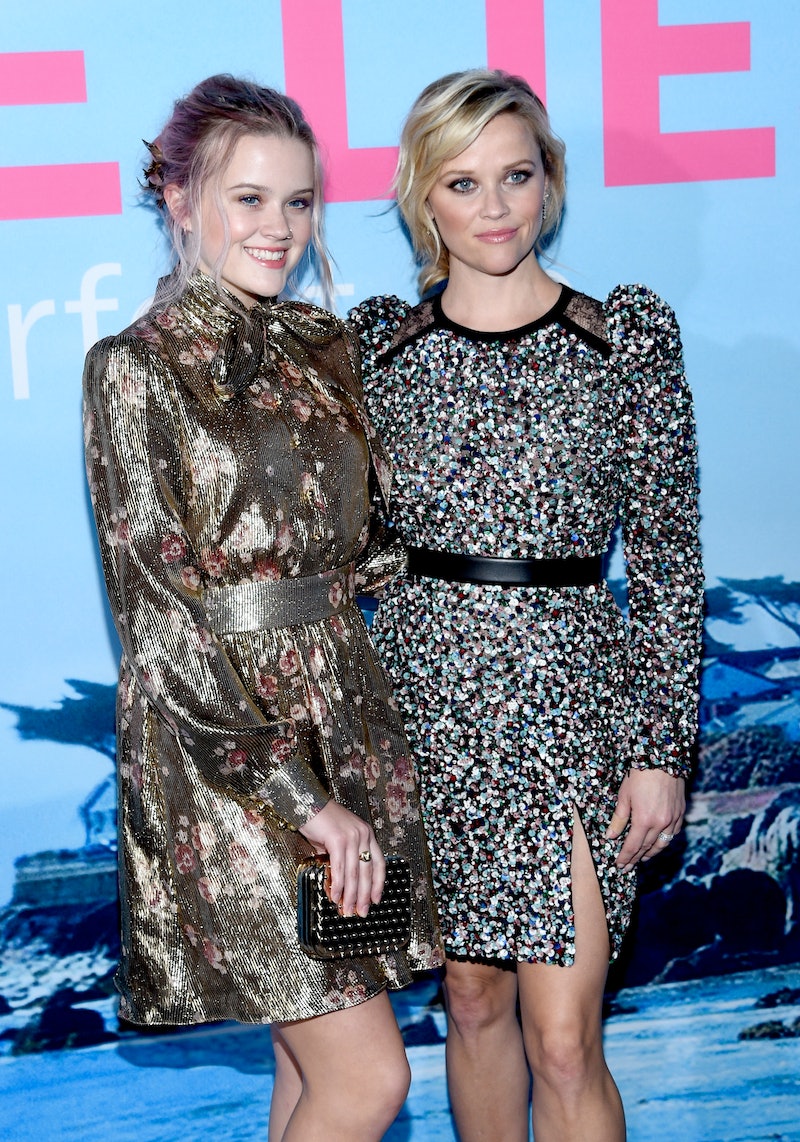 As you've undoubtedly heard before — Oscar-winning actor Reese Witherspoon looks almost identical to her daughter, Ava Phillippe. But beyond looking similar, Witherspoon and her daughter also seem to share an outlook on making the world a better place. Proving this point, Witherspoon posted an adorable #PuberMe throwback photo of herself to help raise money for hurricane victims in Puerto Rico on Friday. In the picture, Witherspoon looks so much like her daughter, it's practically uncanny.

For those of you not familiar with the #PuberMe campaign, it all started when The League star Nick Kroll made an appearance on The Late Show with Stephen Colbert this past Wednesday to promote his new show, Big Mouth. "There's catharsis in showing who we were and what we became," Kroll said when sharing a photo of himself before he became famous. He encouraged fellow celebrities to share their own awkward photos.

Things got taken up a notch when Colbert not only shared his own photo, but offered to make a donation to his AmeriCone Dream Ice Cream Fund for Puerto Rico hurricane relief for every celebrity who shared their own #PuberMe photo. Kroll offered to match Colbert's contributions, and the Twitter campaign quickly spread with dozens of celebs, ranging from Ryan Seacrest to Amy Schumer, sharing awkward photos to raise money for Puerto Rico.

"Here you go," Witherspoon captioned her #PuberMe pic, "giant glasses, awkward hands, feeling 14! All for a good cause. God Bless Puerto Rico." Indeed, it is for a great cause. Nearly the entire country of Puerto Rico is without power, and according to NBC News, almost half of the population currently does not have access to potable water.

During an appearance on CNN on Friday, Sept. 29, San Juan Mayor Carmen Yulín Cruz urged the federal government to do more to help the people of Puerto Rico. "We're dying here," Cruz told Anderson Cooper. "We truly are dying here. I keep saying it: SOS. If anyone can hear us; if Mr. Trump an hear us, let's just get it over with and get the ball rolling."

With the government seemingly slow to respond initially (though President Trump has since sent first responders and waived the Jones Act that was hindering relief, according to the New York Times), it's great to see so many celebrities doing what they can to help the people of Puerto Rico. Beyond sharing pictures and urging their followers to make donations, various stars have made sizable donations of their own. Jennifer Lopez, who had relatives missing in Puerto Rico that were recently found, made a $1 million donation to organizations providing relief to Puerto Rico. Other stars like Ricky Martin (who is of Puerto-Rican descent), Beyoncé, and Ellen DeGeneres have also been actively raising funds and awareness.

In addition to raising money for a good cause, Witherspoon's adorably awkward photo is also another reminder of how much the Legally Blonde actor looks like her daughter with former husband Ryan Phillippe.

Seriously, don't they look like twins? Especially when you compare Witherspoon's daughter to what the star looked like when she was a teenager. Phillippe, who is 18, also seems to have inherited her mother's passion for doing good. After Witherspoon's big win at the Emmys for her HBO series Big Little Lies, Phillippe shared a photo to Instagram with a caption highlighting the effort Witherspoon puts into creating opportunities for women in Hollywood. She wrote,

"I am so proud of how hard my mama has worked to showcase the stories and talents of strong women like herself, and I am so happy she's been officially recognized for it."

So not only do Witherspoon and Phillippe look like twins, but Phillippe seems to share her mother's passion for important topics like gender equality. Even if you're not a star, you too can follow Witherspoon's lead by sharing a #PuberMe photo to raise awareness of Puerto Rico among your own friends and family. You can also make a donation to an organization providing relief to the country.