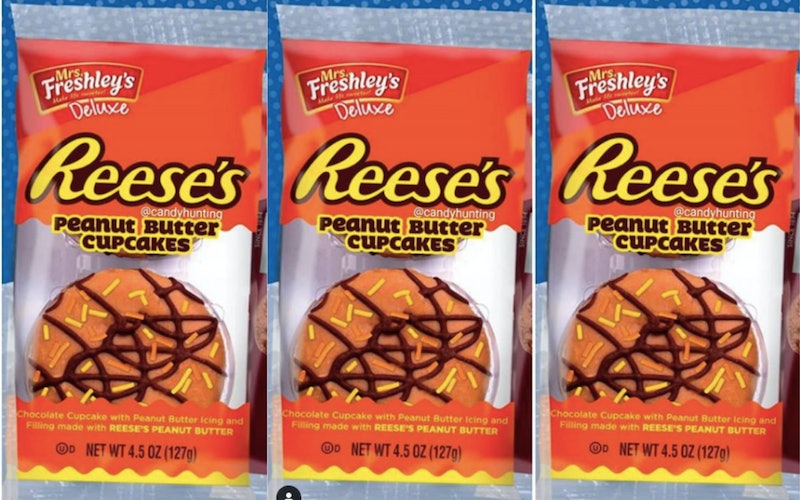 The humble Reese's has reinvented itself so many times in our modern day of snack that it puts Taylor Swift's era strategies to shame. The next thing on the horizon for our most beloved peanut butter snack? The Reese's Peanut Butter Cupcake from Mrs. Freshley's. Per the packaging, it's a "chocolate cupcake with peanut butter icing and filling made with Reese's peanut butter." Per my mouth, it needs to get into my stomach, fast.

The release date of the cupcakes isn't yet known, but what few details we have are promising — the upcoming snack was first brought to the internet's attention by food Instagrammer @candyhunting in September, and then confirmed at the at the 2019 National Association of Convenience Stores (NACS) annual trade show, which is being held in Atlanta from Oct. 1 through Oct. 4. While it didn't come with a release date, Bustle reached out to Hershey's, and a spokesperson confirmed that they will be available at "various national retailers." Based on a the release dates of a lot of other mashups announced at the conference — which include Froot Loops-flavored Pop-Tarts, Fanta Snack Packs, and various Oreo creations — it may be safe to assume that we're going to see these arrive on shelves in 2020.

This is far from the first time we've had a cake innovation in Reese's land. In May of this year, a ginormous Reese's ice cream cake was selling for $15.99 across the U.S., in locations like ShopRite, Publix, Giant Landover, Giant Martin's and Food Lion. This, of course, was immediately outshined in the public eye by the massive Cold Stone Reese's Peanut Butter Ice Cream Cups that arrived in May shortly after. Per Cold Stone, they were made with chocolate ice cream and layers of Reese’s peanut butter sauce, which was held together by a chocolate cup, then topped with sea salt, fudge ganache, and a piece of a Reese's. Because the Reese's never quits when it come to the cake game, it then tirelessly turned right around and turned itself into a doughnut for kicks. The Krispy Kreme Reese's Lovers Original Filled Doughnuts hit the scene in August, offering not one, but two different Reese's-inspired doughnuts, both of which were filled with Reese's Peanut Butter Kreme.

So really, it was only a matter of time before Reese's lent its chocolatey body to cupcakes as well. Hopefully Reese's Peanut Butter Cupcake from Mrs. Freshley's will be hitting shelves sooner rather than later — in the meantime, you've got plenty of Reese's Halloween candy to tide you over (because the pumpkin-shaped ones are indisputably more delicious than any of the others, per peanut butter science and law).

More like this
Starbucks Released New Menu Items For The Summer
By Emma Garza
A Beginner's Guide To Drinking Whiskey
By Alexis Morillo
How To Make The Watermelon, Feta, & Mint Salad Trending On TikTok
By Emma Garza
How to Delete (or Pause) Your Hinge Account
By Emma Carey
Get Even More From Bustle — Sign Up For The Newsletter