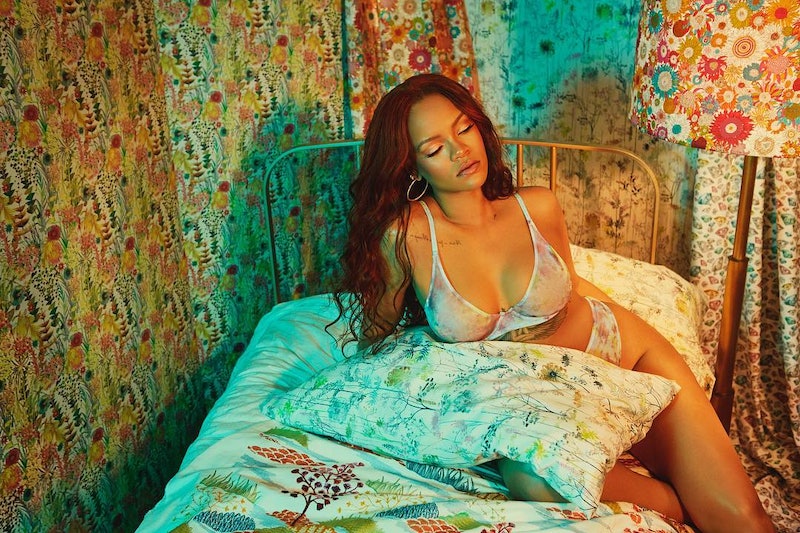 Rihanna is a busy woman, but she's not slowing down any time soon. Between Fenty Beauty, her luxury fashion label, and her lingerie brand, you'd think she'd need a second to breathe. But this is Rihanna we're talking about. The star's new Savage x Fenty tie-dye print is dropping with her August releases, and it proves that the beauty and fashion mogul totally has her eye on trends.

If you're a fan of Savage x Fenty, you likely already know that the brand drops new releases fairly frequently, typically with the seasons. Sometimes, though, the launches are mixes of existing prints and styles done in new ways. Savage's August drop, however, features an entirely new print in what else but tie-dye. In a perfect move, it's named the Groovy print.

The new colorful option will be available in the existing Glissenette styles from the brand, and on top of being totally on trend thanks to the print, the new pieces also feature rose gold hardware. Basically, it's perfect.

While the new Savage x Fenty tie-dye print is one of the most notable parts of the new drop, it's not the only thing that's coming fans' way. The launch is also set to include two new crotchless panties in a leopard lace print as well as a new VIP box for those who are part of the Xtra VIP program.

If you haven't heard of Rihanna's Savage VIP program, you're missing out on some serious exclusives and first chances at new products — including the new tie-dye print. The Xtra VIP boxes from Savage x Fenty retail for $49.95 per month, but they're a ton of bang for your buck. Each month fans of the brand receive a box curated by Rihanna herself, and they typically include a full set from Savage and a few accessories from the star.

Given that Rihanna is launching an all new print in her August line-up, of course it's the set that's been chosen for the month's Xtra VIP box alongside an exclusive crop and air freshener (which hopefully smells like Rihanna herself).

If, however, you aren't an Xtra VIP member, the new tie-dye print is set to drop at midnight on August 1. You may want to grab some coffee later in the afternoon to stay away for the launch.

As for cost, the price is directly in line with Savage's existing range. Pieces from the new August drop, including the tie-dye items, will retail for between $16.50 and $56. Like the price, nothing has changed with the size range, either. The new pieces will be offered in sizes XS-3X and 32A-46DDD.

If you want to get in on the new Savage x Fenty tie-dye print or any of the other new drops from Rihanna's lingerie brand, grab your coffee, credit card, and internet browser. The new sets and patterns will drop at midnight on August 1, and you don't want to miss this mashup of the hottest print of the summer and the hottest lingerie brand on the internet.

This article was originally published on July 31, 2019