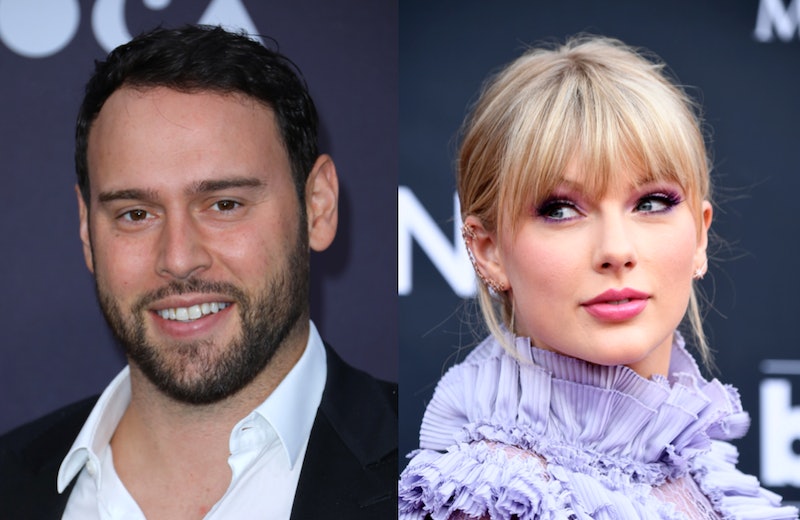 Forget making official statements; the new way to address major controversies is via Instagram memes, according to this famous manager. On Tuesday, July 16, Scooter Braun's Instagram may have addressed the Taylor Swift situation with a jokey caption under a post manipulated with the Face App, joking that the past few weeks had "taken a toll."

The manager appeared to touch on the controversy surrounding the singer's reaction to Braun's company purchasing her masters from Big Machine Records with his recent Insta post. Bustle reached out to Braun to see if the post was meant to address the Taylor Swift situation, but had not heard back at the time of publication.

Using the Face App — in which users can digitally age themselves with often hilarious results — Braun hopped on the trend of sharing the results with all of his followers. "Last couple of weeks have really taken a toll on me 😁," Braun captioned the snap. Though he didn't mention Swift directly, many fans in the comments definitely interpreted the post as response to the singer.

On June 30, it was announced that Braun and his company, Ithaca Holdings LLC, had acquired Big Machine Records from Scott Borchetta, and that buy purchasing the label, Braun had also acquired the master recordings to Swift's first six records, which she made while signed to Big Machine. (The singer signed to Republic Records and Universal Music Group in November 2018.) In response to the news, Swift wrote a post on Tumblr that accused Braun of bullying her throughout her career, describing the deal as "my worst case scenario."

"Some fun facts about today’s news: I learned about Scooter Braun’s purchase of my masters as it was announced to the world," Swift wrote at the time. "All I could think about was the incessant, manipulative bullying I’ve received at his hands for years." At the top of her post, Swift included a screenshot of an Instagram Justin Bieber posted on Aug. 2, 2016, of what appeared to be a FaceTime conversation between Braun, Kanye West, and Bieber. The "Sorry" singer posted the photo shortly after the whole Swift-Kardashian-West drama that involved Kardashian sharing a recording of a conversation between Swift and West, where she seemed to approve of the rapper's mention of her in his song "Famous."

Swift's Tumblr post about her masters continued, "when I left my masters in Scott’s hands, I made peace with the fact that eventually he would sell them. Never in my worst nightmares did I imagine the buyer would be Scooter." She also wrote that Borchetta was aware of her dislike of Braun, explaining that, "any time Scott Borchetta has heard the words ‘Scooter Braun’ escape my lips, it was when I was either crying or trying not to."

While Braun hasn't officially responded to Swift's Tumblr post, Bieber soon posted a defense of his manager on Instagram and apologized for the post he made in 2016. "Hey Taylor. First of all i would like to apologize for posting that hurtful instagram post, at the time i thought it was funny but looking back it was distasteful and insensitive," Bieber wrote, later adding, "Scooter has had your back since the days you graciously let me open up for you." Braun's wife, Yael, also defended him in a lengthy Instagram post, where she wrote that "Scott (Scooter) was excited to work and build with you." In response to Bieber and Yael's posts, several of Swift's friends and fellow pop stars shared their own support of the "ME!" singer and her quest to own her masters.

While Swift didn't make any further comments on the situation, many fans believe that the singer made her feelings about Braun known during her performance of "Shake It Off" at the Amazon Prime Day concert. While singing the bridge of the song — which featured the lyric, "Just think, while you've been getting down and out about the liars and the dirty, dirty cheats in the world" — she put extra emphasis on "liars and the dirty, dirty cheats," which fans felt was a call out to Braun.

Now, with his Instagram post, fans are convinced that Braun may have taken a page out of Swift's book and responded indirectly to the controversy. It could, of course, just be another example of a man enjoying the most recent Internet obsession. And whether this back and forth will continue remains to be seen.