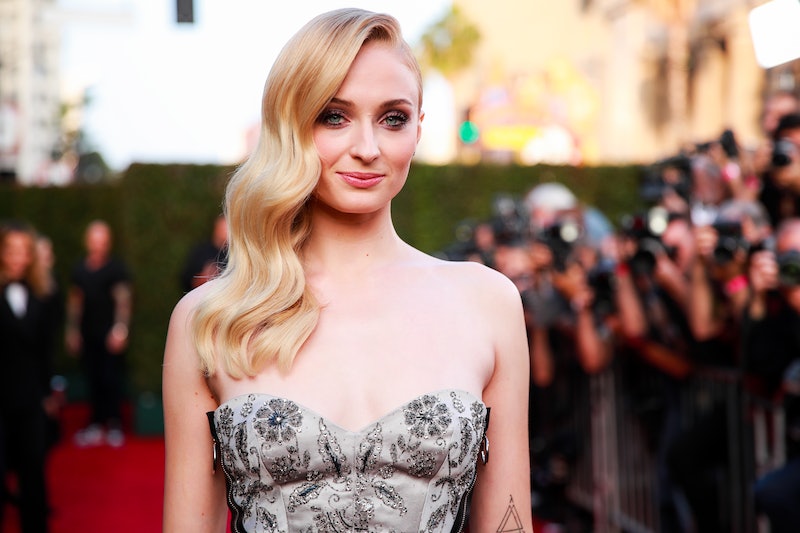 Some other high-profile challengers have provided the newlywed with ample competition. Kendall Jenner kicked off her cap via jet ski. Hailey Baldwin opted for a dirt bike. Mariah Carey sang until her bottle cap combusted from its bottle, while Lizzo realistically failed to complete the challenging feat. But all of the other celebs can go home, because Turner's creative interpretation of the assignment was the best yet.

On Friday, July 12, the Game of Thrones actor took to her Instagram Stories to weigh in on the parlor trick that has been sweeping the Internet recently. In the video, captured while Turner was on an airplane, she simply reached over to unscrew the top of her red wine before deadpanning, "Stop this now." Is it just us or can new husband Joe Jonas be heard chuckling from behind the camera? Turner captioned the video, "I look terrible but someone's gotta do it," alongside the shrugging emoji. But in the corner, one can read, "And that's the tea," referencing her hot take.

Of course, this isn't the first time Turner has spilled copious amounts of herbal brew. It is her trademark, after all. Just last week, Turner took a moment from her honeymoon to speak on behalf of U.S. women's soccer player Alex Morgan. Prior to her World Cup victory, Morgan faced criticism for sipping tea after scoring during a game, which was an homage to Turner, some speculated. So, shortly after Turner married Jonas in France, she delivered this legendary speech on Morgan's behalf:

"Unfortunately the UK women's football team lost at the World Cup. And of course I'm incredibly sad and incredibly proud of that team, but I am so honored that we lost to such and incredible team, the U.S. women’s football team. Alex Morgan, all the haters saying that this is disrespectful, I'm honored that you thought of me. I'm really f*cking proud of you, Alex Morgan. Congratulations on your win. And that's the motherf*cking tea." *cue ginormous gulp from her wine glass*

Plus, who could forget Turner downing a glass of wine during a March hockey game? It was one of the first times the world became aware that the Dark Phoenix star planned on delivering moments that would live on in pop culture forever. So, it kind of makes sense that she's bring something completely unprecedented to the bottle cap challenge. One can only imagine the actor living it up on her honeymoon while the rest of humanity spent their time doing...this. Come to think of it, why is the bottle cap challenge even a thing? Turner is seriously making us reevaluate it all, per usual.

Class, if there's one thing we learned here today, it's that Turner often speaks truth that involves sipping vino.

More like this
Prince Harry Incorrectly Recites Christina Aguilera’s “Genie In A Bottle” Lyrics
By Jake Viswanath
15 Photos Of 'The Last Of Us' Star Pedro Pascal That Cement His Zaddy Status
By Radhika Menon
'GoT' Star Emilia Clarke Says She "Just Can't" Watch 'House Of The Dragon'
By Brad Witter
30 Of Kendall Jenner’s Best Runway Looks To Date
By Dominique Norman
Get Even More From Bustle — Sign Up For The Newsletter
From hair trends to relationship advice, our daily newsletter has everything you need to sound like a person who’s on TikTok, even if you aren’t.