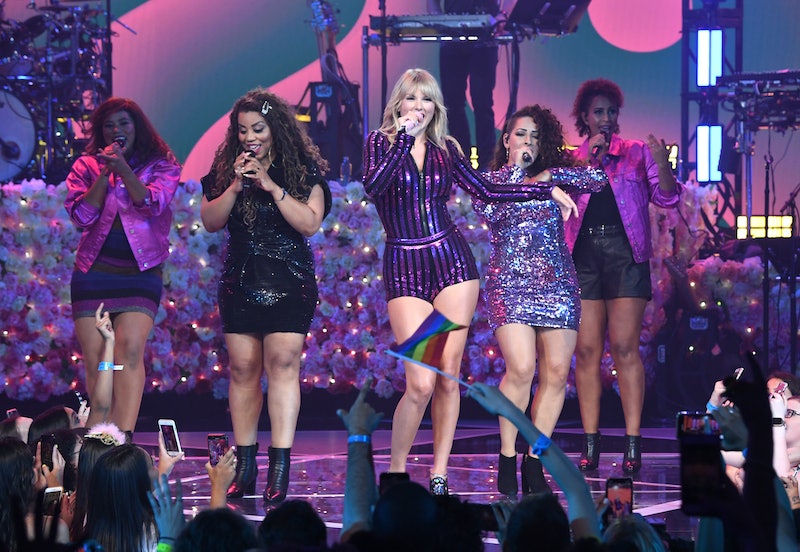 In news that will make fans do the exact opposite of remaining chill, Taylor Swift performed "You Need To Calm Down" for the very first time at Amazon Music's Prime Day Concert in New York City on Wednesday, July 10. Not only that, but she also gave hints about what to expect from her new album Lover when it drops on Friday, Aug. 23. The performance's overall theme of speaking her mind and not letting anyone dull her shine was a pretty good indicator of what's ahead.

At the concert, which is streamable now on Prime Video, Swift took the stage after a girl power-heavy line-up filled with talented female artists — Dua Lipa, Becky G, and SZA. As Swift called them herself, these "absolute bosses" shared a range of new and old favorites. For instance, Dua Lipa performed "New Rules," while Becky G debuted her song "Dollar," and SZA took things back to the '90s with a cover of "Kiss Me" by Sixpence None The Richer. (And that's just the short list.)

Similarly, Swift's sparkly Prime Day set included plenty of throwbacks mixed with her latest tracks, "ME!" and "You Need To Calm Down." The singer played everything from "Love Story" to "Style" to "Shake It Off." And in between, she shared how excited she is about this next chapter.

In what may not be a huge surprise, the theme of Swift's new album is all about love. She told the crowd,

"It's really sort of a love letter to love itself. And I think that love is such an inspiring thing to write about, especially for us songwriters, because love is so many things. Love is complexity, love is struggle, love is pain, love is joy, love is hope, love is equality."

At that last line, the audience erupted in cheers before she dove right into singing "You Need To Calm Down." As fans know, Swift has used the track to spotlight the Equality Act, encouraging fans to sign a petition asking the Senate to support the bill that would protect the LGBTQ community from discrimination.

During her set, Swift also talked to the fans, who sang along to every single lyric, about how much writing her own music means to her. "One thing that has been really wonderfully consistent throughout the entire time that I've been making music is that I write all of it," she said. "And it's my favorite thing to write songs and then they go out into the world, and I'm really lucky that you guys are nice enough to then care about those words that I've written, sing the words back to me. It's legitimately the coolest feeling in the world."

Sure, there's been some very public drama lately (aka the whole Scooter Braun and Scott Borchetta situation), but Swift ultimately seems most focused on making music she and her fans enjoy. While fans think she *might've* shaded Braun with one particular "Shake It Off" lyric, the bigger takeaway is she's rising above it — sparkles, confetti, and all — so let's calm down, everyone.