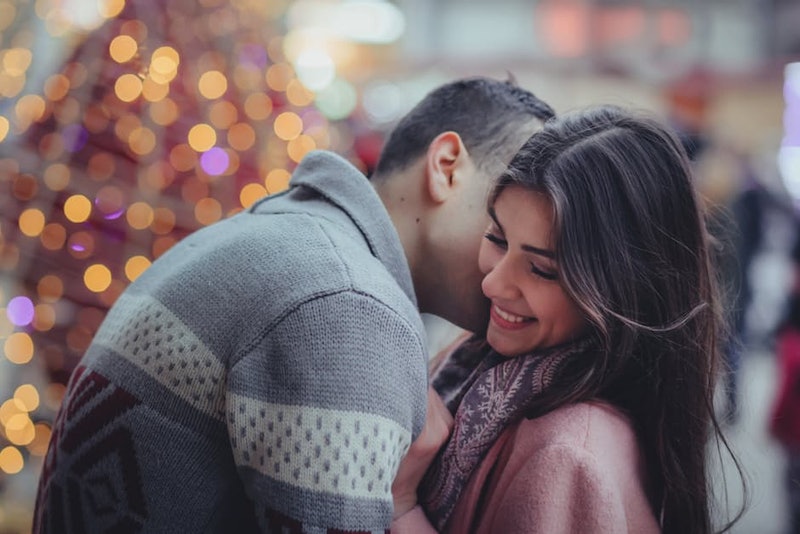 It's (finally) a brand new year, and with that comes a fresh start for all things relationship-y. If you're currently partnered up, or are simply in the mood to date, then I have good news. It seems 2017 could be your year for love.

I know, that sounds hopelessly romantic. And yet there are several goings on in the stars that could bring about happier, healthier relationships. "Nearly all year Jupiter (the planet of opportunity) is in Libra, the sign of marriage and relationships," author and astrologer Lisa Allen, MH, tells Bustle. "So overall, this will be a good year for romance, as well as serious partnerships." (Yay!)

This is also the case if you look to Chinese Astrology. As Allen tells me, 2017 will be much calmer than 2016. (It'll soon be the year of the Rooster, and no longer the year of the Monkey.) With these chiller energies floating around, it makes sense why there might be a positive shift in all our relationships.

Would you like to see what the stars have in store for you? If so, read on to check your zodiac sign for 2017 love predictions. Then get out there and have yourself a good time.

If you're looking to find a relationship, then this is your year, Allen tells me. There's even a chance you'll meet someone in the next few weeks. So if you do, go ahead and snatch them up. Just be sure your new partner is someone who can offer stability, while still giving you some space. If you truly want things to work out, that's the type of balance you'll need.

As a Pisces, you aren't always relationship-focused. And that's perfectly OK. But if you are on the lookout, it'll be super easy to find someone. Keep in mind, however, that the timing might not be right for anything serious, Allen tells me. "Commitment will be better [in 2018], but you can have fun during your discovery process." (Wink wink.)

You were way too busy in 2016 to even think about a relationship. But if you'd like that to change, it totally can in 2017. In fact, you may even be overwhelmed with the influx of possible partners — though most won't be a good match. If that seems to be the case, don't try to force anything. As Allen tells me, something good could come about in May. So do yourself a favor and wait.

If you want a relationship, the opportunity will definitely present itself this year — if you are willing to loosen up a little. " This does not mean compromising who you are — just make some wiggle room for changes as long as the changes are healthy and support you, rather than take away your energy from your projects," Allen explains. The right person will totally respect this.

While there will likely be several good partners coming your way, 2017 might not be your year for a serious relationship. So instead of settling down, go out and have some fun. Just be sure you're honest about your intentions with everyone you date. "Don't break any hearts," Allen says, especially since these people may come back into your life in the future.

If you've had a rough time of it lately, it makes sense why you don't want to "get back out there." And yet, finding a partner often means going outside your comfort zone. As Allen says, "You are a worthy catch, but no one will know it if you stay under the radar." So use the new year as inspiration to try a date or two — even if you're nervous. I promise it'll be totally worth it.

If you take a look around, you'll probably realize that you have many an opportunity on the dating scene. And yet, you may find yourself being kind of picky. When that happens, it's important to make sure you're being picky about the right things. (Not external image, or anything shallow like that.) Doing so will snag you a good match, and someone who likely shares all your principles.

As a Virgo, you are incredibly hardworking. If you want to shift some of that energy into finding a relationship, it'll be possible to do so towards the end of 2017. If, however, you'd rather focus on work and other projects, then it may be better to save yourself the trouble and skip dating 'til next year.

Jupiter — the planet of opportunity — is in your sign for most of 2017. So if you're in the mood for a new SO, this could be your year, Allen tells me. To prepare, make sure you are clear about what you want, and then stay focused on that. (Or, at the very least, be clear about what you don't want.) If you can stick to your guns, you'll have tons of luck with relationships come May.

Scorpios are super lucky in that they rarely have trouble attracting new partners. But this means they often find themselves attracting the wrong types of people. Sound familiar? Then make it your priority in 2017 to figure out what you actually want out of a relationship. The new year will bring some positive influences into your life, so it's a good idea to be ready when that happens.

Sagittarius folks love their freedom, and yet many of you are already in committed relationships, Allen tells me. That's because Saturn — also the planet of commitment — has been in your sign for a while. If things are working out, then keep doing your thing. But make sure you're taking the time for creativity and exploration. (Two things you crave.) If you do happen to be single, don't worry about it. You still have "plenty of time to find the right one that allows you to be yourself."

If you're single right now, you might that nagging feeling that something good is on the horizon, and yet things aren't quite right. As Allen says, "Some of you think that everything you do isn't 'sticking,' but that is because you are supposed to be clearing, not building. So go easy on yourself." Do you for a while, and the right person will likely come along later in the year.

Whatever your relationship status — single, dating, happily partnered up — it seems 2017 has lots in store for love.