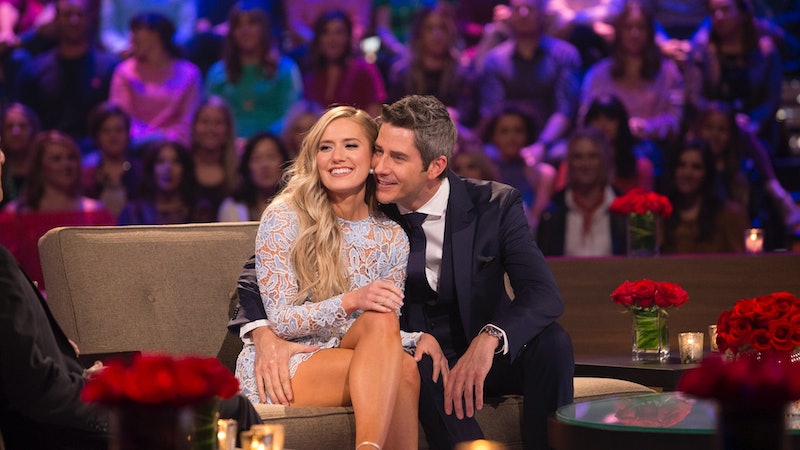 The Bachelor alums Arie Luyendyk Jr. and Lauren Burnham welcomed their first child on May 29, and now they have unveiled the significance of the name Alessi Ren. In a new interview with People, Arie and Lauren revealed the meaning of their baby’s name and how they ended up choosing it. So you can wonder no more, Bachelor Nation. The couple that almost wasn't has shared how the name sausage was made.

Lauren told the magazine that they decided they would call their baby Alessi late last year. She said she landed on the name Alessia while "looking online at girl names," “loved it,” and Arie suggested they shorten it to Alessi. “And we both knew that was it,” she said. If you bet money that Alessi’s middle name was inspired by Stimpy’s counterpart, I must say I dig your style. Oh, and I must also say that you did not win that bet. (Sorry.) Arie told People that the name Ren “is a nod to Lauren’s name.”

Lauren explained to the magazine that their daughter’s first “name means possessing a charming, easygoing nature, which endears her to others … a serious desire to understand heart and mind of everyone.” Additionally, multiple baby name websites, such as BabyNames.com, say it means “defender of the people.” According to those same sites, the name Ren means "lotus."

Last November, the couple announced they were expecting their first child. In a statement provided to Us Weekly, Lauren said,

"I kind of had a feeling that I might be pregnant. So my friend insisted on bringing a pregnancy test over. Arie came out with the test in his hand and tears in his eyes. He was like, ‘You’re pregnant!’”

The Bachelor couple kept the name under wraps until after the baby was born, but they did tell fans to expect something original. As Lauren teased in an interview with Entertainment Tonight in April, “It was a name we kind of tweaked into something unique. We don't really know anybody who's named that."

And then, the @babyluyendyk Instagram account dropped a big hint: There are five letters in the name. The caption for a post that went up on April 23 reads,

"My name is still a surprise and I’d love to keep it that way, if you know it keep your lips sealed and please don’t say. Well this has been fun for little ‘ol me! Until next week, with love, baby ______. "

That clue narrowed it down to, like, a billion possible names, but at least it was something to work with. For starters, we could rule out those "ideas" Chris Harrison offered up to Entertainment Tonight back in December. The Bachelor host's totally serious, not the least bit tongue-in-cheek suggestions that Arie and Lauren call their baby Christoper, Christina, or Harrison were off the table.

If you saw those five blank spaces in that IG post and guessed the baby's name is Alessi, whoa. Well done. A thousand points to Bacheloryndor.