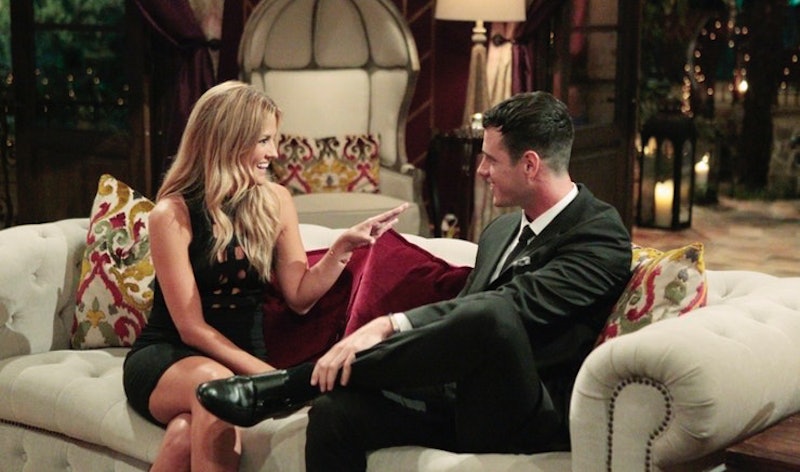 The moment is finally right, and I'm ready to say it: Ben Higgins and Becca Tilley should date. It's always a bummer when a Bachelor Nation couple breaks up, of course, as the Season 20 Bachelor and his former fiancée Lauren Bushnell did in May. But optimistic fans like myself can't help but notice that the stars seem to be aligned for a new relationship, this time between Ben and Becca. The pair first met on his season, which filmed in 2015, but Becca had her eye on the software salesman even before that. In fact, he was actually the reason that she returned to the franchise.

The chiropractic assistant was the runner-up on Chris Soules' season of The Bachelor, ultimately losing out to Whitney Bischoff. But she felt such a connection to Ben on Kaitlyn Bristowe's season of The Bachelorette that she decided to give love another go. And because she'd made her crush on the now-29-year old so public, even tweeting about it, producers seemed more than happy to facilitate. (And Ben even favorited the below tweet, so you know he was on board as well.)

Becca stepped out of the limo on night one of Season 20 to widespread excitement about her potential with Ben. But despite the similarities between the two, it wasn't the right moment for them. Even though the Bachelor star was impressed with Becca's dedication to remaining a virgin until marriage, he was too dazzled by Lauren to keep her around. He sent Becca home in Week 7, shared values and all, after she admitted she was upset by his obvious connection with Lauren.

So nothing strictly went wrong between the pair; he just wasn't able to give her his full attention, because he had committed it to someone else. Which makes this the perfect moment for an attempt at round two, now that both parties are single again. Ben ended his engagement to Lauren earlier this month, around the same time that Becca split from Robert Graham. The blond 28 year old had been dating the fellow Bachelor Nation alum since September 2016, only to find herself and Higgins abruptly single in the very same week. Coincidence... or fate?

I'm ready to say fate, because I can tell there's more between these two. When Ben posted a photo recently with a lengthy caption defending himself from critics, I couldn't help but notice that Becca posted a comment. The post called out "negative comments" and "indecently hateful words," and, in it, Ben pledged to focus on his spiritual wellbeing and relationship to Christ.

Below it, Becca added her own two cents, plus a couple of emoji hearts for good measure.

Oh, hello. It's also worth noting that Becca's comment came within the same hour that Ben made his initial post, so it's clear that she still keeps close tabs on his social media. Not to mention that she's obviously still very fond of him.

I'm no expert, but doesn't this seem like the perfect time to reunite this star-crossed couple? On Bachelor in Paradise, for example? Although both reality stars have done two shows within the franchise, neither has ventured onto the BIP beaches. I'd love to see them cross paths there to catch up on life, their shared faith, dating within Bachelor Nation, and the power of second chances. Just saying.