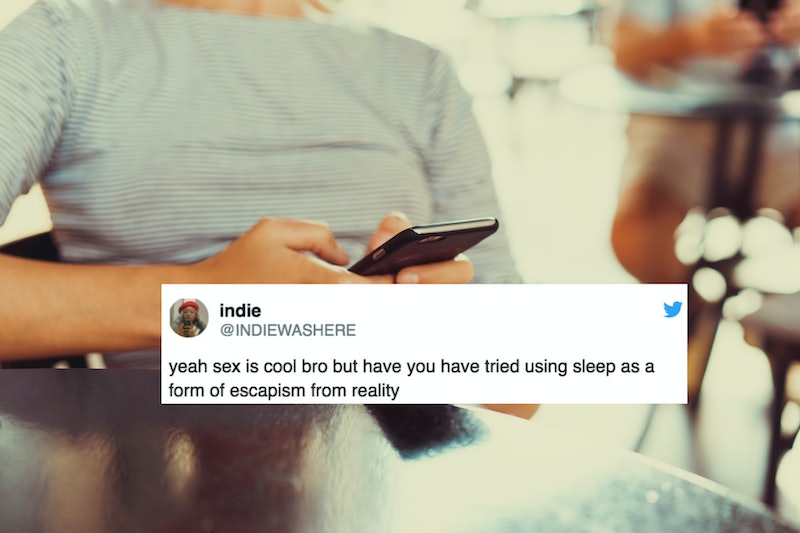 While there are a lot of things some of us could take or leave in 2017, it was, decidedly, a good year for memes. We kicked the year off with known internet hero Salt Bae. There was the glorious '90s nostalgia of the "floor is lava" meme. There was that GIF of an incredulous blinking man that I still don't have context for, and will be very upset if I ever do. These are just a few among many gems the internet birthed this year, but now, coming in just under the wire to join the ranks of Quality Memeing In 2017, is the "yeah, sex is cool" meme that has taken Twitter by storm.

The meme, interestingly enough, may have origins in ... garlic bread. (Seeing as I wouldn't be surprised to learn that garlic bread is the original source of all life on Earth, maybe this really does check out.) According to Know Your Meme, among the first "yeah, sex is cool" tweets came from rapper DMX in a 2015 tweet that read "YEAH SEX IS COOL BUT HAVE YOU EVER HAD GARLIC BREAD". That being said, popular Twitter account pakalu papito appears to have tweeted the same sentiment earlier that year (albeit without caps lock).

Alas, 2015 was not the time for the "sex is cool" meme to shine. It has stayed dormant just under the surface of all those dank, dank memes that have come and gone in the past few years. It waited through the mannequin challenge, the eclipse memes, and the Meryl Streep shouting meme. It slumbered through "oh no baby, what is you doing" and dark kermit. It woke just in time for us to kiss 2017 goodbye by finally copping to a truth so ancient that it resonates in all of our bones: there are approximately eight bajillion things that are cooler than sex.

Aw, yeah, all those pubic resources to the benefit of society really hit the *spot*.

Aka, when you meet the April Ludgate to your Ben Wyatt.

Dreams: the only place where Chris Evans is your husband and not 140 characters on your Twitter feed.

Raise your hand if you felt personally attacked by this tweet.

Honestly, I'm pretty sure I've been wearing this robe for three years.

I just got a little high thinking about this.

The Repeal Of Net Neutrality

Sex will always be there. Your ability to do something about net neutrality? Not so much.

So many prayer hands emojis that the rumors about a Vine 2.0 are more than that.

This tweeter misspelled "STOMPING THE LIVING DAYLIGHTS OUT OF," but other than that, 10/10 can relate.

To be fair, no one told you life was gonna be this way. Your job's a joke, you're broke, and now you've got this song stuck in your head for the rest of the day.

So, basically what happens whenever someone utters the words "Harry Potter" in a crowded room.

EVERYONE IS COMING OUT OF THEIR CAGES AND FEELING JUST FINE.

In any case, here lies sex, may it rest in peace. It used to be cool, but then 2017 canceled it and replaced it with a bunch of cooler things instead. Maybe come spring it will have the chance to rise again; in the meantime, let's all pour one out from the relative safety of our slankets and terrible holiday movie marathons and raise whatever's left in our glass to not making any more effort in the sex department in 2017.