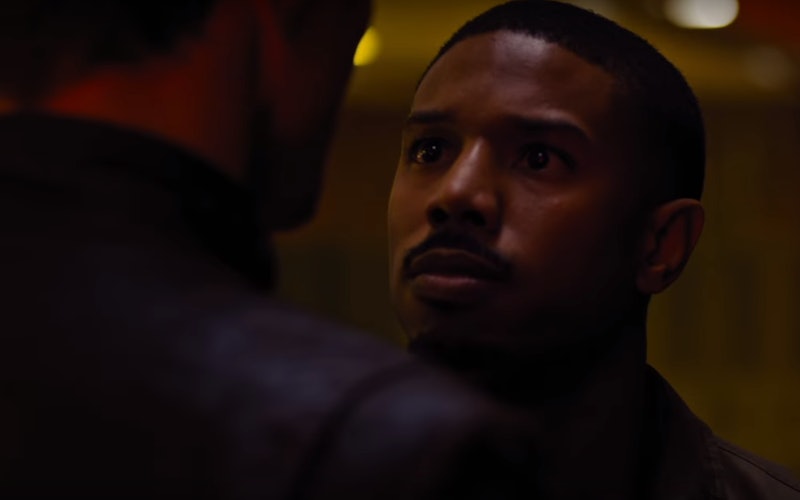 There's no shortage of fire in HBO's first trailer for Fahrenheit 451. The updated version of Ray Bradbury's classic novel looks as relevant as ever in the new footage of the film, and Michael B. Jordan appears to be the perfect anchor for the tale of oppression and censorship. Jordan stars as Guy Montag, a fireman in a dystopian future where the profession has become one about starting fires, instead of putting them out.

"In a future where the media is an opiate, history is rewritten and "firemen" burn books, Jordan plays Montag, a young fireman who struggles with his role as law enforcer. Battling his mentor, fire captain Beatty, played by [Michael] Shannon, he forsakes his world in an effort to regain his humanity."

In Guy's world, nothing is more dangerous than the written word, and it's his task to burn every book he can find. The goal appears to be to achieve equality — but as you can guess, there's something far more sinister going on. It seems that the fictional government hopes to create a world where the narrative of history is controlled by the people in power. As Guy's mentor, fire captain Beatty, says in the trailer, "We are not born equal, so we must be made equal by the fire."

Guy is torn between his work and a growing feeling that there's more going on than what his mentor is leading him to believe. Jordan does a wonderful job of conveying a sense that his character is beginning to question the society he lives in throughout the trailer. For every moment in which he seems committed to the cause, there's another where Guy is seen wandering the futuristic city streets clearly wondering if he's doing the right thing by participating in a system that sees knowledge as danger.

Fahrenheit 451 is set to premiere this May on HBO, and the TV movie is coming at a time when Jordan's career is red hot. The actor can currently be seen on the big screen in the box office smash, Black Panther, and he's set to reprise his role as Adonis Creed in Creed II later this year. Fahrenheit 451 is yet another role that appears to be perfect for showing off Jordan's range as an actor.

As a literary character, Guy doesn't always leap off the page — while he's the undisputed protagonist, it's Bradbury's chilling dystopian setting that truly captivates the audience. However, this modern update to the story appears to be focusing on fleshing out Guy and his journey from government puppet to enlightened hero. Even though the vast majority of the trailer is focused on showing just how committed Guy is to his role as a fireman, it's to Jordan's credit that the audience can sense there's more going on beneath the surface of this character.

Perhaps the eeriest parts of the trailer come from the ways in which some of the scenes echo current events. In Guy's world, both the news and facts are seen as every bit as dangerous as the piles of books the firemen burn. Meanwhile, the people seem to be lost in a virtual world, blissfully unaware of what is being taken from them. It's a haunting premise that isn't afraid to draw on current events to make this classic story even more haunting.

With May just a few months away, HBO will surely be releasing more footage from the film soon. Until then, this small preview of Fahrenheit 451 not only brings the heat, it also gives the world more of Jordan — and whether or not the movie lives up to its premise, more of Jordan is never a bad thing.

More like this
What Is Barack Obama’s Net Worth? He Makes *Way* More Now As An Ex-President
By Hugh McIntyre
Laura Dern Said “Cultural Awareness” Made Her Rethink This 'Jurassic Park' Fact
By Grace Wehniainen
The 'Hocus Pocus' Sequel Finally Has A Release Date & It Makes Total Sense
By Shannon Barbour and Radhika Menon
What Does Doctor Strange’s Third Eye Mean?
By Arya Roshanian
Get Even More From Bustle — Sign Up For The Newsletter