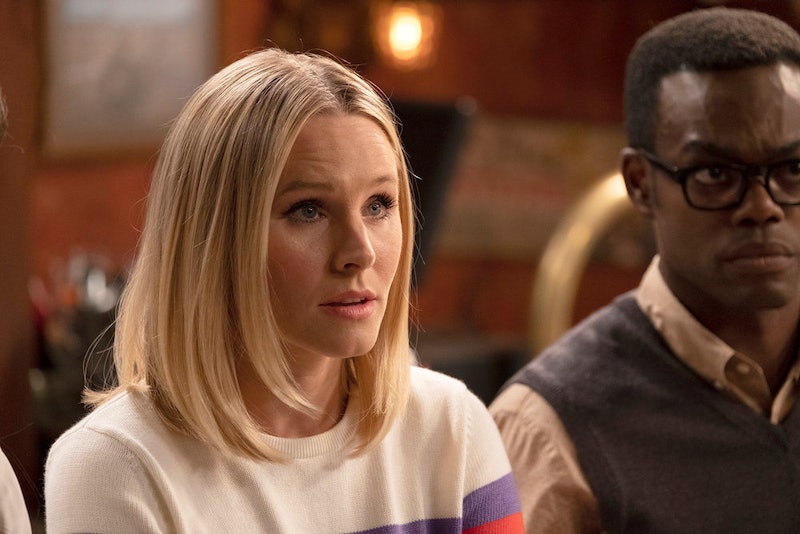 After becoming one of the most popular comedy series on TV since its debut in 2016, it's no surprise that The Good Place has been renewed for Season 4. The pickup, which The Hollywood Reporter revealed was announced by NBC on Tuesday, Dec. 4, arrives just days before the show's Season 3 fall finale. The renewal makes the show the second NBC series to earn a place on next season's schedule, following in the footsteps of Will & Grace which received the green light for its 2019-2020 season earlier this year. The number of episodes that have been ordered for Good Place's Season 4 have not yet been determined, according to THR. However, the outlet points out that each of the previous three seasons have comprised of 13 episodes.

Helmed by former The Office writer Michael Schur, who notably has a knack for creating long-lasting television comedies, The Good Place appears to be setting itself up for a long haul on television as it continues to garner a large weekly audience. Deadline indicates that the series averages a 1.6 rating in adults 18-49 and 4.6 million viewers overall in Live+7. Schur's backing as executive producer, and occasional director and writer certainly doesn't hurt, while it adds yet another notch on his impressive résumé. After writing for The Office for nine years, he later created Parks and Recreation in 2009 which ran for seven seasons. Schur also co-created Brooklyn Nine-Nine in 2013, whose sixth season will debut on NBC in January 2019.

Tracey Pakosta and Lisa Katz, co-presidents of NBC's scripted programming, shared a statement about The Good Place's exciting renewal, congratulating Schur on his latest accomplishment. The release, which was reported by THR, read:

"Congratulations to Mike Schur and an exceptional cast and crew, all of whom collaborate to create a thoughtful, mind-bending and hysterical series unlike anything else on television. We can't wait to see what unexpected stories the new season will bring."

The comedy, which stars Ted Danson and Kristen Bell as co-leads, has been both a critical and ratings success, ranking as NBC’s highest-rated comedy series. It also received a fair share of buzz on the awards circuit in 2018. The show got a nod for a Humanitas Prize Award and received the TCA Award for Outstanding Achievement in Comedy earlier this year. For his role, Danson received an Emmy nomination, making him the most nominated actor of all time in that category and also took home the Critics’ Choice Award for Best Actor in a Comedy Series, according to Rolling Stone. Meanwhile, Maya Rudolph's appearance on the show also received a nomination for Outstanding Guest Actress in a Comedy.

In addition to Bell and Danson, The Good Place's main cast is notably rounded out with a diverse group of talented actors that help bring inclusive storylines into the shows narrative, including: William Jackson Harper, Jameela Jamil, D'Arcy Carden, and Manny Jacinto.

With its twisty plotlines and inclusive ensemble of characters, The Good Place has cemented itself as mainstay in primetime television — and there's no doubt that its fourth season is going to be one of its best yet.