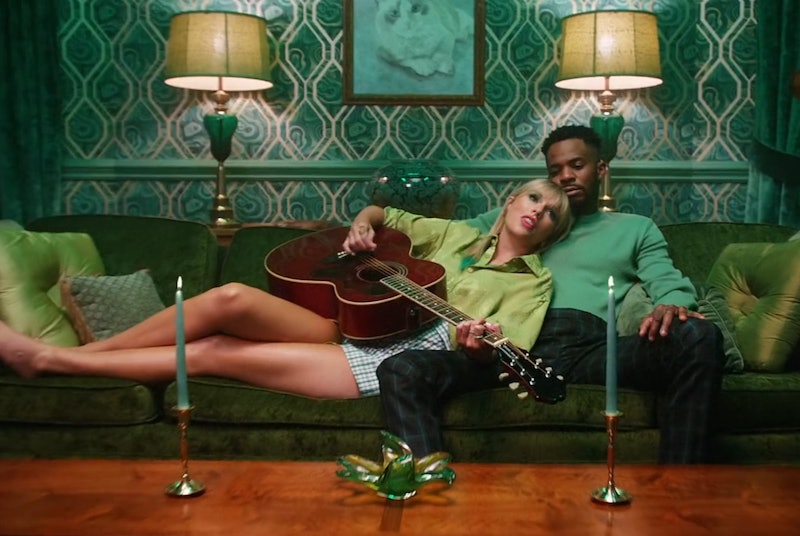 You may not have known the guy in Taylor Swift's "Lover" video for 20 seconds or 20 years, but he's someone true Swifties will definitely recognize. Swift's newest leading man is named Christian Owens, and, as the 10-time Grammy winner explained during her Aug. 22 livestream event called “Taylor Swift - Lover’s Lounge (Live)," he's someone she's performed on stage with for years.

"He's amazing. Every single night I could see how expressive he is and how just heroic and what an amazing actor he is, as well as being an incredible dancer," she said during the livestream of Owens, who was also the love interest in the "King of My Heart" performance on her reputation tour last year. "He's your new best friend, your new favorite artist ... he's one of the most talented people I've ever met."

Swift also noted that Owens is "an amazing musician," who's going to be putting out music soon and "every record label is going to be fighting over him." She even encouraged her fans to follow his Instagram account @owensc18 — so expect those follower numbers to skyrocket imminently.

Owens even posted a countdown clock in his IG Stories, ahead of the music video debut for the title track off of Lover — which Swift will officially drop on Aug. 23.

"Words cannot express how grateful I am for this woman @taylorswift giving me a chance to express my talent in such a different way !" Owens wrote in an IG post, after the video dropped. "Time and Time again you show how caring and giving you are .. everyone Check out the new #lover Music video . That I got the honor to co-star In 💘 ."

A further scroll through Owens' IG account shows that he and Swift do, indeed, go way back. In April 2015, he announced he was joining the singer on her world tour in support of 1989. Ever since then, his page has been filled with photos documenting his time touring with Swift, whom, a month later, he called "such an inspiring artist."

In a birthday tribute to Swift the following year, it became apparent that the pair had grown tight through their many collaborations. In the post, Owens wrote: "Yo happy birthday To this incredible woman ! @taylorswift .. glad to have toured the world with you and share so many great experiences ..Turn up ! 🚀🚀💯"

As it turns out, "Lover" isn't even the first major music video Owens has starred in this week. When Normani dropped her "Motivation" clip on Aug. 16, he immediately caught fans' attention, showing off some serious skill — and his chiseled body — dancing shirtless with the former Fifth Harmony member.

"It was such a pleasure to be apart of this project!!" he wrote in an IG post the day the same day the video dropped. "She is beautiful inside and out. 🌹"

Before winning hearts in these two new music videos, Owens already had a super impressive resume. Those who attended Coachella 2018 (aka Beychella) — or streamed the Homecoming documentary on Netflix — saw Owens dance with Beyoncé herself. But that wasn't even his first time doing so. As Owens revealed in another IG post, 2011's "Love On Top" music video was one of his "first major jobs with Miss Bey."

He described that experience in a 2015 IG post: "... a lot of ppl don't know this but she faught for me to be in this video Even tho I was on tour with Rihanna at the time. originally it was 4 boys She went against her entire video production team and said "I have to have this boy " I will never forget that !"

And if you didn't catch what he said, yep, he's also performed with Rihanna many times over the years — on tour and during major award shows (including the 2012 Grammys), among other places.

Also on the roster of artists he's worked with, as both a dancer and choreographer: Miley Cyrus, Demi Lovato, and Liam Payne. Oh yeah, and Owens was even part of Kendall Jenner's infamous Pepsi commercial in 2017.

Given his impressive body of work — and his newest romantic lead in Lover — Swift may have very accurately predicted that Owens will be your new favorite. And, for him, it seems the best is yet to come.