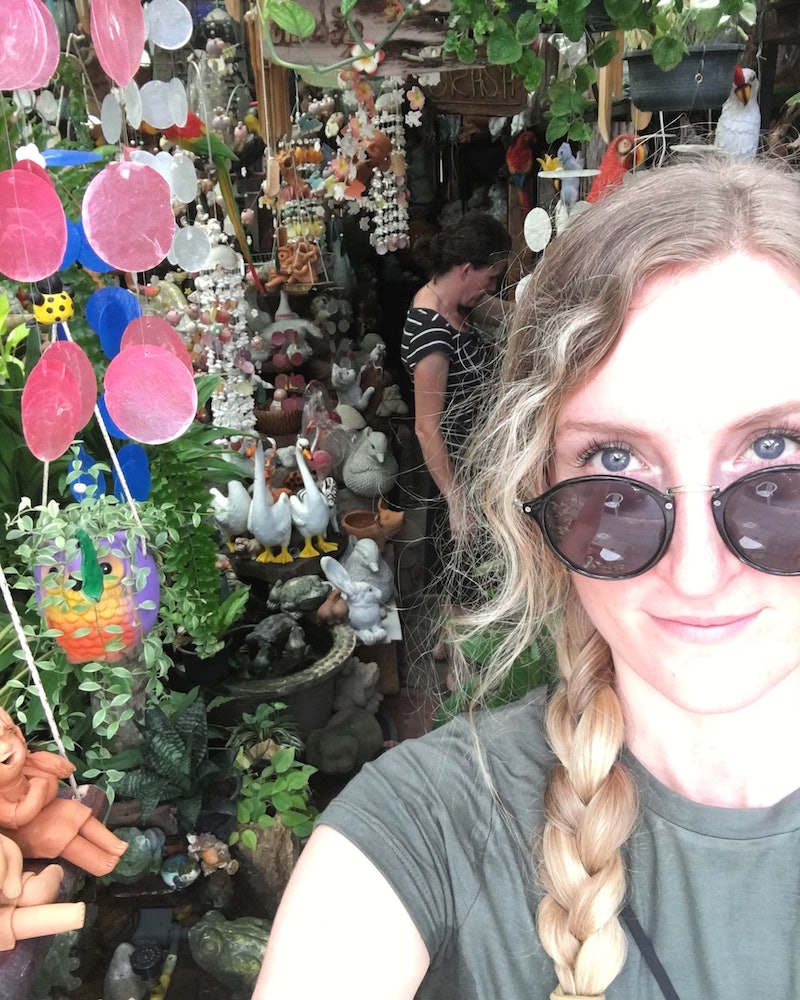 I don't know why it took me 26 years to become a vegetarian. For as long as I can remember, I’ve had an aversion to meat. Don’t get me wrong, I’ve eaten my fair share of cheeseburgers and bacon strips. (Often simultaneously.) I also happen to think that salmon tastes delicious. Still, everything from the texture of meat to the way it looks raw has always been off-putting to me. I mean, meat is literally defined as “the flesh of an animal.” On top of that, eating meat can be super-unsafe and unhealthy.

I’ve known these things for years, but it took me until fall of 2016 to really commit to a vegetarian diet. So far, the change has been good for me. I feel physically and emotionally healthier, and grocery shopping is somehow more fun now. In fact, the only crappy thing about this lifestyle change has been dealing with all of the annoying things I’ve heard since becoming a vegetarian.

To be clear, I’m not expecting anyone to pat me on the back for swearing off meat. I live in the Midwest — animal agriculture is a big deal here. Still, I think I’m doing something good by finally committing to a vegetarian diet. For me, cutting meat completely out of my diet has felt like a natural transition. I don’t need anyone else’s approval or congratulations to be happy about this. (Though support from fellow vegans and vegetarians is always welcome.) That said, I also don’t think it’s OK when strangers and friends alike ridicule and/or challenge any aspect of my lifestyle — especially when I didn’t ask for their opinion in the first place.

On that note, here are a few of the most annoying things I’ve heard since becoming vegetarian.

"You Know What 'PETA' Stands For, Right?"

If I hear one more person say that PETA stands for "People Eating Tasty Animals," I might lose my sh*t. This comment is neither funny nor true. On top of all that, it's tired and unoriginal.

"You're Not A Real Vegetarian"

More than one person has told me that I can't call myself a vegetarian because I sometimes eat dairy and eggs. These haters are always meat-eaters, and they are always misinformed. People tend to lump vegans and vegetarians together, and I can understand why. Both vegans and vegetarians care about animal rights and the environmental consequences of eating animals, so it doesn't bother me to be counted among vegans. That said, the dietary restrictions of vegetarians and vegans are not the same.

Unlike vegans, vegetarians often consume dairy, eggs, and honey. So while it would be 100 percent correct to say that I can't call myself a vegan — the fact that I've sworn off meat entirely means I get to call myself a vegetarian. Consuming dairy ice cream and cheese pizza doesn't disqualify me from vegetarianism.

"If Humans Don't Need Meat, Then Why Do We Have Canines?"

When someone asked me this at Christmas dinner last year, it took considerable willpower to hold back an eye roll of Liz Lemon proportions. I honestly didn't even know how to respond, because I just can't wrap my head around this kind of logic. I mean, yes, I do have canine teeth. They're undeniably pointed, and rather prominent. But so what? I have incredibly fair skin also, but that will never keep me from going out in the sun. (Even if I have to wear a baseball cap the whole time and apply sunblock every 30 minutes.)

Pointy as they are, my canine teeth couldn't rip through a steak. The fact that humans need steak knives and forks means the whole canine-teeth argument is flawed. On top of that, strictly carnivorous jaws are only capable of chewing up and down. Carnivores also have short intestinal tracts so their bodies can quickly pass the meat they consume. By comparison, human jaws can move up, down, and from side to side. Plus, humans have flat molars and long intestinal tracts (not unlike herbivorous cows and horses) — carnivores have neither.

As if all of that isn't enough to debunk the canine-teeth argument, several species of plant-eating animals have massive canine teeth. Hippos, gorillas, and the friggin' saber-toothed deer are all perfect examples of why canine teeth aren't just for carnivores.

"How Are You Getting Enough Protein?"

If it felt less like concern-trolling, I might be touched by the number of people who have expressed concern over my protein-intake as a vegetarian. Well-intended or not, though, this comment is super-annoying. Not only am I an adult human who should be trusted to feed herself properly, meat isn't the only (or even the best) source for protein. You can literally get all of your protein from plants. Just one cup of boiled lentils yields 18 grams of protein, and one cup of beans can provide a whopping 41 grams of protein. Hell, the USDA recently reported that even a slice of frozen, cheese pizza contains 8.4 grams of protein. Since most women only need about 46 daily grams of protein anyway, it's really not that difficult to get the protein you need without eating meat.

If you don't believe me, believe the many vegan and vegetarian athletes who have sworn off meat. Serena and Vanessa Williams, snowboarder Hannah Teter, and UFC fighter Nate Diaz are living examples of why you don't meat to make you strong. All three of these athletes have sworn off meat, and it's literally their job to be athletic badasses.

Even though I earned my hunting license at 12, I've never actually gone hunting. (I took the class primarily to learn about gun safety — shooting animals has never appealed to me.) Hunting is a big deal in my corner of the U.S., though, so I try to be diplomatic whenever the topic comes up. As it turns out, the only positive hunting-related comment I can ever come up with is some variation of the statement above.

I suppose I've always thought, if you're going to kill an animal, then you should at least make it's death count for something. I don't think I can continue justifying hunting in this way, though. For one thing, it's a fact that most hunters don't eat what they kill. According to a 2013 study by Responsive Management, only 35 percent of hunters polled said they were into hunting for the meat. But even if that percentage was closer to 100, I still wouldn't be able to keep saying comments like the one above.

I've heard all the arguments for why hunting can be good for the environment, and I know not all hunters are bloodthirsty-trophy-seekers — but I've reached the point where all hunting feels like a waste of life to me. I'll keep being nice to hunters, but I'm done defending a tradition that I find inherently unkind and unnecessary.

It is possible to love animals and also eat meat. I've spent nearly my entire life living with animals, and I've always considered myself an animal lover. That said, with the exception of a few months during high school, this self-proclaimed love didn't keep me from eating cheeseburgers and turkey subs for many years. None of this changes the fact that comments like, "I want to eat it, not kill it," just don't make sense to me anymore.

Look, I'm not trying to demonize meat-eaters here. Also, I realize that there are ways to eat meat without supporting huge feed-lots and slaughterhouses. Still, if you support industries that profit off of animal cruelty — whether you do so by ordering steaks or buying cosmetics from companies that test on animals — then you're partially responsible for the suffering of animals that you don't actually want to harm. This isn't me passing judgement, either. It's simply how supply and demand works.