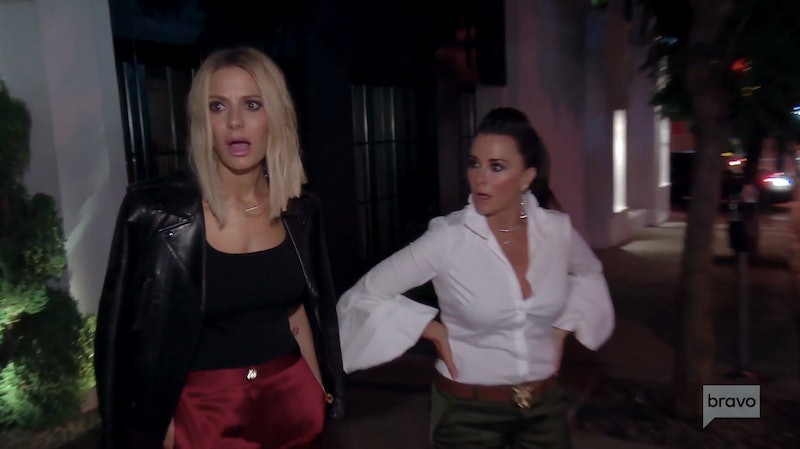 The ladies representing the 90210 are back with one new face, and their all too familiar drama. Get prepared, because The Real Housewives of Beverly Hills' Season 8 trailer just may leave you speechless. Yet at the same time, fans can't help but have so much to say about it all over Twitter.

Lisa Vanderpump, Erika Girardi, Dorit Kemsley, Kyle Richards, and Lisa Rinna all return this time around, and the preview opens with a sneak peek of each of the cast members totally engulfed in their business ventures and passions. Vanderpump is settling in as editor-in-chief of Beverly Hills Lifestyle magazine, and gives viewers a look into herself and Richards getting their hands dirty at her Vanderpump Dogs rescue location.

Richards also has her hands full with her TV Land production American Woman, starring Alicia Silverstone. Girardi, aka Erika Jayne, is looking ultra-sexy during a photoshoot seemingly for her music career. And Rinna is traveling the world behind her two daughters, playing the role of "momager" as they light up the fashion runways. Season 8 seems to be one big sightseeing adventure for the ladies as well, as group trips to New York City, Las Vegas, Tokyo, and Berlin make cameos.

All seems to be good in RHOBH land on the surface, but fans know that there is a lot of drama brewing behind those lovely faces.

Missing from the trailer, however, are all of the theatrics Season 7 so graciously delivered at the top of 2017, and fans definitely noticed. A lot of viewers felt as though the trailer didn't deliver on the drama factor like it should have, and so they wasted no time sharing their disdain.

But on the flip side, there were quite a few viewers who thought the trailer did the stars of Beverly Hills justice. Seeing all of the ladies come together to throw parties instead of wine glasses served as a bit of a refresher. And who could be mad at Girardi and Kemsley bonding on screen after Season 7's #pantygate. Because... balance, folks. Balance.

Stepping into the limelight this season is daughter of rock legend John Cougar Mellencamp, and new housewife Teddi Mellencamp Arroyave. The wife and mother of three is keeping herself busy with her fitness endeavors, but apparently makes time for dosages of occasional drama too. In the trailer, Arroyave made it more than clear that she's "not going to back down when I know I’m right," showing that she'll totally fit right into the outspoken cast.

And, of course, her giving a taste of her fiery personality is already making her a favorite amongst fans.

Also joining the Beverly Hills' ranks is Season 1 and 2 alum Camille Grammer, but this time as a "friend" to the show instead of an actual housewife. Making this distinction, however, didn't sit well with those tuning in. And some felt as though Bravo choosing to acknowledge Grammer as a "friend" of the show in its eighth season was a total oversight. Because, as fans of the show know, Grammer's presence is nothing new — she's been poking her head in and out forever.

The real drama, however, begins to rear its ugly head toward the end of the Season 8 preview. Arroyave speculates that Rinna could be schizophrenic; Richards calls Vanderpump out for being self-centered; Girardi makes it clear that she's not one to mess with, and her parting words of "you have to cut the head off the devil" are enough to give any unsuspecting viewer chills. And last, but certainly not least, Vanderpump delivers the ultimate kicker when she leaves Kemsley and Richards absolutely speechless with a seemingly melodramatic exit from an event.

RHOBH definitely looks like it's going to bring its A-game on Dec. 19.