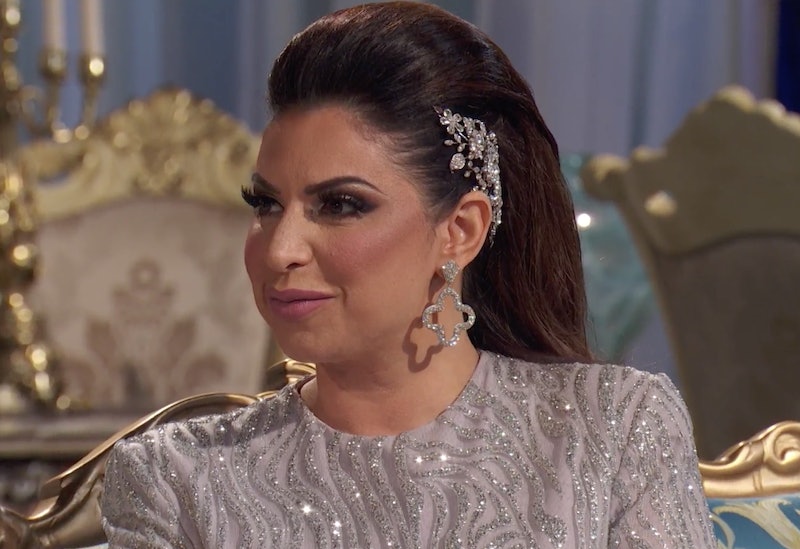 There's no denying this season of Real Housewives of New Jersey has been the best one in a really long time. If you agree, you're going to want to watch the RHONJ Season 9 reunion trailer immediately. The footage for the three-part gathering (yes, three parts!) dropped on Tuesday and it is, of course, beyond dramatic. That said, newcomer Jennifer Aydin is the one who really stands out in the video.

The trailer starts off with Jennifer chatting with reunion host Andy Cohen, but she isn't in her gown. Oh, no, Jennifer can be seen wearing a black and gold boxing robe with the hood up and her name "Jennifer" sprinkled on the back in gold glitter. Andy says to her, "Wow! You're ready!" She replies, "I'm ready."

As fans know, Jennifer has had quite the season as a first-time Housewife. Mainly, Jennifer has found herself in major and out-of-line arguments with Margaret Josephs. For example, like when they traveled to Oklahoma and Margaret accused her of being a "one-upper" and that other time in Mexico when both Margaret and Jennifer brought each other's families into their fight. Basically, Jennifer has found herself in much heated water throughout Season 9, and even with Melissa Gorga and other newbie Jackie Goldschneider when she wasn't arguing with Margaret.

All that said, Jennifer wasn't scared off whatsoever, even at the reunion.

The first heated and unnecessary line that comes out of Jennifer's mouth in the trailer is directed at none other than Margaret. She yells, "I'm not going to feel pity for a woman who was a home-wrecker." Margaret responds with an eye roll and says, "Oh, puh-lease."

Jennifer is referring to Margaret meeting her current husband, Joe Benigno, while she was still married to her ex-husband, Jan Josephs. Their relationship and how it began is a topic Margaret has been completely open about since day one.

Then, another reunion moment shows Andy asking about Jennifer, "Who here thinks she's a one-upper?" Jackie, Melissa, and Margaret all raise their hands. Jennifer responds by pointing at them and making the following Three Stooges reference: "Larry, Curly, and Moe."

Based on the trailer, Jennifer definitely didn't hold back at the reunion. She also isn't the only one throwing shade or shocking Andy. At one point, Teresa Guidice yells at Jackie referring to the new Bravolebrity's formerly estranged relationship with her sister, "That's why you don't even talk to your own sister, white trash b*tch." Eventually, the argument leads to Teresa grabbing Andy's note cards and let's just hope this isn't another situation where the OG Housewife pushes Andy, like she did at the RHONJ Season 2 reunion.

Speaking of Teresa, there also appears to be a moment when she discusses Joe Giudice's potential deportation that could occur once he serves his 41-month prison sentence as a result of pleading guilty, alongside his wife, to 41 counts of fraud in 2014. In 2015, Teresa served an 11-month prison sentence. (Bustle previously reached out to Teresa's rep for comment, as well as Bravo, regarding the deportation news, but did not receive an immediate response.)

Andy is seen saying to her, "What you're saying is that you will go your separate ways." Teresa is then shown wiping away tears. Zero context is given regarding Andy's statement, so it's unclear if he's discussing the possibility of Joe's deportation and exactly why Teresa is crying.

Whatever the case, there's no denying that this season's reunion is going to bring all kinds of emotions to the forefront. Let's just hope the ladies walk away by apologizing and supporting one another, rather than hurling even more insults.