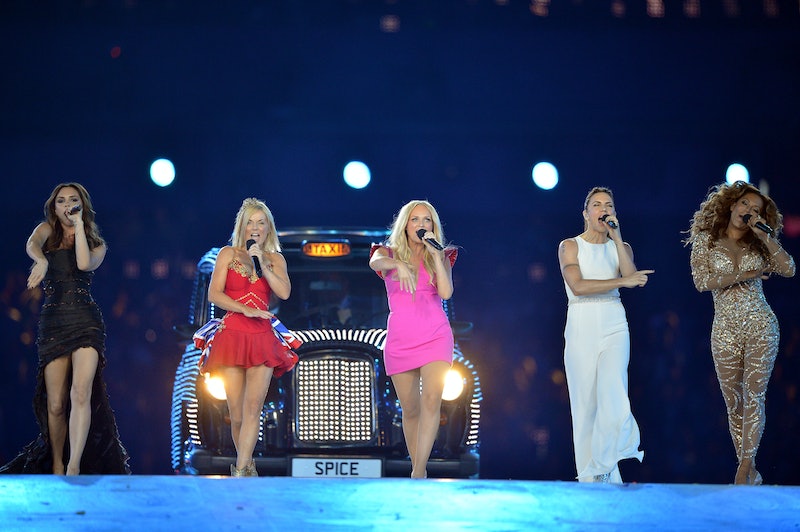 Stop doing whatever you're doing right now, thank you very much, because some members of the Spice Force Five took a photo together this week and it is on Instagram and, duh, it rules. Melanie Brown shared a screenshot she took in the middle of a Spice Girls FaceTime chat on Monday, and it'll give you everything you could possibly want out of a FaceTime chat screenshot. Well, almost everything.

Earlier this week, Spice Girls Mel B, Melanie Chisholm, and Emma Bunton FaceTimed with Spice Girl Geri Horner. Spice Girl Victoria Beckham was not a part of the call. Like I said, the photo will give you almost everything. "Nothing like a spice girls face time," Mel B's caption reads. "#friendshipneverends #girlpower #chitchat yipppeeee." Scary Spice isn’t exaggerating: There really is nothing like a Spice Girls FaceTime. Now, what might these four pop legends have to chat about? Perhaps their conversation touched on a certain rumor that's been going 'round in circles ever since the group got back together for the 2012 Summer Olympic Games? (Oof, it really does feel like this déjà vu will never end.) Did they address the very subject that came up when Scary Spice was a guest on the Sept. 24 episode of Loose Women? Could they actually be plotting this reunion tour once and for all?

Oh, to be a platform shoe-wearing fly on the wall of this conversation.

When Mel B appeared on ITV chat show Loose Women earlier this week, she said a Spice Girls tour is indeed still in the works. "There is a reunion happening," she told the show's hosts. "A tour, yeah … I'm not supposed to say when, but it's happening."

Of course, this is not the first time we've heard the Spice Girls reunion tour is underway. Far from it. Less than two weeks ago, for example, Mel B went on The Late Late Show and, once again, assured James Corden that the reunion tour is "100 percent" happening. She went on to say that four of the members are "on board for sure," but Beckham is a different story.

"We'll see about that one. Us four are definitely going to be going on tour. She may join us for a few. She better do."

Well, that may not be entirely true anymore. According to Mel B, some of the Girls could go on tour after all; Posh Spice, however, continues to dig her stilettos in.

Whether the Spice Girls reunion tour actually happens or remains but a dream, at least we will always have that picture all five members took together in February. Friendship, girl power, and iconic IG posts never end.