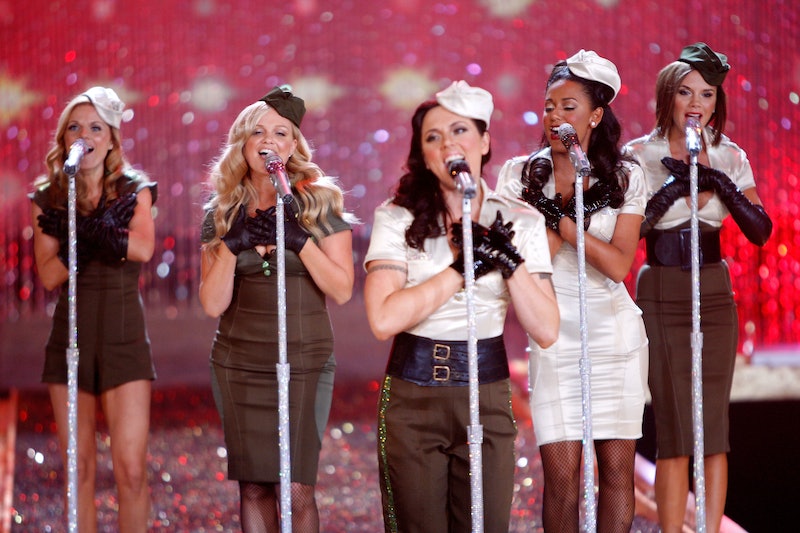 There are five stages of coming to terms with Spice Girls reunion tour rumors. First, joy overtakes your being and all but liquifies your insides. Next, you calm down a bit and remind yourself that it could be a while before anything happens. After that, you remember you’ve been through this before, so maybe don't get your hopes up. But then, you tell yourself this could be the real deal. Finally — and it could be years before this stage happens — you accept that the rumor will never come to fruition.

But every now and again (e.g., the 2012 Summer Olympics, the 2007 Return of the Spice Girls tour, the 2007 Victoria's Secret Fashion Show), a sixth stage occurs. And that is the "Holy Chupa Chups, it is actually happening" stage. And that stage makes the first five so, so worth it.

“I’m the only one who keeps on saying, ‘We’re going be performing’ — which we are going to be performing. Finally, they’ve got it together.”

When Kotb mentioned Beckham has said otherwise, Mel B replied,

“She’s always saying that. Stop it. We are touring … Should I have really said that out loud? Yes, we are going to be doing performances together for sure.”

Let's hope we get to stage number six this time, eh?

This current era of Spice Girls reunion rumors began about two years after the Spice Girls reunited at the 2012 Summer Olympics and delivered an epic performance during the closing ceremony. In 2014, rumors of a world tour with the Backstreet Boys circulated in the ether for years. Obviously, this joint tour never happened.

But will a (second) Spice Girls only reunion tour ever happen? In 2015, some Spices said they would be down to get back together for the 20th anniversary of "Wannabe," and that's when the reunion chatter really started to pick up steam. Key word: some. Beckham has made it pretty clear that she is not interested in getting the group back together for any sort of reunion tour; Mel C has gone back and forth on the issue.

GEM might've fizzled out, but the Spice Girls reunion talk continued on its merry way. During a January 2017 Lorraine appearance, Mel C said she hadn’t entirely ruled out the possibility of one day getting the band back together. Posh Spice, however, continued to dig her heels. In March of the same year, Beckham told The Today Show’s Savannah Guthrie that “there won’t be a reunion.”

But then, eight months later, The Sun reported that a Spice Girls reunion allegedly was in the works. And according to the magazine's source, even Beckham was apparently game. The unnamed insider claimed to The Sun,

“The five of them have been locked in secret talks since the summer, and finally they are all on-board for a 2018 reunion. As it stands, they will be working together on a series of projects, which will include an album and a TV special celebrating the Spice Girls And getting Victoria to agree has been a coup for everyone involved, given she has always been the person holding back on a reunion.”

And then, something happened that all but broke the Spice World: On Feb. 2, 2018, the Spice Force Five got together at Horner’s home and took some photos for the ‘gram. Less than a week later, TMZ reported that the reunion tour was happening. But a few days after TMZ shared the unnamed sources’ claim, Beckham told Vogue UK that the Spice Girls “aren’t going on tour.” Tell me, will this déjà vu never end?

Reunion tour or not, it sounds like the quintet may have at least one project on deck. In March, Variety reported a Spice Girls animated movie is in the works. When she appeared on chat show This Morning in June, Bunton confirmed that an animated superhero movie based on the group is “something we are talking about.” As for the whole tour thing? She replied, “not sure, but a few shows would be great.”

And may we never forget about the rumor that the group would spice up the royal wedding's life. In February, Mel B went on an episode of The Real and said the Spice Girls were going to the royal wedding and basically implied they would perform at the reception. A week later, however, Mel C said the group had not been invited. When asked about Mel B’s royal wedding comments at the Prince’s Trust Awards, Sporty Spice told Hello! magazine,

"I think that might be a little bit of a joke that got a little out of hand! There are no plans for that unfortunately."

But that did not stop the rumor mill. On May 11, Us Weekly reported that all five would be at the wedding. On May 16, Page Six reported a source’s claim that “Only Victoria, Emma and Geri were invited, so clearly, the Spice Girls were never going to perform.” The next day, Mel C appeared on Australian radio show Fitzy & Wippa and said the group was not invited to the royal wedding. When Prince Harry, Duke of Sussex, and Meghan, Duchess of of Sussex, got married on May 19, Beckham was the only Spice in attendance.

About a month after the Spice Girls did not go to the royal wedding, Mel B assured Kotb, Today viewers, and Spice Girls fans everywhere that a reunion tour is a go. If you believe this announcement, great. If you decide to take it with a grain of salt that's as big as the fish tank on the Spice Bus, no one can fault you. Whatever you do, be sure to protect your platform shoe-shaped heart.