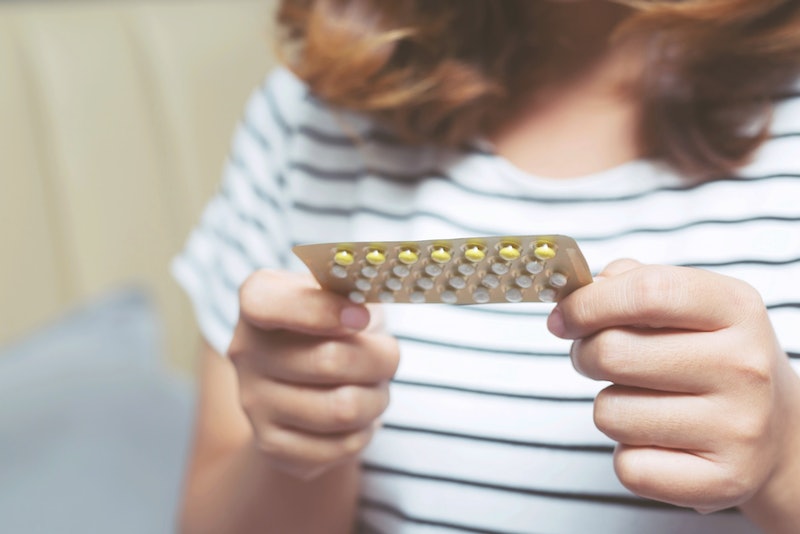 According to a new Guttmacher Institute report, the U.S. abortion rate is the lowest it's been since it was first tracked in 1973. But it's unclear how we should feel about this. Part of the explanation is that fewer people are ending up with unwanted or unplanned pregnancies, which is of course a good thing. But knowing that we're also currently living in a climate with more and more restrictions to abortion being introduced all the time, there's something else that might be contributing to the figure — and it's a lot more troubling: It isn't outside the realm of possibility that some people may be becoming parents against their will because of the rapidly diminishing access to safe, affordable abortions.

After the 1973 Roe v. Wade decision, which prohibited states from outlawing abortion, the abortion rate increased, likely because the procedure became more available. There were 1.6 million abortions in 1990, when the rate reached its peak.

One reason the abortion rate is declining, report authors Rachel Jones and Jenna Jerman told CBS News, is that fewer unplanned pregnancies are occurring. We likely have increasingly accessible and affordable birth control to thank for that. Furthermore, it's been found that banning abortion doesn't actually decrease the rates of abortion at all; indeed, the fact that there are fewer abortions occurring during a time when the procedure is safe and legal suggests that it's actually access to abortion that helps decrease the rates instead.

But with the end of Obamacare, that could soon no longer be the case. Many people have rushed to get IUDs before Trump takes office, since contraceptives could become expensive under his administration.

Which brings us to to the possibility of people becoming parents when they didn't want to because they lack access to the procedure. The number of places providing abortions in the U.S. decreased by three percent between 2011 and 2014, according to the report, and the number of clinics specifically for abortions went down by six percent. In addition, these three years saw the passage of many laws that imposed waiting times, ultrasounds, and other restrictions and requirements on people seeking abortions.

Supporting the theory that such limitations are to blame, Wyoming, Mississippi and South Dakota — which were each home to just one abortion clinic in 2014 — had the lowest abortion rates. "It can be very difficult for [people with an unintended pregnancy] to arrange for time off from work, transportation, and child care," Jones told CBS. "Some of the abortion rate decline is likely attributable to women who were prevented from accessing needed services."

It's unclear whether the Guttmacher Institute report counted self-induced abortions, but a New York Times analysis of Google search data suggests they could've gone up since 2011. While the actual rates are hard to identify, people have been researching how to perform them more over the past few years. This predicament could, of course, get even worse if Planned Parenthood is defunded.

During the third presidential debate, Trump said when pressed that he planned to appoint justices to the Supreme Court who would overturn Roe v. Wade, making abortion a state decision rather than a federal one. Most Americans, however, are opposed to the idea overturning of Roe v. Wade, according to a recent Pew research study. All of this put together points toward a need to protect our reproductive rights in a political climate that's putting them at increasing risk.

More like this
12 Ways You're Sabotaging Your Love Life
By Teresa Newsome and Lexi Inks
How To Use The Whatnot App To Thrift Vintage Items
By Emma Carey
The “Teenage Dirtbag” Trend Is TikTok's Latest Nostalgic Obsession
By Meguire Hennes
Your Daily Horoscope For August 17, 2022
By Alexandria Lettman
Get Even More From Bustle — Sign Up For The Newsletter