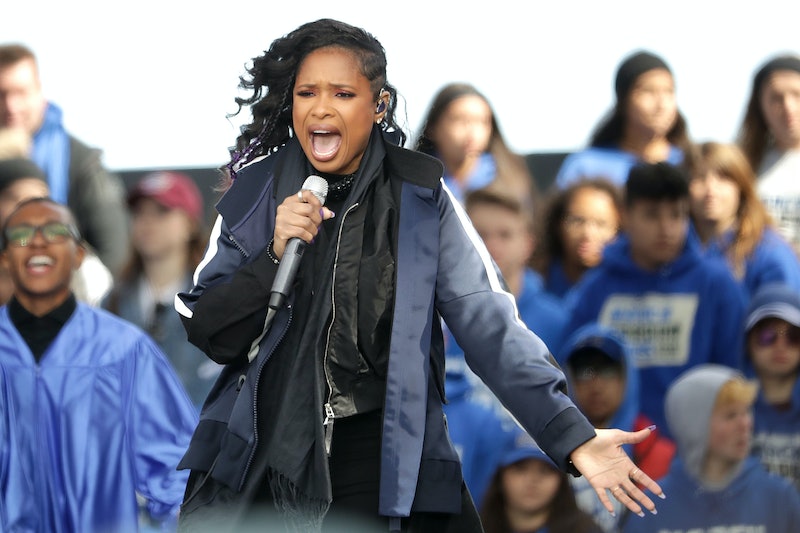 In 2008, Oscar-winning actor and singer Jennifer Hudson lost her mother, brother, and nephew to gun violence. On Saturday, March 24, the video of Jennifer Hudson's March for Our Lives performance closed out the event and it was so very powerful. Hudson sang the classic Bob Dylan song "The Times They Are a-Changin'" along with the students of Marjory Stoneman Douglas High School in Washington, D.C.

Hudson took to the stage to sing Dylan's 1965 sing, which has long been an anthem for social change. It was written in the '60s at a time when the Civil Rights Movement was in full swing, and its power hasn't diminished over time, as the gospel-inspired performance at the march illustrates. Seeing Hudson standing alongside so many young people whose lives have been touched by gun violence drove home exactly why the event is so important. For the students from Parkland, Florida, and the countless others who have had to face active shooter situations across the country, the time to enact common sense gun laws is now.

In the middle of her stirring performance, Hudson paused to say, "We all came here for change. We're all here for a reason: We want change." She then led the crowd in chanting, "We want change." Hearing so many voices come together to call for action is inspiring, but it's also poignant in light of the speech that preceded the final performance of the march.

Before Hudson came on stage, Parkland survivor Emma Gonzalez gave a moving speech during which she paused for a six-minute long moment of silence. The six minutes represented the length of the shooting that changed her life, and the lives of her classmates. For Gonzalez and so many other young people around the country, the Parkland shooting marked a moment when they knew the only way change is going to happen is if they lead the charge.

And that's exactly what the March for Our Lives is about. Around the country, students and their allies gathered on Saturday to take a stand against gun violence, but the events are just the beginning of a much larger movement. March for Our Lives' student organizers will continue to fight for change through the initiative of the same name. As the midterm election approaches, they will be urging voters to back politicians who will advocate for stricter gun control laws, and working to get out the vote, particularly among young people.

These young adults have already proven that their voices won't be ignored, and thanks to celebrities like Hudson, they have a group of supporters who are ready and willing to help them in any way that they can. During the march, many musicians used music to help support the cause. In addition to Hudson, there were performances by Ariana Grande, Demi Lovato, Miley Cyrus, and Lin-Manuel Miranda and Ben Platt.

As Dylan's "The Times They Are a-Changin'" illustrated decades ago, music and activism go hand-in-hand, and it feels appropriate that his song is still a part of the conversation today. Hudson, along with the choir and students who joined her in singing the famed Civil Rights anthem, is using her talent to help lift up the voices that are working so hard to make a difference. Her performance was the perfect way to close out a day of action.

While the students at the heart of this movement still have a long road ahead of them, their strength and commitment shined through today. As the song says,

Don't stand in the doorway/Don't block up the hall

For he that gets hurt/Will be he who has stalled

There’s a battle outside and it is ragin'"

If the politicians in Washington are wise, they won't stand in the way of the passionate young people who are planning to use their vote to end the cycle of violence in this country.