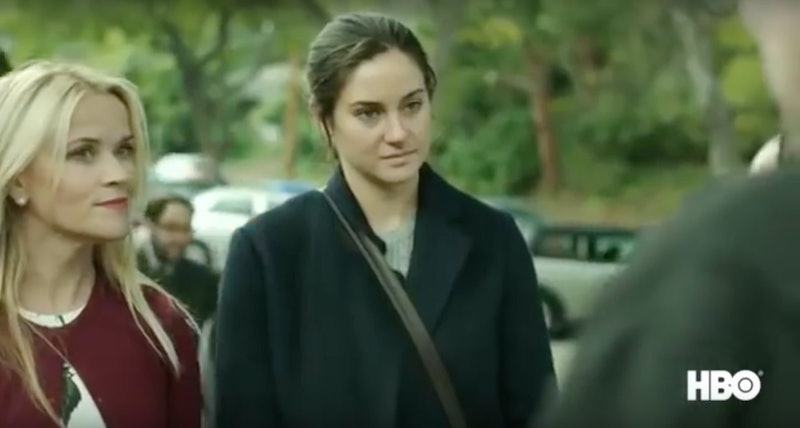 Big Little Lies Season 2 can't get here fast enough. And now with this new bit of casting news, that statement has never been truer. According to Vulture, there are a couple of pivotal Big Little Lies characters returning to the HBO stage for its upcoming season, and it's seemingly all to help tie up some of those important, loose ends from Season 1.

For starters, Detective Adrienne Quinlan, played by Merrin Dungey, will be coming back to Monterey to question those close to the sudden death of Perry Wright, as expertly portrayed by Alexander Skarsgård, in Season 1. And as Vulture reports, the detective's recurring role hints that she doesn't quite believe the accounts of everyone in the community, thus having a little more digging to do. Also coming back for more is Celeste Wright's (Nicole Kidman) therapist Dr. Amanda Reisman, as played Robin Weigert. Reisman's Season 2 recurring role could mean that Celeste, the widow of Perry Wright, is going to be unpacking a lot of bottled up emotions. And who knows, maybe Dr. Reisman could lend a helping hand to Shailene Woodley's Jane Chapman — you know, seeing as Jane and Celeste share a very, eerie connection.

Reese Witherspoon's character, Madeline Mackenzie, will apparently have her work cut out for her also in the upcoming season. It's being reported that Madeline's eldest daughter, and troublemaker, Abigail Carlson (Kathryn Newton) will be back as a series regular, along with Madeline's not-so-secret flame's wife, Tori Bachman (Sarah Sokolovic).

The latter should serve as no real surprise to fans of the show, however, as Season 1's finale totally hinted that the wife was unto her husband, and Madeline's theater collaborator, Joseph Bachman's (Santiago Cabrera) affair with the Monterey "it" girl.

Other major casting developments are that of Bonnie Carlson's (Zoë Kravitz) family member, and finally, the casting of the grade school teacher supposedly shaking things up at the Monterey elementary school, and as a result, bumping heads with Renata Klein (Laura Dern). According to Vulture, Bonnie's mother, Elizabeth Howard, will be played by The Haves and the Have Nots' Crystal Fox, and Michael Perkins will be portrayed by Sons of Anarchy's Mo McRae. Both characters will play super important roles in the upcoming season — with Elizabeth offering more insight into the traumatic upbringing that Bonnie made mention of throughout Season 1, and with Mr. Perkins seemingly introducing his young students to some pretty controversial topics — like, global warming.

Season 1's drastic ending suggests that Season 2 will be all about the aftermath of Perry Wright's death. Speaking of Perry Wright, his mother will be introduced into the fold, as well— hopefully providing a nice bit of context to Perry's terribly, abusive behavior. Oh, and the best part about this, you ask? Mrs. Wright will be played by the legendary Meryl Streep. Yes, the Meryl Streep is making a move to television acting. And with that, Big Little Lies just may be the most star studded show on television when it returns.

As of now, an official premiere date for its next season has yet to be announced. According to HBO programming chief Casey Bloys, fans won't get to sink their teeth into Season 2 completely until at least 2019. But honestly, with all of this casting information on the rise, fans will totally have what they need to hold them off until it comes back. On the bright side, however, this long hiatus will give those new to the BLL scene more time to both indulge in and dissect its first season — catching up with everyone else.

Needless to say, BLL Season 2 will be a total must-see.

More like this
Who Could Die In The Stranger Things Season 4 Finale?
By Kadin Burnett
Regé-Jean Page Spoke Out On His Rumoured 'Bridgerton' Return
By El Hunt and Maxine Harrison
The ‘Love, Victor’ Showrunner Gave Fans Hope For A Possible Spinoff
By Brad Witter
Legacies Showrunner Said There Is Still Hope For More Vampire Diaries
By Gretchen Smail
Get Even More From Bustle — Sign Up For The Newsletter