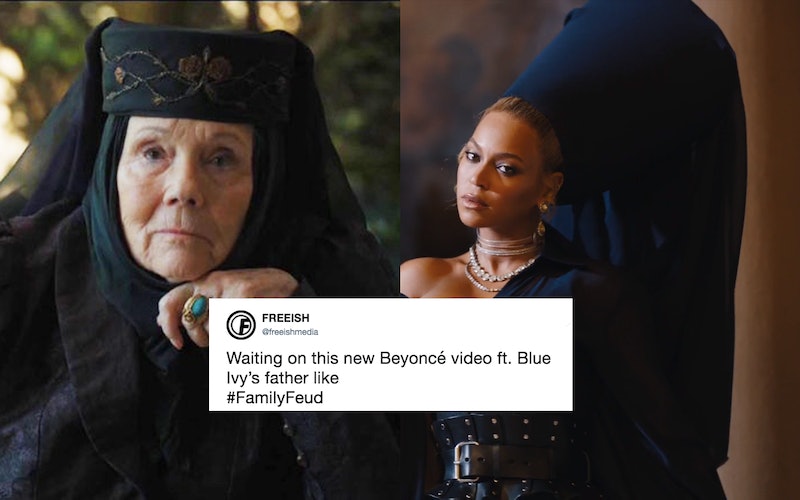 When a power couple as high-profile as JAY-Z and Beyoncé make a music video together, you know fans are going to sit up and pay attention — and make memes. In fact, the Beyoncé and Game of Thrones "Family Feud" meme is just getting started. While watching the full-length video on TIDAL on Dec. 29, fans of both Beyoncé and Game of Thrones happened to notice a couple of connections between the way Queen Bey is dressed and a certain other badass woman whose unfiltered awesomeness is her legacy: Lady Olenna Tyrell. And the Game of Thrones memes and jokes didn't even end there.

As viewers remember, in Season 7, after being outmaneuvered by the Lannisters, Jaime Lannister offered Lady Olenna poison to make her death more merciful. The elderly woman agreed to drink it and, as she did, informed Jaime that she'd killed his son the same damn way. (Previously, Jaime hadn't known of her involvement.) As she died, she said to tell his sister-lover and current queen Cersei, because Olenna "want[ed] her to know it was me." Mic drop.

Now, Beyoncé stops the beat and drops the mic wherever she goes, but her outfit in the "Family Feud" video made viewers think of Olenna almost immediately. And the jokes just wrote themselves.

This photo of Lady Olenna is so relevant to so many things, but, in describing the long wait for the "Family Feud" video to drop, it will live in infamy. Especially since the way that Lady Olenna is dressed in this video really does look near-identical to the way that Beyoncé is dressed in the "Family Feud" video, especially when it comes to that hat. Did Lady Olenna get reborn as Beyoncé in this life? (Can we all be reborn as Beyoncé in our next lives? asking for a friend.)

The way Beyoncé gives the camera the eye in the music video definitely makes it look like she wants you to know it was her. In fact, her appearance in the teaser was one of the many reasons that fans were so excited, as speculation about JAY-Z and Beyoncé's relationship — especially after she released Lemonade and especially after he admitted to cheating on her in a New York Times interview — has been on fire. If Beyoncé wants anyone to know it was her, it's probably us she's silently talking to; after all, JAY-Z has been open about how much creative influence she wielded on 4:44. (In fact, Beyoncé did back-up vocals on "Family Feud.")

If you're picking through the video for deeper meanings, here's one for you: Beyoncé and JAY-Z are actually Game of Thrones nerds, and this entire video is a nod to that. That shouldn't come as a surprise to fans of the pair. After all, in 2015, Emilia Clarke claimed in an interview with Harper's Bazaar that JAY-Z had bought Beyoncé one of the dragon eggs from the show: "Apparently JAY-Z bought one for Beyonce. I don't know... They are really, really, really expensive and they are really f*cking heavy and serious works of art." The couple never confirmed this, so should we take this video as their confirmation?

Game of Thrones being mashed up with Watch the Throne (aka JAY-Z and Kanye West's collaborative 2011 album)? Um, sign me up, can we get that in the works after Game of Thrones is over? Someone call HBO and tell them to cancel Confederate and do this instead.

Basically, if you were watching "Family Feud" and got some Game of Thrones vibes in one way or another, you were not alone. Let the House of Carter sit upon the Iron Throne, because they've just won the internet.

More like this
Gigi Hadid’s Dad Shared What He Knows About Those Leonardo DiCaprio Rumors
By Brad Witter
Everything To Know About Taylor Swift’s 10th Studio Album, 'Midnights'
By Grace Wehniainen and Jake Viswanath
What Demi Lovato Really Thinks About Child Stardom, Depression, & Sobriety
By Radhika Menon
Kanye West Apologizes To Kim K "For Any Stress I Have Caused" In Rare Interview
By Jake Viswanath
Get Even More From Bustle — Sign Up For The Newsletter