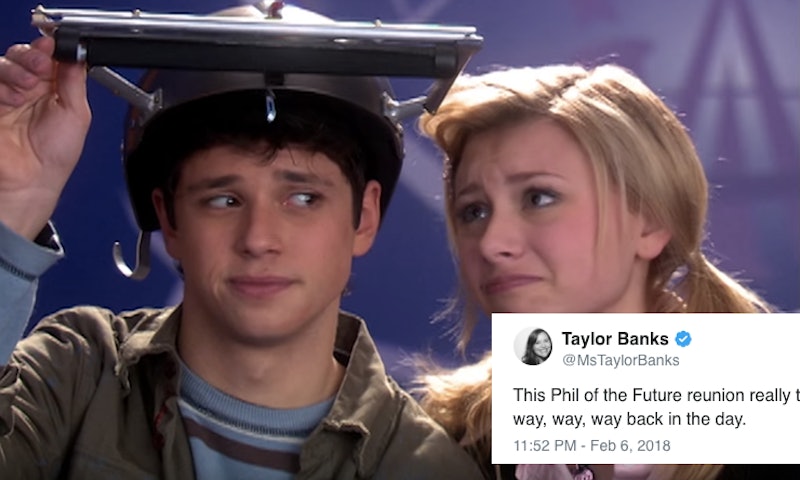 Early '00s Disney Channel enthusiasts are in for quite the treat. The Phil of the Future cast had a mini reunion recently, and stars Raviv "Ricky" Ullman and Aly Michalka shared the adorable moment on Instagram. The picture, which also included Michalka's sister and bandmate AJ, provided the exact amount of nostalgia that the internet needed. And as you've probably already guessed, fans on Twitter couldn't help but rejoice.

Phil of the Future was introduced to the Disney Channel line-up in 2004, and the show was about a futuristic family from the year 2121 getting stuck in the year 2004 after their rented time machine malfunctioned while on vacation. Ullman starred as the adorable, 22nd century teenager Phil Diffy, and Michalka starred as Phil's best friend and 21st century partner in crime, Keely. Rounding out the Diffy family and the rest of the hilarious cast are Amy Bruckner, who played Phil's up-to-no-good younger sister Pim; Lise Simms, as the Phil and Pim's mom Barb; and Craig Anton, as the Diffy family's patriarch, Lloyd.

The show came to a bittersweet end in 2006, but that didn't stop fans from obsessing over its greatness. And their reactions to Ullman's latest Instagram with other former Disney Channel big shots, singing duo Aly and AJ, totally prove this to be true.

According to Just Jared Jr., Ullman and Aly and AJ reunited at the AMO Ferragamo Launch Party in New York City on Tuesday, Feb. 6. Aly and AJ performed at the event hosted by Suki Waterhouse, and Ullman was among the guests in attendance. The trio looked happier than ever posing together, and Ullman's caption highlighting just how he felt about mingling with the musical duo will totally make you smile, too. He wrote,

"Big ❤️ for these two ol pals and the great music they’re making. They’ve grown way taller and cooler than I. At least we’re all equally pink."

With the hashtag #tweetlikethe2000s making its rounds on Twitter over the past couple of weeks, the Phil of the Future reunion photo couldn't have come at a better time.

"Happy" and "grateful" seem to be the common themes out of all of the reunion photo reactions, and seriously, who on earth could even disagree?

Since starring on the Disney Channel, Michalka and Ullman have been keeping pretty busy. Other than adding his face, and voice, to the rosters of other Disney shows like Kim Possible and That's So Raven, Ullman has also lent his talents to a slew of comedies and action-packed dramas like Criminal Minds, Cold Case, and Broad City.

Aside from lighting up the musical scene with her sister AJ, Michalka could also be spotted on the big and small screens over the years. You may remember the talent from 2010's box-office hit Easy A, starring opposite Emma Stone as the larger-than-life best friend to Olive Penderghast. The actor also starred in popular shows iZombie, Two and a Half Men, and YouTube Red's series Ryan Hansen Solves Crimes on Television.

Does this mean that a Phil of the Future reboot is on its way? Well, an announcement of the sort has yet to be made. ans, however, haven't been silent about their need for the Disney Channel show to make a comeback just as Raven Symone's Raven's Home did in 2017, or at least for its seasons to be available on streaming platforms ASAP.

When it comes to going for the gusto and having a reboot, Michalka made it known that she'd totally be down. During a Teen Vogue interview back in August 2017, the Aly and AJ songstress said that while she doesn't know how the storyline would play out, she "wouldn't be opposed" to the show revamping and making a return to the small screen.

And with the successes of revivals like Will and Grace and Gilmore Girls paving the way, and Disney Channel's own project Raven's Home getting renewed for a second season, it's been proven that listening to what fans want could totally work in the network's favor. In the meantime, at least there's this reunion photo to hold them over.