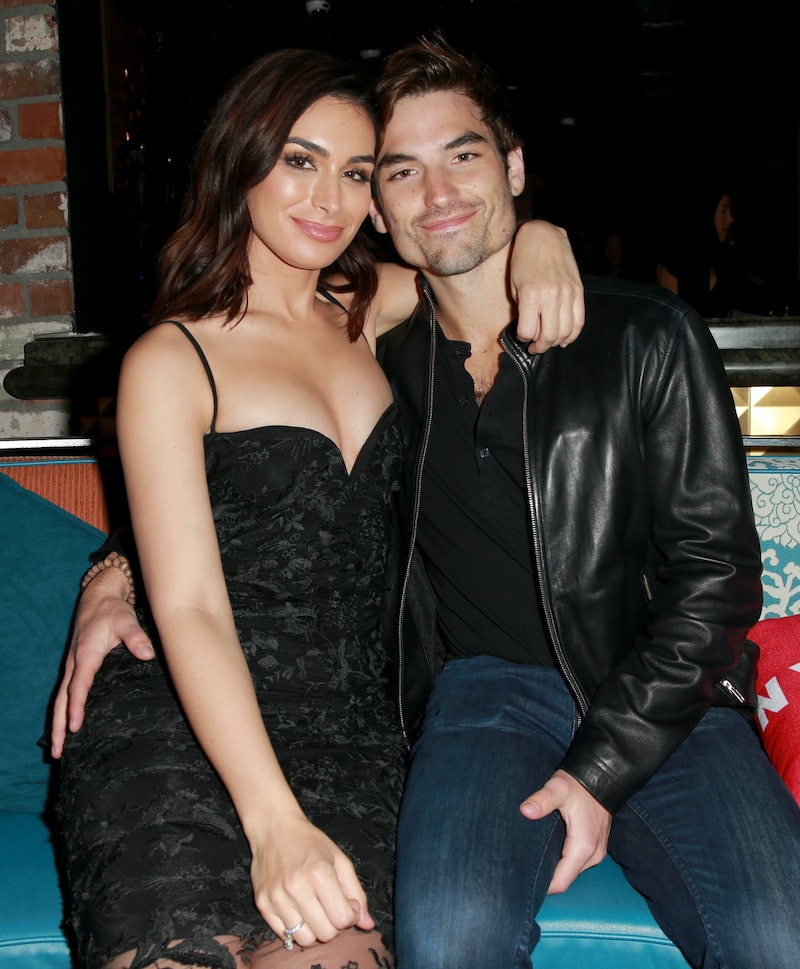 Stop everything, Bachelor Nation: There's a new engagement to celebrate, and it's a long time in the making. On Monday, People broke the news that Ashley Iaconetti and Jared Haibon are engaged. And the picture-perfect moment takes place on none other than Bachelor In Paradise Season 5. ABC confirmed the sweet news to Bustle, and a photo from Jared's proposal to Ashley on the beach in Mexico is enough to make fans swoon — and maybe even shed a few happy tears.

As for when you'll get to see it all go down, you may be in for a bit of a wait. Currently, ABC is airing Becca Kufrin's season of The Bachelorette, and there are still quite a few guys vying for her attention. Episode 4 airs this Monday, June 18, so there's still a ways to go before the season wraps and Paradise can begin.

Plus, there's a bit of a clue in the photo description of Ashley and Jared on ABC's press site. Apparently the engagement took place on Sunday, June 17, and is from Bachelor In Paradise Episode 504 (aka the fourth episode of the upcoming Season 5 of BiP). At least now you know which episode to stock up on the tissues for, and of course, some celebratory champagne.

Considering that Bachelor In Paradise is where their love story began, it's only fitting that their proposal took place, too. As a quick recap, they met on Season 2 of BiP back in 2015, and their relationship has been a journey for the pair and fans alike. (If you want to follow all the ups and downs, this timeline of Ashley and Jared's relationship should do the trick.)

It was just last month on May 22 that Ashley and Jared announced they were back together, and fans couldn't have been more excited. They debuted the big news via Instagram, really living up to the phrase "Instagram official." Ashley posted a photo, standing in a sea of flowers alongside Jared with the caption, "I love my boyfriend." On his end, Jared shared a smiling selfie alongside her, writing, "I came here tonight because when you realize you want to spend the rest of your life with somebody, you want the rest of your life to start as soon as possible."

To really let fans in on their love story, Ashley and Jared filmed a 44-minute video called "Ashley & Jared" as part of her YouTube series called The Story Of Us. In it, the two recount all the highs and lows of their relationship, including details fans hadn't heard before. Yes, that means there were mixed signals and other relationships in between — basically, they've been through it all together.

Knowing just how long it took for Ashley and Jared to get to this point makes their engagement all the sweeter. Sure, it might seem fast, in terms of when fans found out they got back together, but as their comments about each other have made clear, they've always felt like this was meant to be.

Making their love official on Bachelor In Paradise just feels like the perfect next step in their love story. And if history has a way of repeating itself, maybe the following summer these two will pull a Carly Waddell and Evan Bass and tie the knot in front of all their friends in Mexico. Oh, and obviously, Bachelor host Chris Harrison needs to be there for the nuptials — no doubt about it.

But let's not get ahead of ourselves and jump ahead to the wedding just yet. These two just got engaged and that's more than enough to celebrate in the meantime.