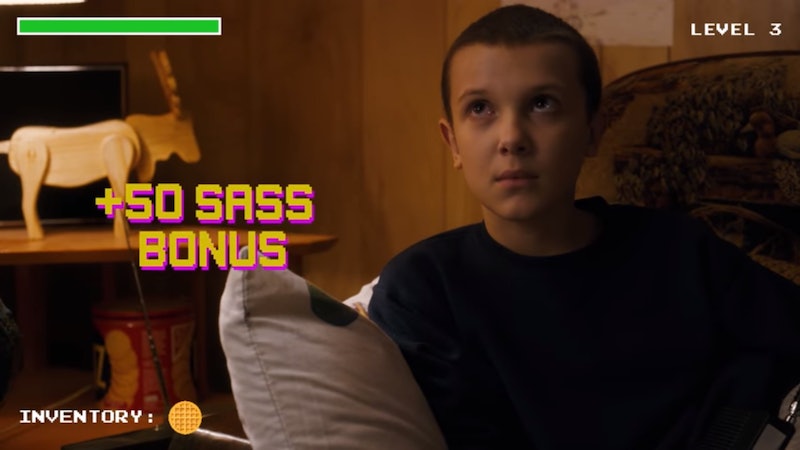 The love letter to the '80s that is Stranger Things turned its Season 1 recap into an ode to retro video games. And you're going to want to go ahead and award Netflix with 1,000 extra cool points now, because this video is a work of art. Rather than simply tell you what happened after Mike met Eleven, the recap turns their adventures into a video game on par with the first Zelda or Metroid. Yes, it's just as delightful as it sounds.

Suddenly, Eggos are fuel, a withering stare from Eleven is a "sass bonus," and the fate of Barb is turned into a choose your own adventure game that could have had a much happier outcome (if only you could actually click on the "go home" option). While some of the show's fans are too young to have played the classic games that inspired the quirky recap, it's so much fun, that will hardly matter. More than anything, the video will make you long for a real 8-bit Stranger Things game, whether you're a classic video game devotee or not.

In 2016, an indie game company released a snippet of a fan tribute Stranger Things video game that made a splash on the internet. While it consisted of just one playable scene, it gave viewers a taste of what a retro Stranger Things game would be like. If it left you wanting more, then the official Netflix recap of Season 1 is for you.

Revisit all of the best moments from the premiere season — like Eleven using her telekinetic abilities to save her friends and Steve's fancy bat moves — from a new perspective. Anyone who grew up watching their older siblings play adventure games on classic consoles will be instantly transported to their childhoods when little prompts like "stay or explore?" pop up onscreen.

As usual, the nostalgia factor is just part of the fun when it comes to Stranger Things. More than anything else, this witty recap will leave you wishing October would get here already. It's been more than a year since fans last checked in with Eleven, Mike, Dustin, and the rest of the residents of Hawkins, and seeing your favorites again will have you itching to return to their Upside Down-plagued world.

When the recap ends with a "to be continued" message, you're going to wish it really was a video game, if only so you could pop the next cartridge into your Nintendo and see what happens to Eleven next. Luckily, fans will get to find out when Season 2 returns on Friday, Oct. 27.