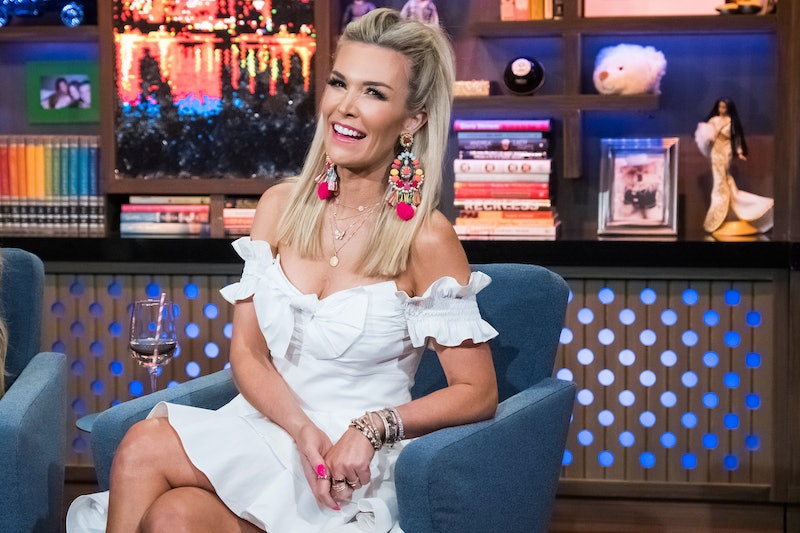 The last time fans saw Tinsley Mortimer on The Real Housewives of New York, she was constantly insisting that she was truly broken up with her ex-boyfriend Scott Kluth. But ahead of Season 12 premiering on April 2, Tinsley and Scott are together — and proving just how serious they are this time around, they're engaged.

In the Season 11 finale, Tinsley's fellow Real Housewives accused her of still being "in the mix" with Scott, the Chicago-based CEO of the website CouponCabin. They had a tumultuous long-distance relationship between Chicago and New York and their relationship status was still a hot topic at the RHONY Season 11 reunion, which aired in July 2019.

Despite all of her denials, Tinsley had seemingly confirmed that she actually was back with Scott in October through an Instagram post. The pair really made it official when Scott proposed to Tinsley at the Chicago Water Tower on Nov. 24. Four days later on Thanksgiving, Tinz posted a photo of them kissing with her ring on display with the caption, "Sooo much to be THANKFUL for!!!" A week after the proposal, she posted a video of the festive engagement that included Christmas carolers. She called Scott the love of her life in the caption and the song "A Thousand Years" by Christina Perri played over the video.

In February 2020, Tinsley celebrated the three-year anniversary of them meeting through her RHONY castmate Carole Radziwill by having them wearing the same outfits they wore when they were set up on a date. She also shared a Valentine's Day post of their dogs, Strawberry and Shortcake, where you can spot Tinz and Scott in the window of their Chicago home.

Ahead of the Season 12 premiere, Tinsley spoke to E! News about their wedding plans, which are currently on-hold due to the coronavirus pandemic. After previously considering a wedding in Japan, she said, "We're kind of just waiting to see what's going to happen with the world. But we have some really good ideas that we can sort of put [in place] once we know really officially when we're going to be able to travel again and be out."

Tinsley claimed they want a "small wedding" and it may not be in Chicago or New York. She also said for her second wedding (she was previously married to Topper Mortimer) that most likely "one or two" of her RHONY costars will be invited. Which ones may depend on how the women react to the news that she's back with Scott. The preview for Season 12 showed that the rest of her Housewives will learn that they're together again, so the Scott drama on RHONY is far from over. But at least in this season, Tinz's love for Scott can be out in the open.