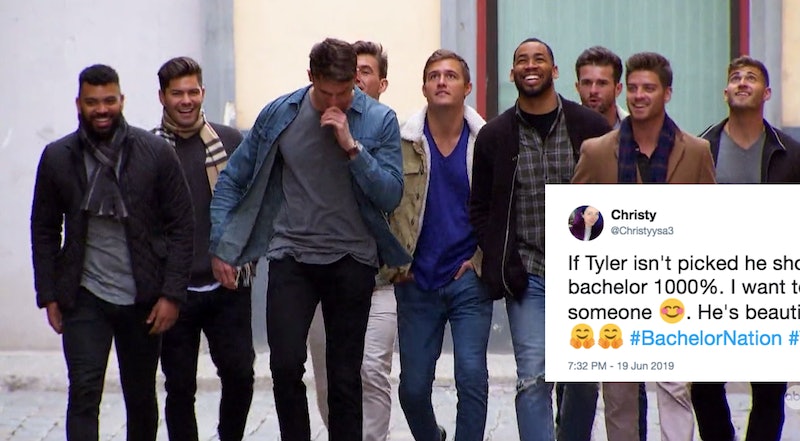 Considering that Luke P. and Jed are still on The Bachelorette, it's hard to predict who Hannah Brown will pick in the end. On the bright side, it seems like there will be a catch (or three) left when it's over, i.e. there are some prime candidates to be the next Bachelor, according to Twitter. At this point, it's tough to fully understand Hannah's decision-making, but fans have faith in the producers — or at least they're hoping their tweets get read by them.

Hannah should pick Tyler C., Peter the pilot, or Mike, but will she? At this point, it seems unlikely. For inexplicable reasons, she can't seem to resist Luke P.'s toxic masculinity and Jed's blatant attempts to promote his music. Hannah's love life is out of our hands, unfortunately, but if fans are vocal enough about the next Bachelor, maybe it'll increase the likelihood that a good guy will be chosen.

The past three Bachelor leads have been a total surprise. Let's switch up that trend and pick one of the guys that fans have literally been asking for. When it comes down to it, there are three men in the running — or at least three men who should be considered: Tyler C., Peter, and Mike.

At this point, Tyler seems like the choice to get that final rose. The chemistry is there. The conversations go deep. And most importantly, he actually seems sincere. If Tyler and Hannah (somehow) don't end up together, he truly deserves to be the Bachelor.

Tyler and Hannah's relationship is always moving forward. He's all about going there with his emotions and avoiding useless small talk. And, obviously, he's good-looking. Tyler can bring it all to the table as the next lead.

It's such a tough decision: Should Tyler get the final rose? Or should he hand them out next season? Well, if Tyler is the Bachelor, there are plenty of women who would want to sign up... or look more humble with a "nomination from a friend."

Peter and Hannah amped up the chemistry in that sauna. Does this mean that he might actually end up with Hannah? If not, fans are all pretty invested in him finding love at this point. He would be a great Bachelor.

The only downside of of Peter becoming the Bachelor is that Jake Pavelka already had a pilot-themed season, but why not try it again?

The moral of the story is that fans want happiness for Peter. He needs to be with Hannah or be the next Bachelor. Bachelor in Paradise will not suffice.

Fans have loved Mike since the get-go. It will be extremely disappointing if he's not the lead.

Even though The Bachelorette is technically a competition, Mike seems to want the best for everyone (minus Luke P.). Someone who is that kind and encouraging would be a great Bachelor.

Come on. It has to be Mike. He has it all going for him, including the best personality by far. Hopefully producers are scrolling through Twitter and realize Mike would be a great Bachelor lead.

No shade, but shade — the last three Bachelor leads were way out of left field. Everyone expected Jason Tartick or Blake Horstmann to be the star before Colton Underwood was announced as the Bachelor. Peter Kraus was the prince that was promised, but we ended up with Arie. Everyone from JoJo Fletcher's Bachelorette season was bypassed for Nick Viall. Let's break the "surprise" trend and actually give the fans what they are asking for. The viewers want Tyler C., Peter, or Mike.