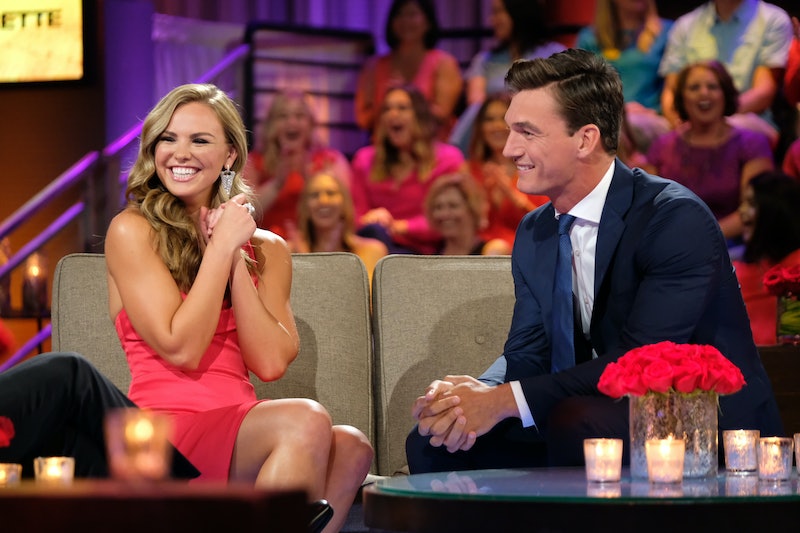 The self-proclaimed "Quarantine Crew" is at it again. During a March 27 Instagram Live broadcast, The Bachelorette's Tyler Cameron addressed Hannah Brown dating rumors in a now-typical playful way. While participating in a virtual group workout session, which included friend Jacob Laham, a fan naturally asked if the Bachelor Nation stars had rekindled their relationship. "Me and Brown Bear are dating, yes, I confirm," Tyler responded. As he previously noted on Twitter, however, "Brown Bear" is actually Laham's nickname, not Hannah's.

The Bachelorette Season 15 alums have certainly done their part to fuel speculation, however. Hannah joined Tyler in Florida in early March to attend a memorial service for his mother Andrea, who died of a brain aneurysm on Feb. 29, according to People. Despite flying back home afterward, she returned to the Sunshine State days later and has been in isolation with Tyler and other friends (including Tyler's roommate and future Bachelorette contestant Matt James) amid the new coronavirus pandemic. Dubbing themselves the "Quarantine Crew," the group has been living it up, creating lively TikTok and Instagram videos.

They've been having fun with the romance rumors all along, too. While doing their own version of the "Flip the Switch" TikTok challenge, the group captioned their March 19 post: "BREAKING: Tyler finally got into Hannah's pants." Other comedic videos have shown Tyler teaching Hannah how to say his name, as well as the duo playing spin the bottle.

Despite the flirtation, a source told E! News on March 18 that Tyler and Hannah are just friends. "There is definite chemistry between Hannah and Tyler, but they are not dating," the insider revealed. "They both have expressed they are not in a position to date right now but do care about each other. They have both been through a lot recently and are supporting each other through it."

After sending Tyler home during her Bachelorette season, "single girl" Hannah asked Tyler out on a date on ABC's July 2019 After the Final Rose special. Following the broadcast, Tyler reportedly spent the night at her Los Angeles apartment, but hopes for a romantic reunion were short lived.

For now, these two are playing coy when it comes to dating rumors, but never forget anything can happen in Bachelor Nation.

More like this
10 Photos Of The Wildest Limo Arrivals From 'The Bachelor' Premiere
By Brad Witter
A Guide To All Of Zach Shallcross' 'Bachelor' Filming Locations
By Brad Witter
Zach Swears He Didn’t Look Up Contestants Before The Bachelor Began Filming
By Brad Witter
It's Official: Molly-Mae Hague & Tommy Fury Are Parents
By Sophie McEvoy and Sam Ramsden
Get Even More From Bustle — Sign Up For The Newsletter
From hair trends to relationship advice, our daily newsletter has everything you need to sound like a person who’s on TikTok, even if you aren’t.