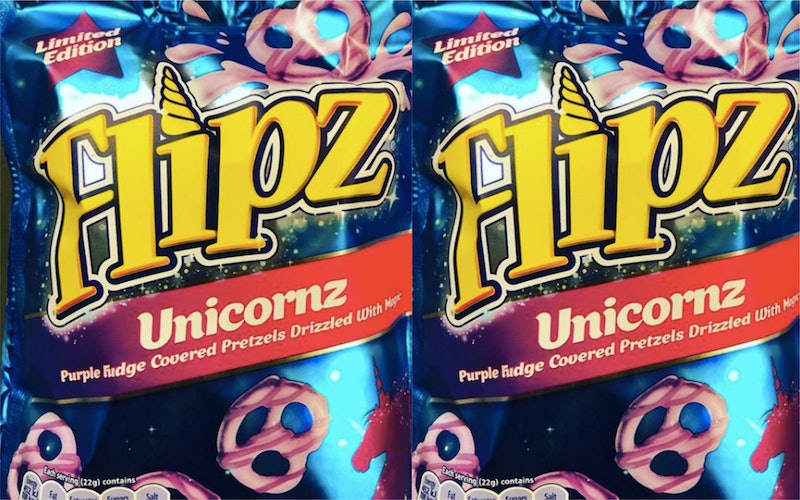 Once in a while you get a hankering for a snack that can only be satisfied by something magical. Average munchies won't fill the void in your stomach that yearns for fairytale fare. But, fear not dear reader, there is hope yet for finding the storybook snack of your dreams. The limited edition Unicorn Flipz are covered in PURPLE FUDGE.

Flipz are a brand of chocolate-covered salted pretzels that have been a snack aisle staple for more than 20 years. You can typically find them in milk chocolate or white fudge flavors, but a few new ones have popped as of late, too. Per the Flipz website, the available flavors in addition to the classics are chocolate mint, sea salt caramel, and birthday cake.

But, really, nothing even compares to the Unicorn Flipz. Plus, they seems to be so new, they aren't even on the brand's website yet. The lavender sweets were posted by British confection retailer @GBGifts, and have since been spotted by a number of other snackstagrams. Where to find Unicorn Flipz on this side of the pond is a little unclear, though. A brief exploration of social media makes it seem as if these are currently a U.K. exclusive — Bustle reached out to Flipz, but at the time of publishing, the availability hasn't been confirmed.

If you follow food trends, you know Unicorn Flipz are in fact part of a long line of culinary creations inspired by the mystical, horned equine. Sparkly, pastel, and otherwise fantastic food has been capturing hearts and iPhone cameras for a while now. One of the most notable examples of this was available for mere days in 2017. Starbucks' Unicorn Frappuccino dazzled and disgusted coffee drinkers far and wide. The coffee-free iced beverage was bright blue and magenta, slightly sour, and tasted vaguely of mango. There was also some magical flavor-changing powder involved. Whether you tasted it or not, the Frappuccino was dazzling, and might have been the catalyst for the entire unicorn food fad.

At the end of 2018, Google Trends revealed that "Unicorn Cake" was the most Googled food of the entire year. Yes, number one. What this reveals is just how popular the food trend is. From Pinterest to Instagram to a lot of boutique bakeries in NYC, the unicorn is perhaps the biggest dessert inspiration since... ever.

If you were one of those to try your hand t making a unicorn cake, hats off to you. But, those of us who weren't so confident in our kitchen chops had ways to bring some magic to the kitchen. One example is the massive marvel that is the 3-Tier Unicorn Layer Cake from Sam's Club. A base layer covered in pastel stripes is topped with a middle layer coated in sprinkles, and finished with a topper depicting a unicorn face and plastic golden horn. With the ability to feed 66 people dessert, this cake is far from a show-stopping centerpiece (though, it does do a an excellent job of that).

Rumor has it sloths may overtake unicorns as the trendiest animal this coming year, but there's no way they can best a fairytale creature in the food category.