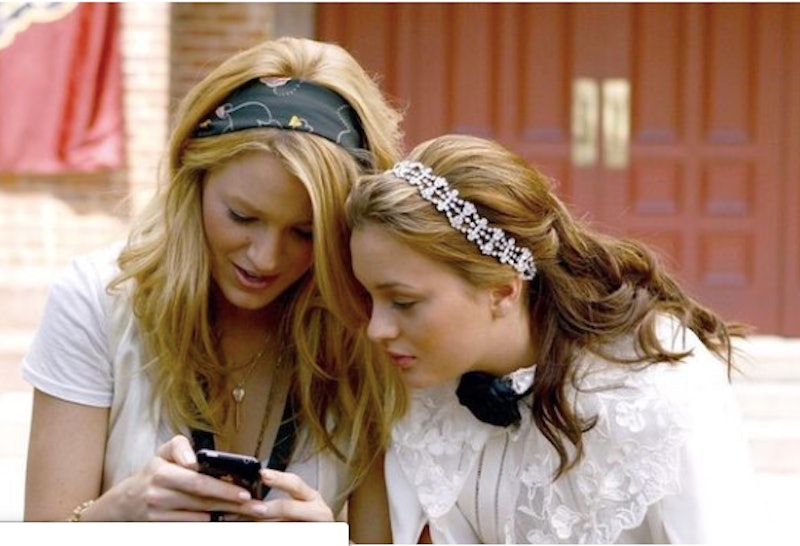 Imagine an unsuspecting single friend swiping away on Hinge or Tinder, spotting a familiar face, realizing they've caught your partner on a dating app, and almost dropping their phone. They quickly send a screenshot of their profile your way, and just like that, you learn your relationship isn't as solid as it seemed.

"When you first find your partner on a dating platform, thoughts automatically start racing through your head, and you can’t help but think of the worst possible scenarios," Maria Sullivan, a dating expert and vice president of Dating.com, tells Bustle.

Stephanie, 27, didn't want to wait to process those feelings. When her best friend informed her that she'd found Stephanie's partner on a dating app, she immediately decided to confirm her worst suspicions. "I logged into her account and messaged him as her for a little bit and then asked if we could text," she says. "I wanted to make sure it really was him instead of just someone using his picture."

Experts say the discovery of a partner's dating profile is most often met with shock and disbelief, followed by suspicion. And while some scenarios can, in fact, be the result of a case of identity theft or an account that has deactivated, for Stephanie, her fears were confirmed. "He shared his number, and sure enough, it was my then boyfriend’s phone number," she recalls. "It was gut-wrenching. We had dated for almost two years, and I had no inclination that anything was wrong or that I shouldn’t trust him."

It can take a while to establish a sense of mutual trust in your relationship, Sullivan says — but this kind of breach can be a major setback.

For Melissa, 26, catching her partner on a dating app burst her seemingly idyllic relationship's bubble. She was living with her partner, and they had met each other's families and were planning for the future. But one day, when he was showing her something on his computer, a notification from Tinder popped up. Melissa's partner responded by panicking.

"What really bothered me was that he looked like a perfect boyfriend," she says. "He spent his free time, holidays, and weekends with me, but was still scouting potential flings on his phone." When someone's online activity directly contradicts their IRL persona, it can be easy to feel deceived or "played." Genevieve, 27, experienced a similar beguilement when her coworker found her partner while swiping through an app. "I genuinely never imagined that he could or would have entertained the thought of cheating on me, let alone sought out that opportunity on a dating app," she says. "This is going to sound wildly dramatic, but it was one of the most heartbreaking moments of my life. It felt like such a breach of trust, and a boundary crossed."

According to Sullivan, swiping through a dating app while in a relationship is a form of micro-cheating, or smaller breaches of trust that could lead to infidelity down the line. Even if your partner isn't using their dating app account to cheat on you, keeping it a secret implies lapse in honesty and communication. Additionally, using an account to "look around" can indicate a lack of commitment to your relationship.

There's only one way to know for sure: By opening up a dialogue with your partner about what you've seen and how it makes you feel. If your partner gets angry when you try to start a conversation or outright tries to deny what you're alleging, Sullivan says you may have cause for concern. Your partner may be attempting to gaslight you by deflecting the blame and making you feel like you're the one at fault.

Their partner's dating profile was more than just a swipe at their confidence — it was a permanent breach of their trust.

"[My boyfriend] said that he was letting a friend use his account, but couldn’t come up with a good explanation as to why his friend would be sharing my boyfriend’s phone number," Stephanie says. "He then got mad at me for 'snooping and stalking' because that’s what manipulative people do when they’re caught." Similarly, Genevieve's partner declined her phone call when she tried to reach out for answers and later claimed his profile was old. "None of it was true, of course, but the reasons and timing hardly mattered at that point," she says.

If you catch your partner on a dating app, Sullivan suggests first and foremost taking a few deep breaths to clear your head and center your thoughts. When you've taken space for yourself to check in with how you're feeling and thinking, communicate that process to your partner. "Starting off with a conversation between you and your partner is the first step," Sullivan says, "and if they don't respond well to it, then it might be time to take it to couples therapy."

Of course, if your partner is acting in a way that feels manipulative, or you can't rebuild what's been broken, it's always OK to walk away. Genevieve and Stephanie called it quits right then and there, and Melissa ended her relationship a year later. For all three, their partner's dating profile was more than just a swipe at their confidence — it was a permanent breach of their trust.