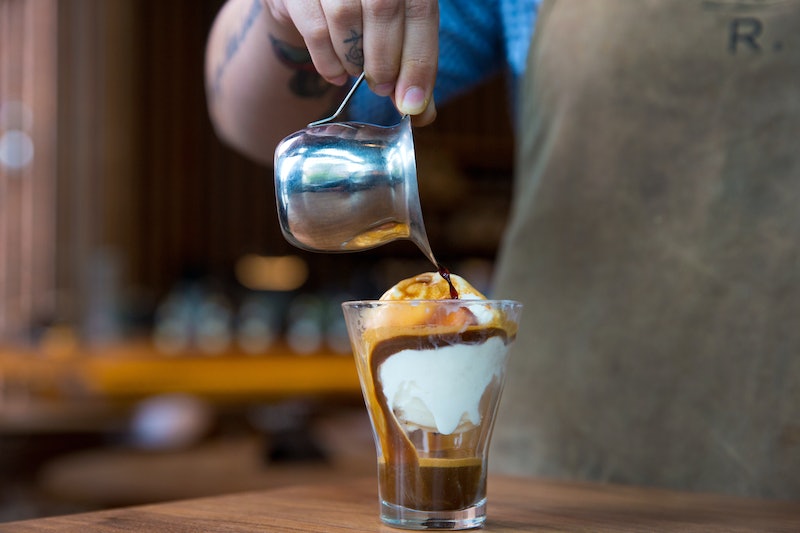 The term “break the internet” is perhaps a little overplayed these days, but I think it’s fair to say that when news erupted this week that ice cream was coming to Starbucks, it did, in fact, briefly break the internet. Of course, though, it’s not quite as simple as just going to Starbucks and getting a scoop; in this case, we’re talking about Starbucks testing affogato, an Italian dessert in which a scoop of gelato is literally drowned in espresso. But what does a Starbucks affogato taste like, specifically? I’m glad you asked. Happily, I have the answers you seek.

In case you missed it, Starbucks is currently testing out two different affogato menus: One — a larger-scale test occurring at 100 locations in Orange County, Calif. — is inspired by, but not an exact reproduction of, the affogato menu that’s been been available at the Starbucks Reserve Roastery and Tasting Room in Seattle, Wash. since June of 2016; the other, however, is much smaller — it only encompasses 10 locations around Washington, D.C., Los Angeles, Chicago, Maryland, and Boston — and features four treats straight off the Reserve Roastery’s affogato menu.

Why is the second test so small? Because this menu can only be crafted at locations that specifically have what’s called a Starbucks Reserve bar, and there simply aren’t that many of them around. In fact, until this week, I didn’t even know that Reserve bars were even a thing, and given how in tune I am with Starbucks-related goings on… well, that’s a testament to how well-kept a secret they are. (Not that the Reserve bars actually are secret, but, well… you get what I mean.)

To understand what a Starbucks Reserve bar is, first you need to understand what the “Reserve” part means (although if you’re uninterested in all this, feel free to scroll down to get to the actual taste test portion of this piece. The drink names are bold; you can't miss 'em). You probably know about the Starbucks Reserve Roastery and Tasting Room, pictured here, which opened in Seattle to great fanfare in December of 2014; no mere coffee shop, it functions as both a place for the brand to experiment with new drinks (some of which later find their way to stores nationwide, like the Smoked Butterscotch Latte and the Cascara Latte) and for coffee fans to learn more about what actually goes into the creation of their favorite beverages. You’ve probably also heard that there are plans to open Reserve stores in other cities, too — like Chicago, for example. But what you may not be aware of is that the fact that some regular Starbucks stores have recently been outfitted with Reserve bars.

While not nearly as large as the original Roastery, locations with Reserve bars are kind of like a hybrid between a regular Starbucks store and the perks of the Reserve stores or the Roastery: Sure, you can get all your favorite Starbucks standards there; however, you can also get a taste of some of the special stuff that’s typically only available at the Roastery. The Washington Post reported in December of 2016 that over the next five years, Starbucks plans to add Reserve bars to about 20 percent of its regular locations.

You can therefore imagine how thrilled I was to discover that I live within easy travel distance of not only a Starbucks with a Reserve bar, but — even better — one of the 10 Reserve bar locations that’s testing out the Roastery’s exact affogato menu. Clearly, this meant that my purpose in life was to go that Starbucks, test out as many affogato concoctions as I could, and report my findings to the masses. It’s kismet.

So that’s exactly what I did. In the name of research, I hoofed it to the Starbucks located in Washington, D.C.’s Brookland neighborhood, where the Reserve bar has been open since November of 2016. It’s quite beautiful inside — like a classy cocktail bar, only for coffee instead of booze. (I am not generally a classy person, but I could at least pretend to be one while I was there. That counts for something in my book.)

I tried three of the four Roastery Affogato menu options: The Classic Affogato, the House Affogato, and the Cold Brew Malt. I did not try the Cold Brew Float, because honestly, by the time I got through the previous three drinks, I did not have space in my stomach for another 12 ounces of coffee plus another scoop of ice cream. (Trust me: It’s better that I left it untried. If I had attempted to consume anything else at that point, it would have ended… poorly.) For the curious, the float looks like this:

The prices of this particular menu are a little steeper than you’re perhaps used to paying at a Starbucks, but that’s because the espresso and coffee used is all Starbucks Reserve — the fancy stuff the regular stores don’t usually have. (And let’s not forget that the ice cream is also special; it comes from Mora Iced Creamery, a local Washington State delicacy.) A Classic Affogato will set you back about $6 for 5.5 ounces; a House Affogato is about $6.50 for six ounces; a Cold Brew Malt is about $8.50 for 12 ounces (so, about the size of a standard Tall); and a Cold Brew Float is $7.50 for 12 ounces or $8 for 16 ounces.

Here’s what I thought of the three I tried.

The Classic Affogato is exactly what it says it is: A classic. It consists of two shots of Starbucks’ Reserve small-lot espresso poured over a scoop of Mora Iced Creamery vanilla ice cream… and it’s fantastic. If you like your coffee to taste like, y’know, coffee, you’ll probably dig this one. The strength of the espresso (and it is strong) contrasts nicely with the creamy sweetness of the ice cream. It’s quite sophisticated, really. Also, it’s a delightful texture. I mean, I realize that I’m the kind of person who orders root beer floats specifically for the last couple of sips at the bottom where the ice cream has melted completely into the root beer — but if you, too, are that kind of person, know that the Classic Affogato is basically a whole cup of that, just with espresso instead of root beer.

The cinnamon is a nice touch; it adds a subtle kick (which, given how much sweeter this one is than the Classic Affogato, I think is necessary to balance it out). I did, however, manage to accidentally inhale some of the cinnamon dust while I was consuming this one, which was a little bit awkward. Learn from my mistake: Eat it with the spoon provided, rather than by trying to drink it straight from the glass.

Do you like milkshakes? If yes, this one has your name written all over it, proverbially speaking, because that is exactly what it is. Spindle-blended using Reserve small-lot cold brew, vanilla ice cream, and chocolate bitters, this one tastes — I kid you not — exactly like a Whopper. The candy, I mean — not the burger. To me, that means it also tastes like Halloween (my trick or treat bags as a kid often ended up full of Whoppers); for you, though, maybe it will taste like something else. Maybe you associate Whoppers with going to the movies. That’s cool, too. Then again, maybe I’m just weird and other people don’t have these strong flavor-memory associations. That is also OK.

What I’m saying is, this thing is essentially a giant malted milk ball in milkshake form. It’s delicious. (I do not know, however, whether it will bring all the boys to your yard. Sorry.)

They’re good. They’re all good. My personal favorite, though, is actually the Classic Affogato. I mean, don’t get me wrong — I definitely do have a sweet tooth, so if a House Affogato or a Cold Brew Malt just magically happened to appear before me, I certainly wouldn’t say no to either. But there’s something about the bitterness of the Reserve espresso paired with the ice cream that just really does it for me. That’s totally personal preference, though; if you’re not super into strong, strong coffee, you may feel differently.

In any event, if you happen either to live in the Seattle area (and therefore have access to the Reserve Roastery and Tasting Room) or near one of the Starbucks Reserve bar locations with the test menu, I highly recommend stopping by at some point to give the affogato menu a shot. Or hey, if you live in Orange County, go hunt down one of the 100 locations with Roastery-inspired affogato menu instead. I live on the other side of the country, so I’m depending on those of you on the West Coast to enlighten me about what those versions of these treats taste like.

It may still be winter where I am, but it’s always a good time for ice cream.