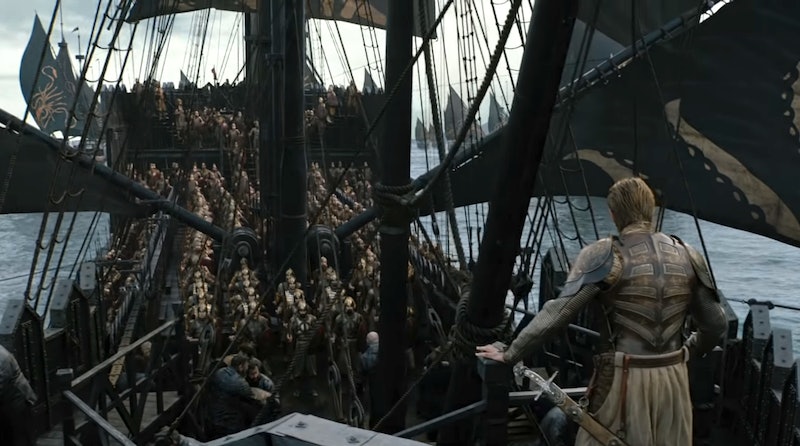 Game Of Thrones Season 7 and book series spoilers ahead. Uncle Euron sure seemed to be a selfish coward when he fled the Dragonpit during the Game of Thrones Season 7 finale. But as Cersei revealed to Jaime later, Euron Greyjoy didn't really head back to the Iron Islands upon seeing the White Walker wight — he went to hire the Golden Company in Game of Thrones. Cersei knows she doesn't have the numbers to defeat Daenerys' Dothraki and Unsullied armies, so she has hired these Essos sell-swords to help her keep the Iron Throne.

The Golden Company has only been spoken of a few times on Game of Thrones, but this group of 20,000 men, horses, and potentially elephants has played a larger part in George R. R. Martin's books. While the HBO series will most likely simplify their storyline when the final season premieres on April 14, you can still expect them to cause trouble for Daenerys and Jon in Season 8.

On the TV show, the Golden Company was first brought up by Davos in Season 4. He suggested that Stannis hire them to help him win the Iron Throne since their numbers weren't looking good (how right Davos was). But Stannis ultimately refused — plus, he didn't have any money to pay these soldiers anyway. Later in that same season, Daenerys revealed that Jorah Mormont had fought for the Golden Company before he served (well, spied on) her brother Viserys. But it wasn't until Season 7's "The Spoils of War" that the Golden Company being hired by a Westerosi leader became a real possibility when Cersei said that Qyburn had reached out to these mercenaries.

And by the season finale, Cersei had Euron traveling to Essos to ferry the Golden Company — and their reported war elephants — her way.

Although Euron isn't really a character anyone should trust, the Season 8 trailer hinted that he will fulfill this task for Cersei. After all, he does want to marry her, and because Euron claimed he was going back to the Iron Islands, Daenerys and Jon are unsuspecting of Cersei's plan. So until Jaime catches up to them in the North, they won't know that Cersei has hired a powerful group of sell-swords to fight for her. (They also won't know that Cersei has no plans of sending her armies to help them fight the White Walkers.)

That means Daenerys and Jon may have another war to fight against the Golden Company after their battle with the Night King.

In the books, the Golden Company has a very different connection to Daenerys and Jon — aka, Aegon Targaryen. Not only were they founded by a Targaryen bastard in the past, but Prince Rhaegar's other son who is also named Aegon, is allegedly hanging with the Golden Company. Rhaegar and Elia Martell's son was said to be killed by the Mountain, but in the books, a young man going by the name "Young Griff" claims to be this Aegon and the Golden Company swears allegiance to him.