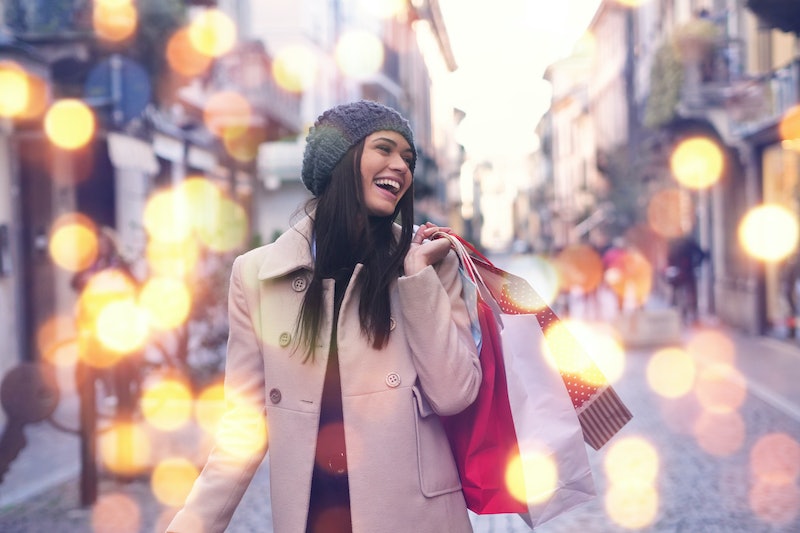 The final Mercury retrograde period of the year is currently in full effect and will rage on for nearly three full weeks until it goes direct again on Nov. 20 — meaning we'll narrowly avoid having another Thanksgiving Mercury retrograde, as we did last year. But, sorry folks, this doesn't necessarily mean we're in the clear: You should still be aware of how Mercury retrograde could affect your 2019 holiday plans, cause there's a little cause for concern.

Let's talk about a little thing known as the retrograde shadow period - or the retroshade, as we like to call it. For about two weeks before and two weeks after a Mercury retrograde period, even though the planet is technically moving direct, it's still considered to be under the retrograde's "shadow." During this time, the typical retrograde effects begin to emerge (in the case of the pre-shadow period) and then continue to linger (in the case of the post-shadow period). But retroshades serve a purpose: To ease us into a retrograde and give us a chance to tie up loose ends, as well as to give us some time to integrate the lessons we learned post-retrograde instead of jumping directly back into life as usual.

While Mercury retrograde itself ends on Nov. 20, Mercury retroshade fall 2019 goes on until Dec. 7. So while the skies will be clear by the time the end-of-December holidays roll around, we definitely still have to deal with Thanksgiving being a wee bit retro-shady. "With Mercury Rx still affecting us until the 7th of December, 2019 — thanks to its shadow phase — celebrations like Thanksgiving, Black Friday, or trips for the holidays will be influenced by this phenomenon," explains astrologer Didi Daze, who spoke with Bustle. "Knowing we are all still under the influence of Mercury Retrograde will give you the upper hand on how to deal with it and navigate it smoothly."

Bustle chatted with Daze along with astrologers Lisa Stardust and Shawnte Cato, who helped us dive into exactly how Mercury retrograde could throw a wrench in your 2019 holiday plans.

Traveling during Mercury retrograde practically guarantees snags of all kinds — and unfortunately, there's still a good chance we'll be experiencing those sorts of mishaps during the retroshade, too. "There may be delays when traveling and flight cancellations due to unforeseen issues," warns Stardust. "Don’t stress! It’s all part of retroshade." Keep calm and prepare yourself in advance.

Whether it's catching a flight across the country or simply making sure you've got the correct time, address, and assigned potluck dish for the in-town Thanksgiving celebration you're attending, you'll want to take extra precautions to be clear about holiday plans during this retroshade. "Since Mercury rules trips and communication, your best bet is to triple check your paperwork, schedules, or anything important to minimize [the retroshade's] negative aspect," explains Daze. A little pre-planning (and quadruple checking) goes a long way in negating retroshade confusion.

"[B]e advised not to argue during dinner, as you may have a heated discussion over an old issue or miscommunication," advises Stardust. Communication channels still haven't completely cleared thanks to the retroshade, so try to keep it light when it comes to holiday dinner convos. "Also, expect people to be combative and reactive," warns Cato. "Mercury and Mars in Scorpio can lead to people not holding back about dissatisfaction." So yeah, if your picky aunt hates the taste of the vegan pumpkin spice cupcakes you brought to the function, she just might tell you — just do your best not to fly off the handle when she does.

We've all seen how dramatic Black Friday shopping can be, so hopefully yours isn't too wild — but simply be aware that all may not go according to plan, as the retroshade has a tendency to funk those up. "Be open to the possibility of not having your credit card work correctly and losing that hot sale on Black Friday," warns Daze. With timing, tech devices, and transportation still feeling off, don't be surprised if your shopping day looks a little differently than you thought it would.

Black Friday Receipts (And Return Policies!) Are A Must

If you're hitting the mall for Black Friday sales, be sure you're reading the fine print, double checking your receipts for errors, and most importantly, keeping your receipts, cause you might need them. "Always keep receipts for purchases — or get gift receipts — as you may need to return them in the future," advises Stardust. "Items may not be advertised at the actual price and you may wind up purchasing the wrong gift by accident. Be careful!"

Mercury rules over technology, so with its retroshade still in full effect, shopping for new tech devices might not be the smartest idea during the Black Friday/Cyber Monday rush. "Be mindful of buying anything that’s too new on the market, as there could be more information coming to light about its technology down the line," explains Cato. If you do spot tech deals that are too good to pass up, be sure to read all the fine print and make sure you've got a solid warranty in place in case of technological issues.

Try To Keep A Go-With-The-Flow Attitude

Overall, practicing patience and expecting the unexpected during both retrogrades and retroshades is bound to be helpful. "If you’re flying, shopping, or just spending time with family and sudden changes occur, do your best not to be too defensive or aggressive when communicating," advises Cato. All the Scorpio influence on this year's final Mercury retrograde might make us feel edgy, but keeping it chill will benefit everyone in the long run, especially when emotions are running high around the stressful holiday season.

Leave Time In Your Schedule For Emotional Processing

The holidays are always busy for most of us, but it's direly important to carve out some time to process the lessons that you learned during the retrograde. "The second Mercury retrograde shadow is all about integration and processing," wrote the AstroTwins on AstroStyle. "Use the time Mercury turns direct to the end of its shadow to make big, bold changes. For example, maybe you realize that your jerk of a boyfriend was actually just responding to YOU being subtly critical of his every move. Eek!" If you don't take some time out to process what you've learned and experienced during the retrograde, you might keep making the same mistakes over and over again. Don't skimp on this important step.