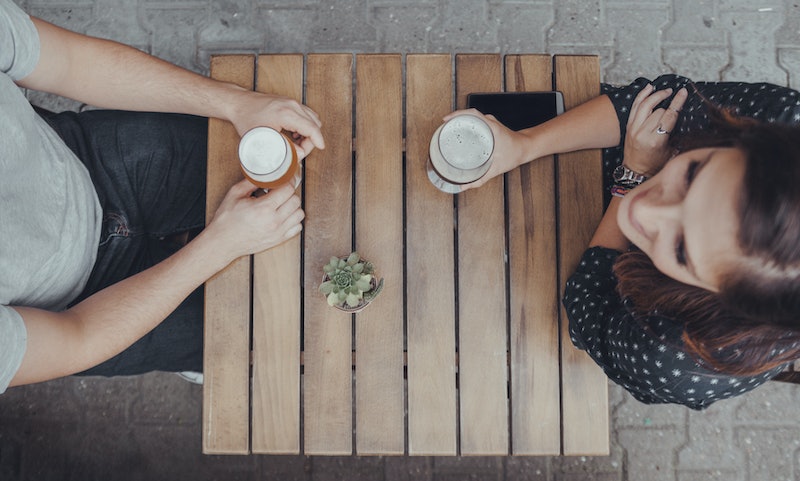 After years of dabbling in online dating, I've had (perhaps more than) my fair share of dates, and thus spent a lot of time pondering the age-old debate: who should pay for the first date? It's a touchy subject, and there's more than a little gray area. You can't go wrong by going Dutch — what could be more fair than each person paying their own way? And thanks to feminism, it's also chill if a lady offers to cover the bill for sushi and sake. But of course, there's the more traditional mindset that (in heterosexual relationships) it's polite for the guy to get the tab on a first date.

According to a recent survey of 500 Millennial New York City users on Dine dating app, 72 percent of women felt it's always the man's job to pick up the check on a first date, while only 52 percent of men agreed with that sentiment. Still, the majority of those surveyed concurred that, as a general rule of thumb, it's the man's responsibility to pay, which says a lot about the perseverance of (now slightly outdated) gender roles and customs.

"We are certainly living in a different age than our parents were," Michael Tudda, Dine's Marketing Director, said in a press release. "The traditional ‘social norms and expectations’ when out on a date are not really practiced by our millennial generation. But with all the controversy surrounding how men and women should work towards closing the gender neutrality gap, it was very interesting to find that the majority of both men and women still prefer the man to pay the bill when out on a first date. It says a lot about how deeply ingrained this old school dating custom is within our culture."

Lots of Millennials are ~woke~ about gender issues these days, so why do so many people still ascribe to this more traditional custom of the man paying on a first date? One theory is that it's actually not about the money — it's about what the money signifies. In a 2016 Salon article, Laurie Davis Edwards, founder of dating concierge service eFlirt, said paying the tab is a subtle way to confirm romantic intent.

"It’s meant to set the tone — that this is and was a date, not a networking opportunity or a new friendship," Davis Edwards told Salon.

But shouldn't that go both ways? It's totally plausible that a woman might make the first move and initiate a date — shouldn't it then be her responsibility to pay so the invitee is clued into her intentions? In theory, yes, but clearly that's not yet the 'norm,' because plenty of guys have picked up the check even if, technically, I asked *them* out. In any case, I'd say a good rule of thumb is that the person who suggests the place, gets the tab. That way, if your date fails to properly Yelp beforehand and is blindsided by the cost, they won't have a mini crisis when they realize every entree is $30.

As a perpetually broke New Yorker, I have to admit that I usually find myself hoping my date will offer to grab the check — and truthfully, they usually do, for which I'm grateful. Nonetheless, I've learned that if you can't at least cover your own food/drinks/movie ticket/whatever, it's probably a better idea to stay in and have (another) Netflix marathon. It's not nice to assume someone can (or will) cover for you — being an adult means learning to say no if you can't or shouldn't go out.

Yet here I sit: 23, broke, and still actively dating because hey, who doesn't like cuddling and having sex on the reg? Dating in NYC has been a bit of a struggle for someone with limited cash — here are five things I've learned about dating while broke.